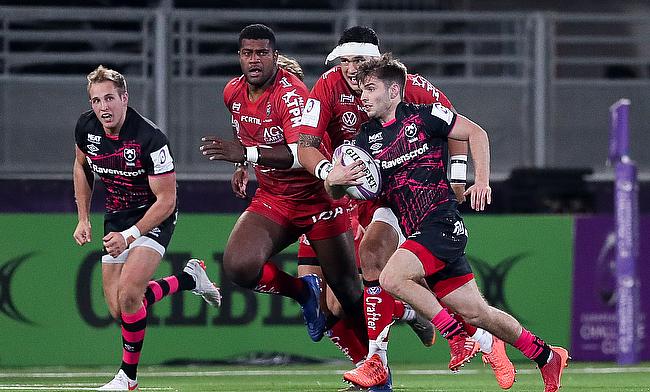 As the diminutive figure of Harry Randall walks around one of the many corners at The Lensbury Hotel, he does so as one of England's more 'experienced' players.

'Experienced' might be a very generous term to label the Bristol Bears scrum-half with considering he has represented his country on just six occasions, but in fact, 16 of the 35 names currently in Eddie Jones's training squad are uncapped.

With Manu Tuilagi, Henry Slade and Kyle Sinckler all missing - along with the absent Premiership semi-finalists - there is an unfamiliar feel about this group of England players as preparations continue ahead of their tour to Australia.

With so many new faces in camp, Randall knows what it is like to step into the international environment and he has been more than happy to offer a helping hand to the younger players who are linking up with the squad for the first time.

"Not just myself, it is a credit to the whole squad that we are building that togetherness now that, no matter who is in camp, we get behind each other and get to grips with everyone and everything as quick as possible.”

After starting three of England's five games in the Six Nations earlier this year, the livewire No.9 will also be keen to focus on his own aspirations as he looks to keep himself in Jones's thoughts with the clock ticking down towards next year's World Cup.

For many of the English scrum-halves in the Premiership, opportunites at international level have been seldom due to the consistency of Ben Youngs with the likes of Randall, Raffi Quirke, Alex Mitchell and Dan Robson all competing for the jersey.

However, the fact the 24-year-old did start ahead of Youngs against Italy, Wales and Ireland suggests Randall might be the favourite to challenge England's most-capped player.

Whilst he will be doing all he can to occupy the shirt in Australia, the Bristol scrum-half admits the learnings he has taken from working with Youngs has helped him develop his game.

“I’ve probably spoken about him before but obviously Ben Youngs helped me massively in my time as I’ve come through," Randall added. "I’ve always said he was a massive help to me coming into this environment.

"I wouldn't say its [battling for the same shirt] awkward. We are in an environment where we want the team to do as best as possible whether you are starting, on the bench or not involved. You have got to do what you can to help the team be in the best possible position to win on the weekend. You have got to get behind your mates and help them put their best foot forward."

Youngs was part of the successful touring party which came away from Australia with a 3-0 whitewash in 2016 and Jones will be dreaming of a similar outcome again as England look to put a disappointing Six Nations campaign behind them.

They have beaten the Wallabies on their last eight occasions and six years ago, Randall was watching on from Gloucestershire as Jones's side came out on top Down Under.

"I was 18 years old in Hartpury... somewhere around there," Randall said. “It’s a great opportunity for us [now] to go out there and hopefully beat them 3-0 again like the boys did in 2016. It’s a massive challenge. They are a newish squad on the rise. What better way to challenge ourselves than against an up and coming Australia team.

“We’ll really look forward to that and embrace it. What an experience it would be going away and playing three Test matches out there. Everyone is striving to put their best foot forward and it’s massive motivation seeing what the boys did in 2016.”

England face the Barbarians next Sunday before their three-Test series against Australia begins in Perth on July 2nd.