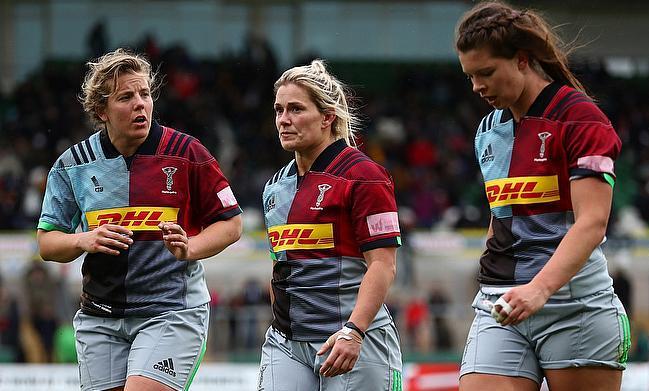 Harlequins continued their perfect start to the Allianz Premier 15s season, overpowering a gutsy Bristol Bears performance and pulling away in the last 20 minutes to secure a seventh-straight bonus point victory on a chilly afternoon at the Twickenham Stoop.

It was a closer game than the 61-17 final score showed. Through the first 60 minutes, and thanks to a quite magnificent hat-trick from jet-heeled Jasmine Joyce, Bristol showed their quality. They were steely in defence and dangerous in getting the ball through the hands and to the edge of a Harlequins defence that too often narrowed.

“The score probably flatters us a bit,” Harlequins Women head coach Gerard Mullen reflected after the game. “Credit to Bristol, they really put it up to us, they played some good rugby, and they scored some great tries.

“We have got to look at our discipline. We are still giving away a lot of penalties in attack at the breakdown, and in defence at the breakdown. The way that we want to defend, you can’t knock off. We probably had a couple of people knocking off in those periods and someone like Jazz Joyce doesn’t need that much space to punish us, and she did.”

Three first-half tries, including two for Shaunagh Brown, the free-scoring tight-head who now has eight this season, ensured Harlequins, despite some profligacy, held a 21-5 advantage at half-time. Beth Wilcock also crossed just before the interval to extend the hosts’ lead.

??A dominant performance against @BristolBearsW means it's now 7? bonus point wins in a row in the @Premier15s.

Yet Bristol had battled well, and were unfortunate not to have more to show for their efforts than Joyce’s early riposte after Brown had crossed for her first.

They began the second half even more strongly, using the width of the pitch and manipulating space well. After the left winger scythed through a loose Harlequins kick chase, quick hands after a tapped free-kick enabled Joyce, a ubiquitous menace throughout, to squeeze over in the right-hand corner.

Moments later, the Welsh flyer produced the moment of the game, showing the Harlequins defence a clean pair of heels down the left touchline to race over from inside her own half. The Bears had now narrowed the lead to just four points.

But that was as close as they came. It always appeared likely that Harlequins’ strength in depth and fitness would pay dividends in the final 20 minutes, particularly after the defensive rigours Bristol endured in the first half.

And so it proved to be in quite spectacular fashion as the home side pulled away behind a typically destructive showing from their phalanx of forward carriers.

Twice their maul, a most devastating weapon in the Premier 15s this season, produced a score. First, Amy Cokayne the beneficiary of her cohort’s powerful surge before Rownita Marston was duly sent to the sin bin for dragging another rumbling drive to the ground.

A penalty try was awarded by referee Hamish Grant and there were also scores for back-row Kristine Sommer, wing Heather Cowell and scrum-half Lucy Packer, who spotted a gap from the back of a dominant scrum as Harlequins asserted their dominance in the second half.

Replacement Izzy Mayhew added a final gloss, plucking an intercept and racing away as Bristol chased a fourth try that would secure them a bonus point.

Mullen described his side’s second-half performance as “very pleasing”, and was impressed with how Quins responded to Bristol’s comeback.

“That has been the good thing over the last few weeks, we’ve had our backs against the wall a couple of times but we have come up with the answers and the solutions and that is the most important thing. It is never plain sailing.

“I think we showed our quality in the last 15/20 minutes. It is just a pity that we couldn’t do that for longer periods, but we’ll take the positives. [There is] plenty to work on, but we’ll keep building.”

Harlequins now have an unexpected week off after the postponement of their clash with fellow unbeaten side Saracens due to a positive Covid-19 test in the champions’ camp.

That game will now take place on the 2nd of January, with the Stoop likely to welcome back a strong home crowd, with ticket sales exceptionally encouraging before the fixture was moved.

“We’ve put a lot of time and focus into our training to ensure we do stress the players as much as possible,” Mullen said of his side’s readiness for their biggest game of the season so far. “I think we have had some tough tests recently which have been great for us.

“You can’t really fully prepare for it but we like to think our training is at the standard and intensity that will prepare the girls in the best stead.”

Bristol face Worcester Warriors Women on Saturday, while Harlequins’ next game also comes against the Warriors on 20th December.

Elsewhere in the Premier 15s, Wasps FC Ladies showed their credentials as the nearest challengers to Harlequins and Saracens as they toppled Loughborough Lightning 21-10 to move into third spot in the table.

Tries from Harriet Millar-Mills, Ellie Kildunne and Abby Dow, influential throughout, enabled Giselle Mather’s side to outlast the Lightning in an entertaining clash at Twyford Avenue.

At Sixways, Gloucester-Hartpury secured a hard-fought away win against Worcester as more than 300 home fans saw their side struggle to a 15-7 defeat.

Two games fell victim to positive Covid-19 tests, with Saracens’ trip to Exeter and the battle of the Sharks between Sale and DMP Durham both postponed. Ten players are self-isolating after a Saracens player tested positive, while three positive tests were recorded in the DMP Durham Sharks squad.

Saracens’ trip to face Exeter Chiefs Women is now scheduled for the 30th of January, and the Disputes Committee will meet early this week to determine the next steps with regards to DMP Durham, who are due to face Gloucester-Hartpury this coming weekend.

Simon Middleton wants England to 'mark themselves in history'