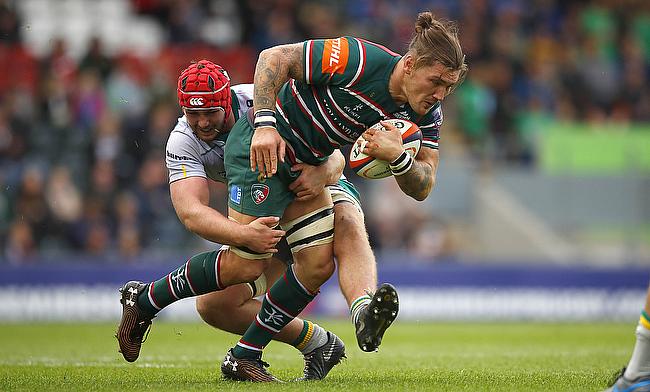 It is sometimes difficult to think that Guy Thompson is 32 years of age.

Having made his bow in the Premiership as a 26-year-old, Thompson has been a crowd favourite ever since. Starting his rugby journey at Bromsgrove School before going to Cardiff Met University, the flanker would then go on to play in the National Leagues.

A season with Richmond in National Two South was soon followed by two at Jersey. Winning promotion from National One in his first season there, Thompson stayed for one more season, helping to establish the Channel Island side in the second tier.

Moving to Wasps would follow and Thompson’s good form would follow him too. Making nearly 100 appearances for the club in that time, Thompson was part of the team that went all the way to the Premiership Final, losing out to Exeter in extra time in 2017.

Following five seasons with Wasps in both High Wycombe and Coventry, Thompson moved to the East Midlands to play for Premiership powerhouses Leicester Tigers. However, it was a far from ideal debut season at Welford Road. Matt O’Connor left the club after an opening day defeat, with Thompson’s own season disrupted by injury.

The first time the @LeicesterTigers back-line touch the ball, they take it to the house ??

Guy Thompson gets the reward for his support line. Brilliant start!#PremRugbyCup pic.twitter.com/kglURrlUbr

“I got two injuries last year,” Thompson said. “I caught an unusual stud and it ripped my knee open, which was a bit of a nightmare against Gloucester and then I shattered my finger against Quins.

"We originally thought it was going to be a couple of weeks, but it turned out to be two- and a-bit months that it just didn’t heal.

“It was kind of frustrating and was worse with the team not doing as well as you would want them to do. You’re sat on the sideline, all you want to do is contribute, do your part and you feel that you can’t.

“You try to help in other ways, doing the analysis, helping in the meetings, trying to pass on any information that you can, but it’s not the same as being able to be out there trying to push the team forward.”

Tigers finished 11th overall last season, needing a late flurry of good results to ensure their Premiership safety. Thompson made his return to the field in the Premiership Cup this September and scored a try against Exeter as Leicester ran out 27-7 winners at Welford Road.

The forward has since made two more appearances for Geordan Murphy’s side against Bath and Northampton, but the serious business begins this weekend as Thompson has been named to start in Leicester's Gallagher Premiership opener at Worcester Warriors.

Last year was tough for @LeicesterTigers, and no-one understands that more than the players themselves according to @GuyThompson87 ??

But with a long time to re-build and plenty of supreme #GallagherPrem talent to return from Japan, could they bite back? ??

Off the back of a long pre-season, Thompson believes that Leicester have learnt from last year’s mistakes and will be more confident this campaign.

“At the start of the season (last year), we felt that we had a good pre-season, but looking back, it obviously wasn’t good enough, Thompson admitted. “This preseason has been a massive step up for us as a squad.

“Going away to Exeter, we thought we were in a good place and losing quite heavily shocked us a little bit. We couldn’t build any momentum together, we couldn’t win back to back games or three games in a row, which is massive in this league.

“Before you know it, you start losing your confidence and things that you normally pull off don’t go your way and it’s really hard to battle out of it.

“I think the long pre-season has been a blessing in disguise for us this year. I know we’ve had a good pre-season. The S&C have put us through it, the coaching staff have really got us in a place where we feel confident at the moment. We just need to see exactly where we are as a squad and how much we have improved.”

Unlike previous years, Leicester haven’t been gutted by Rugby World Cup selections either.

With nine players either in Japan, or having just concluded their involvement at the tournament, Thompson believes that whilst these starting players are a miss for Leicester, it has allowed squad players to step up.

Ben Youngs believes England are “exactly” where they want to be heading in to their #RWC2019 quarter-final against Australia.https://t.co/KWpEh3Igiy

“I think it has been hugely beneficial for other boys in the squad to step up,” Thompson said.

“Last year we were very reliant on people like George (Ford). He single-handedly drove us away from losses and towards victories in a lot of games.

“He was outstanding for us. Maybe we relied on him a little too much, because when he and the other guys were away, we really suffered. This season we brought in a lot of new boys with a lot of experience who aren’t at the World Cup and that’s only going to benefit our squad.

“When the England boys and the other internationals come back, hopefully we’re in a good place, so that when they do come back in, they can add to our squad again and we can kick on.”

Leicester begin their Premiership campaign this Saturday against Worcester Warriors at Sixways in a repeat of the start of the Premiership Cup campaign that began last month.