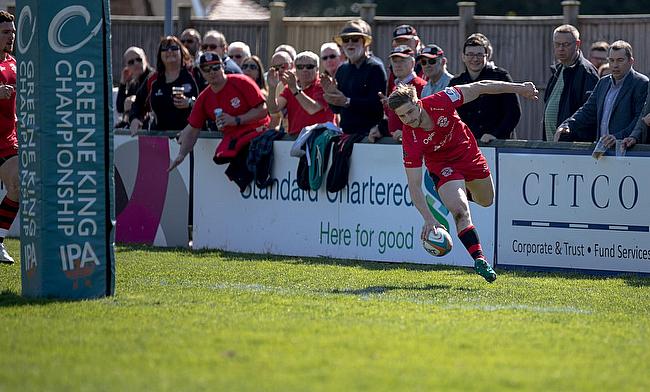 Round Seven of the Greene King IPA Championship saw some great comebacks and plenty of tries scored. Connor Hickinbottom reviews the latest round of action for TRU.

The Blues put on a dominant first-half display to lead 17-0 at the brea as two unconverted tries from Lewis Robling, Dean Adamson and a seven-point score from Rich Lane gave the hosts a healthy lead.

All of Bedford’s hard work was almost undone after the break as the Knights went on the offensive, desperately trying to avoid a fourth defeat in a row.

FT 29-28. A encouraging and battling second half display from the Knights but it just isn’t enough to claim the victory that the performance deserved. pic.twitter.com/x98bEFWDXp

Within minutes the Knights were back in the game. William Ryan powered over from short range, but for all their initial good work, a moment of magic from Adamson extended the Bedford lead further as the winger leapt through the air for an outstanding finish.

The Knights went straight back on the offensive and were rewarded as a superb break from Dave Nelson was finished off by Steve McColl.

Bedford were doing everything in their power to hold off the Donny onslaught, but to no avail as Josh Tyrell powered over to put the visitors within five points. The Knights continued to push, but with a minute left to play, Bedford scored their fifth try as Sean McCarthy touched down in the corner under pressure from three Knights.

There was still time for the Knights to earn themselves two bonus-points as Nick Civetta cut through the Blues defence.

The Championship new boys had to put up a fight as London Scottish stormed back into the game thanks to a second-half hat trick from Rob Stevenson.

It was a fantastic start to match for Coventry as scored three tries within the first 40 minutes to set up a 19-3 lead at the break. Tony Fenner, Pete White and Alex Woolford the scorers.

The Exiles rallied after the break and set about disrupting the breakdown which resulted in a try for Mark Bright. Stevenson then powered through four Coventry defenders to grab the Exiles second try and his first of the afternoon.

Coventry extended their lead further as Scott Tolmie went over at the back of a powerful lineout maul. Max Trimble went on to add Coventry’s fifth try after a loose pass from the Exiles.

London Scottish went back on the offensive and were back in the game with minutes left on the clock as Stevenson dotted down in the corner after attacking the blindside of a scrum leaving the Exiles seven points adrift of Cov.

The hosts could not deal with Stevenson as the winger once again found a gap to grab the visitors’ fourth try but unfortunately, the conversion was missed giving Coventry the victory.

Ealing made it six bonus-point victories in a row as they saw off local rivals Richmond in a thrilling affair.

The victory moves Ealing up into top spot of the Greene King IPA Championship, two points ahead of London Irish.

In a weekend full of comebacks, this game was no different. Richmond attempted to fight back from 21-0 down for an historic derby day victory, but ultimately, fell short.

Ealing were relentless in attack, scoring three tries in the first quarter to establish a 21-point lead. Rayn Smid, James Cordy-Redden and Seb Stegmann were the scorers as the Trailfinders carved through the Richmond defence at will.

Richmond hit back when Rob Kirby ran a smart supporting line to squeeze through a gap in the Ealing defence. The visitors looked to have found their fight as William Goodrick-Clarke went over for a second converted try only for Ealing to respond with two tries of their own through Alun Walker and a second from Stegmann.

A third Richmond try made it 31-19 at the break as Jordan Simpson-Hefft bulldozed his way over for the score.

Ealing made use of a man advantage to grab the first points of the second-half. Goodrick-Clarke was shown the yellow card and Craig Willis sent ‘Mond defenders back to the changing rooms with a delightful step inside to go in under the posts.

Richmond, once again, came back into the game and added two tries and a penalty. Timmy Walford and Chris Davies were the try scorers whilst Kirby notched the three-points. Unfortunately, for the visitors, Ealing remained strong for much of the second half, conceding just these 13 points as they clinched the win to go to the top of the table.

Jersey Reds finally put an end to the bonus-point machine that is Cornish Pirates.

The Pirates travelled to Jersey having earnt a try-bonus point in all six of their games, but any hopes of continuing this record were quickly put to bed as the Reds controlled proceedings, almost shutting the Pirates out completely.

Jersey were outstanding throughout. Three tries from James Newey, Charlie Maddison and Koch Marx were supported by a flawless kicking performance from Aaron Penberthy who slotted 18-points on the day.

The first-half was all Jersey. Newey broke through the Pirates defensive line for the first converted try of the afternoon before Maddison added another. Kirby slotted his first penalty to build up a 17-0 lead.

The Pirates finally got on the scoreboard at the end of the half as Will Cargill dispatched a penalty of his own.

It was a much more even second-half but the score line didn’t get any better for the Pirates. Penberthy added two more penalties and a drop goal to increase the Reds’ lead to 26-3. It took the Pirates 74 minutes to get their first try with Sam Matavesi the scorer.

Jersey extended their lead further when Marx went over from close range to round off a dominant performance for the hosts.

London Irish put Yorkshire Carnegie to the sword with a 12-try demolition.

The Exiles have now won all six of their games so far this season and have moved into 2nd place, just two points behind Ealing Trailfinders.

It was an incredible team performance throughout from Irish with no less than eight different scorers. There was also an individual achievement for Topsy Ojo. The veteran winger made his 290th appearance for Irish – equalling David Plaice’s record – and he picked up a try to mark the occasion.

There was never any doubt for Irish as they dominated throughout. Ben Meehan grabbed the first of the afternoon after just eight minutes as he finished off an excellent break from scrum-half Ben McKibbin.

From there it was plain sailing for Irish. They were awarded a penalty try shortly after when Carnegie illegally stopped a driving lineout five metres out and Will Britton was yellow-carded for his part.

Despite the man advantage, Irish had to wait for their third and it came via Tom Parton after Britton’s return to the pitch. Debutant Motu Matu’u got in on the action just after the half hour mark as touched down at the back of a powerful rolling maul to secure the thoroughly deserved try bonus-point.

The Irish forwards continued to show their power and were once again over the whitewash as Ollie Hoskins grabbed his first of three tries on his 50th London Irish outing just before the break.

There was no slowing down for the Exiles after the restart as they added a further seven tries. Parton and Hoskins both grabbed their second scores of the afternoon to get the ball rolling.

A try from Barney Maddison on the hour mark made it an incredible 50-0 to London Irish with Carnegie unable to defend against the rampant home side.

Topsy Ojo marked his occasion with a score after racing down the touchline, buoyed on by a jubilant home crowd.

Fergus Mulchrone finished off a slick move in the corner before two tries in a minute from Saia Fainga’a and Hoskins, his third of the afternoon, ended the Exiles’ scoring on the day.

With no time remaining on the clock Yorkshire Carnegie finally put some points on the board. Scrum-half JB Bruzullier darted through the Irish defence on a one-man mission to at least give the visitors something to show on an otherwise horrendous day.

Nottingham rounded off the weekend with a dominant performance over Hartpury College.

The Green & Whites stormed to victory with tries from Jack Spittle, Sean Scanlon and Jordan Coghlan plus 11 points from the boot of Shane O’Leary.

Nottingham controlled the game throughout with Spittle being a key part of this. The winger was given plenty of space to score the first try before setting up Scanlon for the second.

Two penalties from O’Leary gave the Green & Whites an 18-0 advantage at the half and they would not relinquish the lead for the rest of this contest.

O’Leary added his third penalty of the game shortly after the restart to make it 21-0.

Hartpury were finally able to assert themselves into the game just before the hour mark. The visitors benefited from a man advantage as prop forward Rory Burke was sent to the bin as Hartpury scored their lone try of the afternoon through Rob Langley.

The comeback never really looked like it was on for Hartpury and the result was confirmed when Coghlan touched down with minutes remaining.

Round Eight kicks off on Friday night as Yorkshire Carnegie host London Scottish with both sides aiming to bounce back from losses.

The only fixture on Sunday sees Cornish Pirates face Bedford, with the home side keen to respond after their second defeat of the campaign.