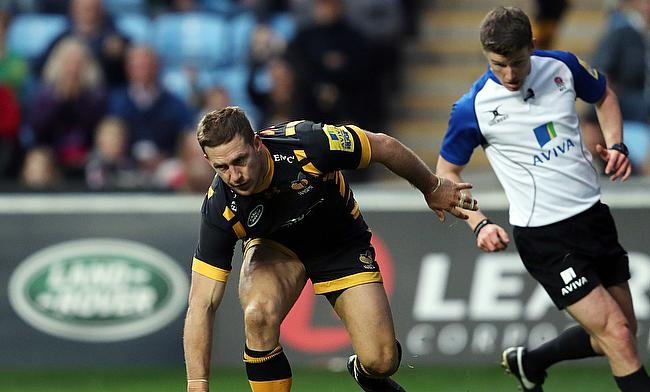 Wasps' Jimmy Gopperth finished the game with 21 points to his name.
©PA

Fly-half Jimmy Gopperth continued his good run and contributed with 21 points as Wasps defeated Newcastle Falcons by 31-6 in their Aviva Premiership match at Ricoh Arena on Sunday.

Wasps' injury woes continued as prop Marty Moore left the field in the ninth minute with a neck injury.

Wing Frank Halai's try and a penalty try followed by Gopperth's penalty and a double conversion helped Dai Young's side to 17 points at the end of the first half. Fly-half Mike Delany provided some respite for Newcastle Falcons at the stroke of the half time to reduce the gap to 14 points.

With a 50th minute penalty Deanly kept down the difference to 11 points but it was all Gopperth's show from there on as he added two converted tries to secure the bonus-point victory for Wasps.

The win allowed Wasps to retain the second position while Newcastle Falcons are at the ninth place in the Aviva Premiership table.

Young believes Wasps was lucky to secure a bonus-point win and urged the team to show more intent in the upcoming games.

"It was a bit of a tired and flat performance and the scoreline flattered us. We didn't show much control today and were fortunate to get a bonus-point win.

"We've had a lot of big games lately and some of our players badly need next week off to recharge their batteries.

"He (Marty Moore) experienced neck pain and has gone to hospital. There are no symptoms in his arms and legs and one can't be too careful in these situations, but hopefully there is no real damage."

"It was another questionable TMO decision - I spoke to Simon at half-time and he said that he just went for the tackle, and therefore it's a little bit disappointing.

"The scoreline doesn't reflect the effort we put in as our defence was outstanding to make it a difficult game for them.

"We created as many chances as they did but we didn't take them, and a little bit more accuracy would have made a big difference."