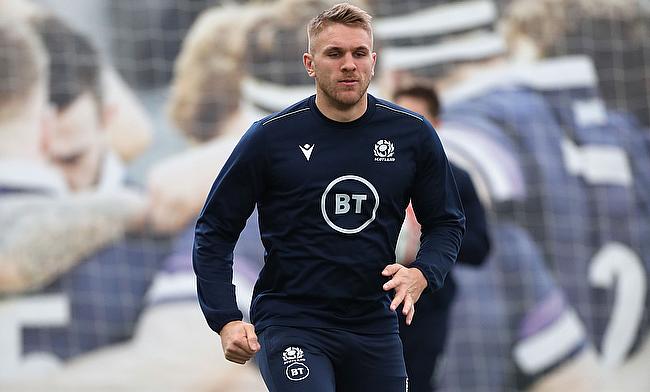 When any rugby career moves quickly, it can be hard to take it all in, but rather than rest on his laurels, Chris Harris made a bold decision last summer.

Having penned a new deal with Newcastle Falcons in February 2019 and made over 100 appearances for them, he could easily have stayed at Kingston Park to help Dean Richards’ side regain their Gallagher Premiership place following relegation from English rugby’s top tier.

However, he knew playing in the Greene King IPA Championship would harm his chances of earning more Scotland caps, so he made the move to Gloucester.

Fast forward to March 2020, with the centre now has 18 international caps under his belt, and he definitely feels that relocating to Kingsholm was the right choice for his career.

“I think moving to Gloucester has freshened everything up for me from a playing point of view,” Harris, who is expected to play for Scotland in Wales in the Six Nations this weekend, told TRU this week in Edinburgh.

It’s been a busy day on the Six Nations front with the news that Alex Craig and Chris Harris have been named in Scotland’s squad while Louis Rees-Zammit and Owen Williams have been named by Wales.

“I’m getting a lot of help down there from different coaches and different players and that has really helped the attacking side of my game.

“I’m pretty confident with my defence, I am confident with my attack, but it has just always been a bit of a ‘work on’. When I get the ball, I just have to back myself and go with it. I’m getting a few more touches of the ball with club and country now which always helps.

“I don’t think you can get comfortable. I think at Newcastle I was comfortable, and I probably would have just ended up plateauing [if he had stayed there].

“Going somewhere else freshens you up and gives you a little spark. I think if I had stayed at Newcastle, playing in the Championship, I wouldn’t have been sat here in a Scotland camp, so I think it was a good move for my career.

“I’m more mentally comfortable, that’s a big side of the game I’ve had to work on”

When Harris made his Scotland debut in November 2017 against Samoa, it is fair to say that not too many people north of the border knew too much about the Carlisle-born player.

His next cap, a Six Nations baptism of fire in Cardiff in February 2018 which resulted in a 34-7 loss, could have really hurt lesser characters.

Harris knows that the Test arena is a hard school and he feels in the last two years he has learnt a lot about himself.

“I would never say that I am comfortable [at the highest level], but I think I’m a bit more mentally comfortable,” Harris said. “That’s a big side of the game I’ve had to work on and that’s been the biggest step.

“I think I’ve always had the ability to play at this level, it has just taken me a couple of goes to get it right.

“It’s not hidden that the mental side of the game is a massive thing. It is not a surprise that it plays a big factor, it is just something you have to put to one side and focus on each game as it comes. You have to play the game, not the occasion.

“I’ve never doubted myself - it is just a big stage, international, it is another step up. It was the same when I was playing club rugby and I moved to Tynedale, it was another step up. You’ve got to be pretty mentally strong to play at any level.

“I’m just enjoying my rugby right now and I think I’m putting in some decent performances for Scotland.”

The wins over Italy and France in recent weeks have seen the atmosphere change around the Scotland camp and they are keen to put a marker down for the rest of 2020.

“I think our defence is the best in the championship at the moment, that just proves where we've come,” Harris said.

“We are improving and the exciting thing is that there is so much more to give as we continue to get better.

“It is just about buying into it [what defence coach Steve Tandy wants to do]. With the help of a few players, a few more experienced guys, that is what has made it work. The key is just buying in and everyone has done that.

“There is a lot at stake for us in Cardiff, but a lot of pressure on Wales to put in a performance.

“My first international start was down there in Cardiff. It is definitely the loudest crowd, especially with the roof shut. I don't have a lot of experience playing there, but every player I have spoken to says it is the most exciting place to play.”