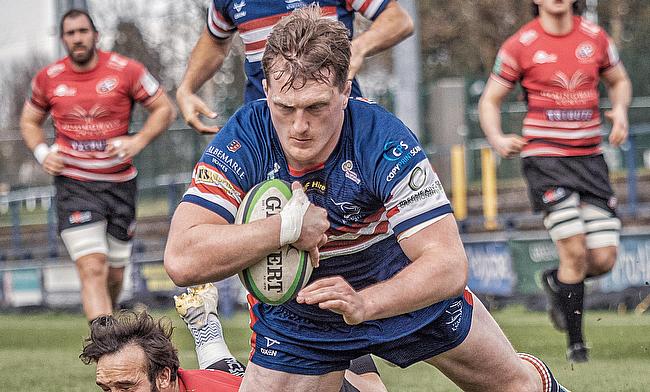 Round 4 is in the bank and with it the initial portion of the campaign ahead of the first fallow week of the GK IPA Championship season.

The weekend's action brought the usual thrills and spills with a mixture of ding-dong battles as well as some lopsided affairs.

The table has now started to take serious shape with teams jostling for position as things continue to ramp up ahead of the run-in.

Doncaster eventually came out on top against the Pirates in a match-up between two previously unbeaten sides and it didn’t fail to live up to its billing as the clash of the weekend, with TRU in attendance at Castle Park.

The first half was somewhat of a scrappy affair, with both teams struggling at the set-piece as well as falling foul of the officials on numerous occasions.

An opening sequence that saw a knock-on from the kick-off followed by a penalty at scrum time and then an overthrown lineout eventually ended with Josh Caulfield being sent to the bin for the visitors for a tip tackle, all within a two-minute window.

Donny made use of their man advantage five minutes later when John Kelly burst out of a maul to gallop in unopposed from the 22 - the first of two absolutely key involvements the flanker would have on proceedings. Sam Olver added the extras from the tee and the Knights had a 7-0 advantage after as many minutes, though that margin proved to be short-lived.

Both sides benefitted from one another’s ill-discipline and Pirates won a five-metre lineout after another Doncaster infringement. Several phases later, they sent Tom Duncan in out wide and despite Cargill’s conversion missing the target, it was game on.

Momentum then swung the Pirates’ way for a sustained period, but it took them several golden opportunities to capitalise.

A lovely John Stevens break brought them close but the Knights line held firm, though somewhat illegally. Jerry Sexton was sent to the bin for the home side in all the chaos and despite again being penalised on their own catch and drive, the Pirates eventually got it right.

Guido Volpi pulled a maul down as it rumbled towards the line to join Sexton in the bin and with a penalty try signalled, the Pirates were in the lead with a two-man advantage.

Doncaster's first win over Pirates since 2016.

That's all from Castle Park, it's been a privilege!

Keep an eye out on Monday for a match report with my full Round 4 Review on @TalkRugbyUnion.

Rugby Ey !? Until next time.

Doncaster somehow held out through the absence of Sexton and Volpi, crucially forcing a turnover on their line, before having the better of the chances once back to a full compliment.

The Doncaster momentum continued into the second period, but their ambition to go for the corner rather than opting for a simple shot at goal was to be punished by the Pirates as Cargill extended their lead from the tee.

However, the Knights closed the gap to a single point on the hour mark, making gains deep into Pirates territory when Olver intercepted on halfway.

Several penalties and a few minutes later, James Mitchell found Connor Edwards who ran a superb line to crash over from a few metres out. Olver added the extras to make it a seven pointer.

Play settled as the game crept towards the final 10 minutes as Volpi atoned for his earlier antics by winning a turnover as Pirates hammered the Doncaster line.

Doncaster bounced back and made their way upfield, giving Olver the chance to regain the lead for his side with a simple penalty in the middle of the 22, which he duly converted.

Almost immediately, Pirates had a shot of their own from the tee, but Cargill’s kick stayed right and sailed wide on this occasion.

They had one final chance to snatch a win with the clock in the red as Alex O’Meara made a scintillating break before finding his wing partner Maliq Holden to take play to the Doncaster 22.

Kelly then came up with a monumental jackal a few rucks later, winning the Knights a penalty which they duly tapped and booted into touch to extend their 100 per record, leaving Pirates with an extra-long bus trip home.

Visiting Jersey finally put their travel troubles behind them, capitalising on Bedford’s ill-discipline to gain a deserved first win of the season and a timely boost for the weeks ahead.

Jersey were on the board first when Brendan Cope kicked an early penalty, following several infringements both ways in the opening exchanges.

Their lead was into double figures in the second quarter when Jack MacFarlane scored from a Reds maul shortly after Joe Wrafter had become the first Blue sent to the bin.

That set off a chain reaction which saw a frantic period of scoring from both sides heading into the interval.

Bedford pulled level when Tommy Matthews kicked a penalty of his own before converting Ryan Olowofela’s effort from the restart. Rich Lane then added a second try for the hosts to take them into the lead for the first time.

There was still time in the final minutes of the half for MacFarlane to repeat his earlier trick and Cope to add another five points from the tee for a 20-17 Jersey advantage at the break.

The second half saw an air of calm brought to the scoreboard but no shortage of drama. Bedford were at one point playing with 12 men after both their tight heads - Ed Prowse and Rob Hardwick - were in the bin meaning they had to drop a player, causing much confusion and a period of uncontested scrums.

It took until the final 10 minutes for the tie to be settled when Bath loanee Darren Atkins burst over for the Islanders to give them an eight-point cushion.

Bedford managed to at least gain a losing bonus point for their troubles, with Will Maisey kicking a penalty in the final play, leaving Jersey as 25-20 victors.

Coventry eventually came away from Lady Bay with a handsome win, but the contest was anything but plain sailing thanks to a thrilling Nottingham fightback.

Floodlight issues caused a 15-minute delay to proceedings before a frantic opening where the hosts looked the most likely to break the deadlock.

This, of course, meant that Coventry scored first inside a quarter of an hour before they raced into a 21-0 lead.

Senitiki Nayolo went over for the opener as he broke off the back of a maul before adding his and Cov’s second when he dotted down on the half-hour mark. Nottingham’s woes were accelerated when Jordan Coghlan was yellow-carded on the stroke of half-time, leaving Jordan Poole to add further gloss to the visitors lead with a debut try.

The margin was increased further when Tony Fenner added three more points from the tee in the first few minutes of the second half, after which Coventry’s stranglehold on proceedings was finally interrupted by a period of Nottingham scoring.

You know when you arrive at a new club you want to make a decent impact? Welcome to Cov, @jpooley123!

Harry Graham dragged the Green and Whites back into the contest with a pair of tries in as many minutes, combining alertness and pure skill for a handy brace. Michael Stronge added a conversion and just like that, the deficit was halved.

Poole secured the bonus point try for Cov within the hour, but Luke Frost then hit back just 10 minutes later with a score of his own.

Nottingham put themselves back within touching distance as time ticked away, securing their own try bonus point through Harri O’Connor, which put them 29-24 behind with a couple of minutes to play.

Still, there was time for a final score and it was decisive from Coventry as James Martin benefitted from some fine work from Ryan Burrows to touch down. Kieran Wilkinson added the extras to put the seal on a breathless Coventry win.

Sunday’s action saw Saracens make the short trip to Richmond for a first league encounter between the sides in over 20 years.

Sarries eventually came away with a telling bonus-point win, but the hosts made them work hard for it, holding them scoreless for almost half an hour.

Richmond had in fact taken an early lead, Ted Landray kicking over a penalty after some sustained pressure in what was their best period of the game.

Ears pricked up across the country once again when it remained 3-0 for the next 20 minutes, but the visitors were eventually able to break through the staunch Richmond defence at regular intervals.

Manu Vunipola pulled them level from the tee before Sarries were finally able to get over the whitewash twice through their rolling maul, first via the returning Jamie George and then through Callum Hunter-Hill to open up a 15-3 half-time lead.

Rotimi Segun added a third soon into the second half as Saracens searched for the bonus point. A lean period followed despite Alex Bibic becoming the second ‘Mond player sent to the naughty step before Andy Christie eventually scored Sarries’ all-important fourth in the final quarter.

Further gloss was added late on with Ralph Adams-Hale bundling over and Vunipola’s only successful conversion of the half took the final scoreline out to 32-3 in favour of Sarries.

There is a lack of remaining superlatives to describe how dominant Ealing have been through the first month of the season and they outdid even themselves here, racking up 11 tries for their fourth successive bonus-point win.

Hartpury gave them a real game in the first half, but as with last week, Ealing proved too strong and completely raced away in the second period.

Ealing were 14-0 up inside the opening 10 minutes thanks to a pair of efforts that started in their own half from James Cordy-Redden and Max Bodilly.

Kieran Murphy added a third before Hartpury started to work their way into the game.

Josh Bragman hit back with an intercept of his own and when Will Partington touched down, they were back within seven as half-time approached.

However, that was as close as the visitors got, as Simon Uzokwe crashed over under the posts for Ealing’s bonus point try and a 28-14 half-time lead.

If the first period was a nearly level crossing, then the second provided near exclusive one-way traffic in favour of the West Londoners.

Craig Willis continued to pile the points on from the tee before Steven Shingler assumed kicking duties and Ealing had hammered home 47 unanswered points by the time Robbie Smith scored what was barely a consolation for Hartpury.

There was still time for Ealing to have the final say and extinguish any hopes of Hartpury managing a bonus-point score as Bodilly intercepted to double up his own tally to seal a mammoth 75-19 Ealing win.