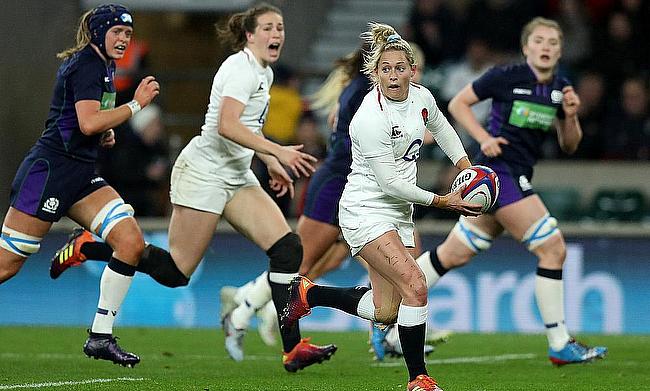 Charlie Beckett Column: What rugby can learn from The Hundred
Poppy Cleall Exclusive: “The people I'm playing with are who I play for”
Exclusive: Harlequins Fly-Half Ellie Green Ahead of Allianz Premier 15s Final Encounter With Saracens
Appleby hoping for bright future at Gloucester-Hartpury

The atmosphere in the conference room at the Loughborough University Stadium is vibrant. Coaches and players from the top universities in the country have gathered for a media day to launch the new season and the smiles on their faces say it all.

From Edinburgh to Exeter, they all share the same enthusiasm after 18 months without rugby at this level, but for Hartpury Women’s coach Natasha Hunt, she immediately radiates that excitement.

“I think everyone is buzzing,” Hunt says as she takes a seat in the stands overlooking Loughborough’s immaculate 4G football pitch.

“It was devastating for the girls that they weren’t able to play at all last year. Trying to keep the motivation was tough at times, but they have come through it unbelievably and the excitement levels are really starting to rise now. Hopefully when it comes to October 6th, we’ll be flying.”

Hunt has been working as a coach within the university set up for just under three years whilst combining her commitments with Gloucester-Hartpury in the Allianz Premier 15s, but just a couple of weeks prior to our interview, the scrum-half had returned home from her second Olympic Games.

Great Britain's men and women both agonisingly missed out on a medal in Japan but despite severe funding constraints in the lead up to Tokyo 2020, even being in contention for a bronze has to be seen as an achievement in itself.

Unsurprisingly, Hunt admits how “gutted” she and her teammates were not to get over the line at the beginning of last month, but the 32-year-old was quickly back into the swing of things with the Premier 15s season returning this weekend.

“You know, it hurt not coming away from the Olympics without a medal because we came as close as we did, but I have had time to reflect,” Hunt says.

“I had my mandatory downtime, but it was a breath of fresh air coming back into training with the girls. I love my team! I think I get mocked quite a lot by the other girls about how much I am Gloucester-Hartpury through and through, but when you are part of a team, when you are genuinely smiling on the way to training and you enjoy what you do, it is intense, it is hard work, but you love every second of it.

“It means the world and that is why I am so passionate about the club because I genuinely love everyone involved.”

Gloucester-Hartpury finished last season in fifth place and the club continues to build under Sean Lynn, which has filtered down into Hunt’s role within the university.

“Lynny [former coach of Hartpury University's Men's side] said there was potentially an opportunity to move into coaching and it is everything I kind of wanted,” Hunt explains.

“I have always been so passionate about growing the game and helping grassroots and helping people get to their aspirations so to be able to be in a position where at Hartpury, where we have got so many girls that have aspirations to go on and play either Premier 15s rugby or international rugby, is really something which is quite close to my heart. I am really fortunate to be in this place and I am very excited about what the future holds.”

With four of their players named in @EnglandRugby Women's EPS squad at the start of the month and with international recognition growing, Gloucester-Hartpury head coach Susie Appleby is predicting a bright future right across the club. #Premier15shttps://t.co/QtodpBN8fq pic.twitter.com/hJmsxuNUJz

With the introduction of the BUCS National League, the women’s university game is growing and the pathway which Gloucester-Hartpury are providing to their players has been evident over the last few years.

Kelly Smith, Tatyana Heard and Zoe Aldcroft have all donned the red and black of Hartpury in recent times before representing England, but across university rugby, more opportunities are appearing for girls who want to progress in the sport.

“I think we see it across the board,” Hunt adds. “Every time we play, the standard just gets better and better. It is going to be really interesting to see how many girls are actually really putting their hands up and how many will play across the Premier 15s as well because everyone is at that standard now.

“I can only talk for ourselves because I know that pathway, but we have got girls from 16 years old all the way up to a Premier 15s club. Not only that, we have got links with Cheltenham Tigers who are a Championship club so it gives people more of a chance to be on that pathway and to be picked up, played and pushed in the right direction. I think that is crucial in growing the game.

“If you can’t be seen, how are you ever going to get played? Knowing that pathway, knowing the girls who are in it and also knowing the links and where we can push people to try and get the best out of everyone is so important.”

With the BUCS National League season not kicking off until the beginning of October, Hunt thinks her university players might be relieved the England international is turning her attention back to the Allianz Premier 15s: “I think they are a bit bored of me! I have been sending them emails because I want them in straight away!”

With Gloucester-Hartpury being a close-knit group, everyone involved in the set-up will be cheering Hunt and the side on when they open their new campaign up against DMP Durham Sharks (another Premier 15s side with strong university connections) on Saturday.

With Harlequins dethroning Saracens last term in a pulsating season - mixed in with star names such as Ellie Killdunne (Harlequins), Bryony Cleall (Wasps) and Leanne Riley (Bristol Bears) all moving clubs - Hunt expects the level of competition to rise once again.

Here is you Gloucester-Hartpury 2?3? ready to take the field in Round 1 of the @Premier15s ??

The circus is back! ?? pic.twitter.com/cLgeh20NAi

“You have seen a lot of big names moving across the clubs which makes the league a bit more unpredictable which is exciting because you don’t know what to expect in a strange sort of way,” Hunt says. “Has it become more of an even playing field? I don’t know, but given what we saw last season, I am looking forward to that competitiveness again.

“I think challenging for those top four places is the aim every time, but it is a realistic one for us. We have got eyes on the prize and we have been talking about it already. We kind of let ourselves down last year.

“We were mixing it up with some of the big guns in a lot of our games and we were leading at half-time in pretty much most of the games but it is just that sustainability and being able to get over the line at the end.

“That is something we have been really focused on. For us as a squad, we have only lost three girls which says volumes and we haven’t lost any big names. None of our girls who are England internationals or Welsh internationals or aspiring internationals have gone anywhere because they can see what we are building at the club.