George Skivington: "It's about working on what will drive Gloucester forward" 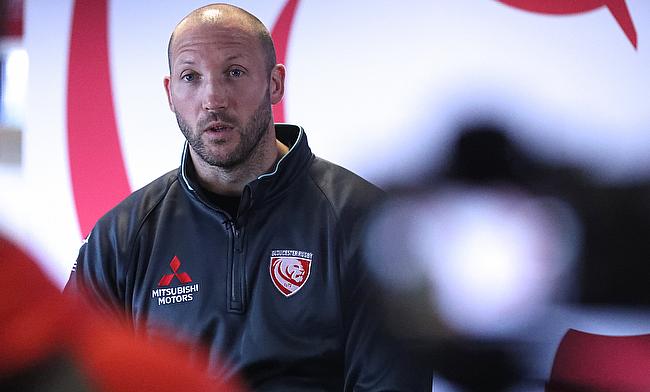 When the Gallagher Premiership resumes next Friday evening, it will almost feel like the start of a new season. It has been just under six months since the full-time whistle blew at Ashton Gate following Bristol Bears’ 28-15 victory over Harlequins, but now the top-flight is only days away from returning.

The coronavirus crisis has undoubtedly hit the sport hard but whilst the Premiership are ready to resume the 2019-20 campaign, the reality is a lot has changed. A whole host of new signings will be let loose in the final nine rounds of domestic fixtures whilst over at Gloucester, you can argue their exodus during the enforced break was the most startling.

Johan Ackermann’s time in the West Country came to an early end after accepting a role at Japanese Top League side NTT DoCoMo Red Hurricanes whilst Director of Rugby David Humphreys concluded his six-year spell in charge of Gloucester.

The likes of World Cup winner Franco Mostert as well as Callum Braley and Owen Williams, also departed and Gloucester were seemingly a portrait of a club trying to stitch together a coaching team and a playing group ahead of the Premiership’s return.

Part of that process was appointing George Skivington as their new head coach. The 37-year-old is the youngest boss in the top-flight after leaving his assistant’s post at London Irish to join Gloucester at the end of June. His move did add to the club’s challenges, though, as Irish have made a complaint to the Premiership relating to contacting personnel who is under contract at another club.

The mediation process is ongoing around Skivington’s exit and whilst he did refuse to comment on the subject on Tuesday, his thoughts around Gloucester did give an indication that the club are slowly recovering from a problematic time.

The backroom staff which Skivington has assembled is testament to that as he has brought in the likes of Alex King and Dom Waldouck. The trio all experienced success at Wasps during their playing days and Gloucester’s new head coach believes his additions and changes will help drive the club forward.

“There is a good link with the coaches and I think we have got a good balance,” said Skivington. “We played together, we have got respect for each other, but I think what is key to that is that we will all be happy to call each other out and obviously we had lots of long discussions about how does a coaching dynamic work and I think trust is paramount to that.

“Also, I think it is key that you are not all going to nod along and agree on the same thing. We did play together and we have got history together, but we are also varying ages. Between Kingy, Dom, myself, Trevor [Woodman], we all varying ages, have all been to different places and have all got massively different experiences, but I think it is not about trying to bring back the magic of Wasps or anything like that. It is about trying to create Gloucester Rugby the way we think it can be most successful.”

Since Skivington arrived, he has solely been in charge of the rugby side of things whilst Alex Brown [Commercial Director] and Lance Bradley [Chief Executive Officer] have focused on the financial aspects of the club.

And two players which Skivington is looking forward to working with further are Jonny May and Danny Cipriani. The latter was a former teammate of Skivington’s during his time at Wasps whilst May is returning to Gloucester after moving to Leicester Tigers from Kingsholm in 2017.

Cipriani’s magic certainly helped Gloucester reach the Premiership play-offs last season and whilst Skivington acknowledges the ability of his fly-half, he admitted his selections are not set in stone.

“I have talked to Danny and no-one is guaranteed to play and we are certainly not building a rugby club around anyone in particular,” Skivington added. “We are building Gloucester the way we think Gloucester can play.

“We have got a few players like Danny who do have something special to offer and I think it is important they buy into what we are trying to do and deliver the best version of themselves. If they do that, then we are all happy.

“Danny’s obviously had highs and lows and I think from his point of view, he just wants Gloucester to be a success and he wants to be a part of that and if we get it right, he can be.

This is the most exciting announcement of a head coach I’ve seen in rugby, foreword thinking. The type of man you build a club around. Very grateful I’ll get to play out my last years under him ?? https://t.co/I9Y2vOxC3Q

“Jonny is an exciting signing, he started here and now he has come full circle,” Skivington continued.

“He is a very impressive bloke and athlete when you watch him train. He is clearly a very focused and driven individual. If Danny and Jonny - and there are plenty of other names to throw into that hat - all get firing and get it right - they could do some really exciting stuff, but it’s not going to happen straight away."

Following Skivington’s move to Gloucester, chief executive officer Lance Bradley revealed the playing group did have an input when it came to appointing a new head coach.

In an interview last month, Bradley said the squad “preferred George” when asked for their thoughts on possible candidates, but whilst Skivington was pleased to hear his players had potentially favoured him, the 37-year-old is aware the hard work begins now.

He told TRU: “Whatever the process was of bringing me in, I am obviously very grateful to Lance and Alex and everyone for backing me. If there was a conversation with a few players and they thought it was a good decision, then obviously that is great but that is up to me to prove them right and earn the respect off them. It is great, but it is like anything; if I don’t come in and keep my standards extremely high, then it doesn’t count for much.”

The ‘standards’ which Gloucester set themselves last year would have excited the Cherry and Whites faithful. A top four finish for the first time since 2011 gave them a platform to build upon, but a dip in form this term means the Kingsholm outfit will resume the Premiership season in ninth place.

Gloucester also lost their last four matches before lockdown and with a trip to Worcester Warriors to come next Saturday, Skivington admitted the club are not aiming for any specific goals in the remainder of the campaign.

“We haven’t set any targets because I don’t feel there is any point setting any targets at this moment in time,” he said. “We have changed a lot, guys coming in, guys coming out. We have effectively had a fortnight together as a team to train. I think for me the real result is about working out who’s who and the characters that will drive the team forward in the future. That is all of us, not just on the field, but the whole club.”