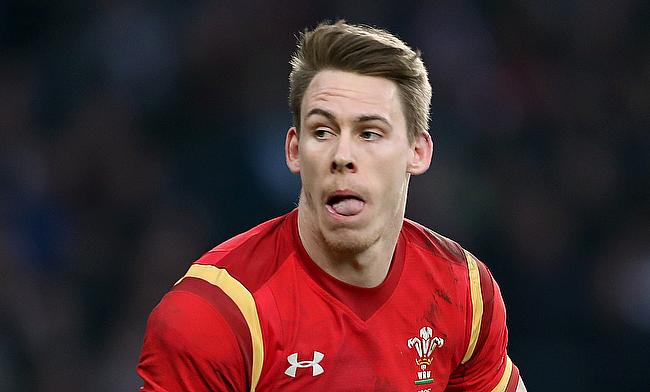 Liam Williams was one of the try-scorer for Wales
©PA

Wales managed to hold off a 14-man Scotland side as they sealed a thrilling 25-24 win in the second round of the Six Nations tournament at Murrayfield Stadium on Saturday.

Scotland had a 17-8 lead in the opening half but a red-card to Zander Fagerson in the 54th minute hampered their momentum as Louis Rees-Zammit's second in the 70th minute proved just enough for Wales as they moved to the top of the table with their second win from as many games. Scotland, who started their campaign with a win over England are now at fourth place.

Wales looked threatening at the start as they won a couple of line outs in the opening five minutes before they got their first points through a penalty kick from Leigh Halfpenny in the 8th minute after Chris Harris was adjudged off side.

The response from Scotland came immediately with a three-pointer from Finn Russell in the 10th minute after Alun Wyn Jones was penalised for not rolling away. Scotland had to deal with an injury blow in the 12th minute with Blade Thomson leaving for a Head Injury Assessment and was replaced by Gary Graham.

As the first quarter was about to end, Scotland got their opening try when Ali Price chipped over the defence of Wales allowing Garcy Graham to dot down and Russell kicked the conversion making it 10-3. The Dark Blues increased their lead further when Stuart Hogg gathered his own kick following a scrum and brushed away a tackle from Halfpenny on his way to his side's second try and with Russell improving the scoreline became 17-3.

The 33rd minute saw Halfpenny leaving the field for a HIA and shortly they reduced their arrears to nine points when Dan Biggar fed Nick Tompkins, who passed to Liam Williams with eventually Rees-Zammit getting his first try in the 38th minute but the conversion went wide.

Wales looked dominate in the second half and they got their breakthrough when a perfect from Rees-Zammit sent Liam Williams over the line and Callum Sheedy's conversion reduced the gap down to two points. Their momentum took a further boost when Fagerson was sent-off in the 54th minute as his shoulder came in contact with the head of Wyn Jones.

The advantage of having an additional player proved dividends immediately as Wyn Jones crossed the whitewash after a powerful Welsh maul making the scoreline 17-20.

Scotland were relentless despite their numerical disadvantage with skipper Hogg leading from the front for his second try in the 65th minute and Russell's conversion took them to a 24-20 lead before Rees-Zammit's second handed them a heartbreak with Wales completing a one-point victory.