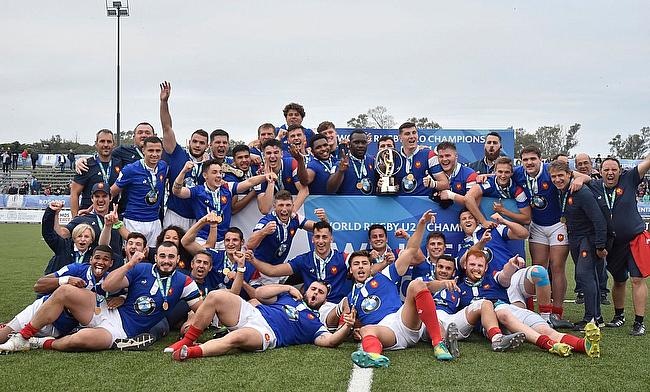 Carbonel, Joseph steer France to 7-20 win over South Africa to set up final against Australia
Australia beat Argentina 13-34 despite McDonald's red-card to reach final of World Rugby U20 Championship
Argentina U20 reach semi-final with 26-47 win over France

France have successfully defended their World Rugby U20 Championship title as they edged out Australia 23-24 in the final at Racecourse Stadium on Saturday.

This is also France's second title win after they won the 2018 edition while Australia were denied their maiden title win.

Australia got off to a fabulous start as they scored the second fastest try in the tournament through Mark Nawaqanitawase. France was quick to respond with Theo Lachaud going past a couple of defenders to touchdown in the 7th minute and Louis Carbonel followed with a conversion and a penalty goal to give France lead.

The momentum once again swung towards Australia with Will Harrison opening his account with a 21st minute penalty goal and Lachlan Lonergan following with his fourth try in the tournament to make it 13-10 but their efforts were negated with Alex Burin's try and a penalty from Carbonel at the stroke of half-time.

Jordan Joseph, the player of the tournament, played a pivotal role in making an interception to send Harry Wilson over the line in the 48th minute to make the scoreline 20-18. As the game was heading for a tight finish Carbonel and Harrison traded penalties as Australia maintained their two point lead.

The decisive point though came from the boots of Carbonel in the 66th minute as his fourth penalty kick ensured France completed a thrilling one point win.

Australia captain Fraser McReight said: “The scoreboard shows how close the match was. It was back-and-forth and just point after point from each team. Credit to France, they played really well but I am super gutted for my team. We really lifted the tempo in the second half but unfortunately that wasn’t enough to get the job done.”

France captain Arthur Vincent said: “It is an unbelievable feeling, I am very, very happy and proud of this team. Thanks to all the team and the staff and the support we had.”