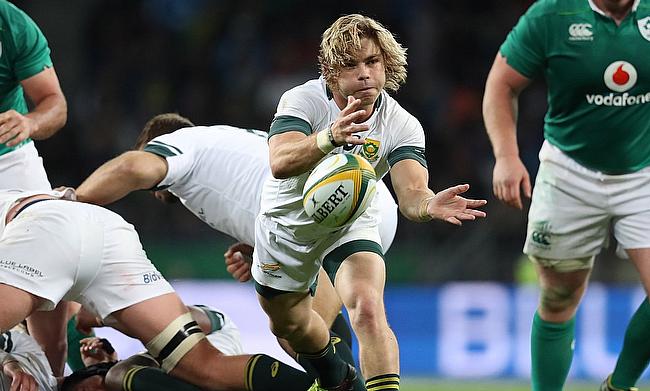 South Africa international Faf de Klerk expressed his desire to sign off from Super Rugby with a win in the final against Crusaders on Saturday in Johannesburg.

The 29-year-old, who will feature for Lions one final time on Saturday urged his team to go with a positive and attacking mindset just like they went against former champions Hurricanes during which they came from behind and registered 44-29 victory.

"In terms of how we approach them, we'll probably want to chase up the tempo. Get their lungs to work overtime," he said.

"They have a similar attacking mindset, but the Crusaders will probably kick more," he said.

De Klerk has been a constant member among the replacements with the Lions management preferring Ross Cronje over his Springboks team-mate but the scrum-half is prepared to remain flexible as per the situation.

"A lot of players have to go through it," he said about coming on as a substitute.

"For me the important thing is to have the same mindset, whether I start or come off the bench.

"If you are 10 points behind or 10 ahead, you have to decide whether your team needs more energy, or more calm. You just have to be in the game."

This will not just be the last game for de Klerk with the Lions as he has signed a three-year deal with English Premiership club Sale Sharks but also for the head coach Johan Ackermann, who will take in charge of Gloucester and the Johannesburg based club will be determined to put a strong show against the seven time champions.

"I'll definitely go out with the intention of enjoying my last game," de Klerk said.