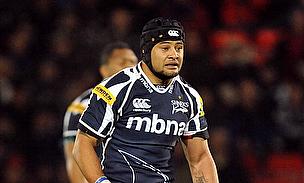 Sale Sharks will be treating their Aviva Premiership clash with Harlequins tomorrow (11th April) as if it is a Cup semi-final as they push for a play-off place.

Victory in the game for Sale would see them draw level with fourth-placed Bath and put a huge dent in Quins' own chances.

Having helped Sale on a run that has seen them lose just once in seven Premiership matches, centre Sam Tuitupou is in confident mood.

"I think it is a must-win game against Harlequins to give us a chance of making the top four," he said.

"It is a big game, and we are going to treat it like a semi-final. We hope to push on, as every win is important.

"At the start of the season our goal was top six, and anything above that is a bonus.

"At the moment we are in a good position to get top four, and we will just take each game as it comes and concentrate on winning our next game.

"We just need to keep doing what we are doing and keep in line and keep the pressure on, and that will give us every opportunity to win the game."

Domestic action is now the order of the day after both sides played Amlin Challenge Cup quarter-finals last weekend.

While Sale were beaten at home by Northampton, Quins beat Stade Francais in Paris to reach the semi-finals.

Quins director of rugby Conor O'Shea has reacted by naming the same team for Friday's match and Tuitupou says Sale have put their defeat behind them already.

"It would have been good to win the quarter-final and be in the hunt for both trophies, but we are looking to push for the top four and we just have to take it as it is now and concentrate on the top four," he added.

"I don't think the cup loss will have slowed momentum. The squad is full of confidence, the atmosphere is still here and the team is still buzzing."

Quins have not won away from home in the Premiership since beating Newcastle in December but they have won their last six matches against Sale.

Should they win Friday's clash, they would jump above Sale and into fifth place.

"The chat here is that every game is a cup final because we know we have to win every Premiership game left if we want to get into the play-offs," Quins lock Charlie Matthews said.

"We can take a lot of momentum from that (Stade Francais) game into the rest of the season.

"I think we got our Quins style back on the pitch in the way we played. It was as well as we have played for quite a while.

"We can take a lot of confidence from that and the way that we played, and hopefully moving forward we can repeat that for our remaining games, which are all must-wins."