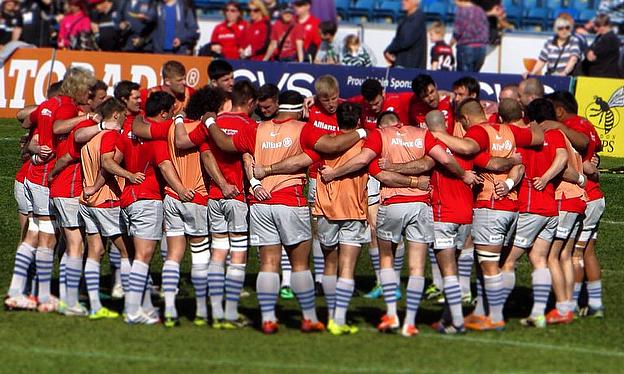 As every Aviva Premiership Round finishes you think that it cannot get any more dramatic but the next round arrives and proves that it absolutely can do!!

This weekend we witnessed more drama than a soap opera and more importantly witnessed a historical event... a Worcester Warriors win!! Yes you are reading that right... so let's review all of the action from Round 18…

On Friday Night, in typical fashion, Sale were in action once again, this time being hosted by Bath at the Rec. The drama unfolded before the starting whistle as the Sharks were stripped of two of their greatest assets due to warm up injuries; Dan Braid and Mark Cueto.

Bath should have been licking their lips in glee and should have started with a bang; however, the first half actually belonged to the visitors even without their star men. Tom Arscott shone at full back and their lineout king Mike Paterson continued his impressive form.

Bath’s intent was there, although, their execution wasn’t quite on the money and that meant that they lacked their usual penetration. In the second half we were ‘treated’ to nine(!) minutes of scrums and whilst Bath cried for a penalty try eventually a ‘normal’ one was scored by Ross Batty.

Sale stayed strong: they were resilient to the final whistle and held on for an empathic victory. It wasn’t George Ford’s night as he missed a couple of critical kicks and two drop goal attempts that would have sneaked it at the end. Sale continue to progress up the table whilst Bath need to re-group before the Premiership action resumes. Final Score Bath Rugby 11 – Sale Sharks 12

At Adams Park the London Wasps hosted Saracens and whilst the hosts worked themselves into the ground they were unable to take anything away from the match. It was always going to be a tough ask for Dai Young’s men; however, they really didn’t help themselves by conceding basic penalties throughout.

Saracens simply went through the motions and didn’t do anything too flashy – Charlie Hodgson and Owen Farrell both kept the scoreboard ticking and the Wolfpack asserted themselves as they always do. Wasps’ tries came from their two young wingers Jonah Holmes who returned from his loan at Leeds and Tom Howe who made his Premiership debut, neither looked out of their depth which will be pleasing for Dai Youngs given his injury situation out wide.

Andy Goode has had better days at the kicking tee, as he left points begging; though, all-in-all the Wasps Director Of Rugby was happier with his team’s performance.

As for Saracens, well, they got the job done; they weren’t perfect and they did switch off at times; however, a bonus point win after a week’s jolly that meant they trained only once is a case of a job done! Final Score London Wasps 20 – Saracens 32

As expected from an East Midlands Derby the match at Franklin’s Gardens sizzled from minute one until minute eighty and ended controversially. Leicester looked the more comfortable of the two teams throughout. Northampton never gave up and pressured right until the bitter end.

Leicester lost Matthew Tait to injury before the match started, but it was the Northampton Saints who suffered during the match with Dylan Hartley and Salesi Ma'afu both picking up injuries in the first half.

Leicester threw everything at Saints, including the kitchen sink, and although the Saints defence was monstrous it wasn’t impenetrable. Owen Williams showed his maturity as he took his first East Midlands Derby firmly in his stride; however, in contrast, young Will Hooley had a mixed day, despite defending well he missed critical kicks and let 8 points go begging.

For the Northampton Saints Kahn Fotuali'I and Ben Foden both showed their international class throughout. Ultimately, though, the day belonged to Leicester Tigers who were led from the front by their captain Ed Slater. Slater has already grown into his new role as Captain and continues his impressive unbeaten run wearing that captain's armband. Final Score Northampton Saints 16 Leicester Tigers 22

At Sandy Park it was a physical encounter between two teams that were desperate to get one up on the other, it was an open game in the Devonian sunshine that ended in dramatic fashion when Gareth Steenson missed the kick that would have snatched the match for his side.

In the first half Exeter had a lot of the ball and threw it about nicely with Tom Johnson and Luke Arscott making breaks and playing the type of rugby that the Sandy Park crowd love to see; however, Gloucester worked hard in defence and didn’t let the game slip away from them.

The Cherry and Whites’ hard work was rewarded after the break in the form of a Charlie Sharples try and Rob Cook’s steady boot. Gloucester pressed on but ultimately the two yellow cards to Sila Puafisi and Sione Kalamafoni gave Exeter the space to cross at the death; although, as mentioned, Gareth Steenson didn’t add the extras.

Unsurprisingly, Nigel Davies was the happier of the Directors after the game, crediting his side's endeavour and hailing the win as a ‘pretty significant’ one. Rob Baxter was harsher in his assessment of his men as their up and down season continues; “I am not going to hide my disappointment because I don't think that we played particularly well. I said to the guys afterwards that if you want to win Premiership games you have to go out there and play really well.” Final Score Exeter Chiefs 13 – Gloucester Rugby 14

In South West London there was yet another local derby and the main story at The Stoop was the return of Harlequins' England Internationals – Danny Care, Mike Brown, Joe Marler and Chris Robshaw, all of whom have been sorely missed over the past few months and all needed big games to make up for their absence.

Thankfully for Quins fans they did and were integral to their teams' victory along with the extremely experienced Nick Evans who put in a strong shift at fly half. London Irish were yet another team to fall foul to late injuries as they lost Eamonn Sheridan, George Skivington and Kieran Low before the match and in fact they ended up with seven props in the match-day squad!

18 year old Tom Fowlie, who started his first ever Aviva Premiership Match, shone at Inside Centre and is certainly one to watch for the future; however on the whole Irish didn’t really get going against their local rivals.

Whilst Quins gained the win they did miss out on the bonus point and that could be costly in their fight for that final playoff spot, especially with Sale winning away from home at The Rec. Final Score Harlequins 23 – London Irish 9

The final match of the weekend was a Kingston Park where the Newcastle Falcons hosted the Worcester Warriors. The first half was a tense affair, both teams were reading each other like a book and defensively just looking to smash the other into next week and at the break the scoreboard read 9-6 to the home side.

It was a 'classic basement battle' and you felt that something or someone had to provide a spark in the second half to pull them apart and in the end the difference was a scintillating break from Andy Symons who put in Josh Drauniniu for the match winning score.

The try itself was slightly against the run of possession as young Joel Hodgson came off the bench and made a real impact for the Newcastle Falcons; however, Worcester did what they haven't been able to do all season and held on to secure their first Aviva Premiership victory since New Year’s Day 2012. It was a colossal win for Dean Ryan and his side, they have been gallant in defeat all season and thoroughly deserve their 4 points. Final Score Newcastle Falcons 12 - Worcester Warriors 17

The Aviva Premiership now takes another short break whilst a few rather large European fixtures are played, but rest assured it will be back with an outrageously large Round 19 in the blink of an eye!