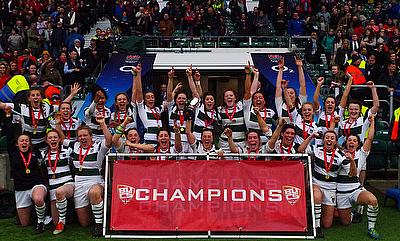 The University of Exeter clinched the Women’s BUCS Championship against Hartpury in extra time after a classic final at Twickenham.

England's Kelly Smith scored in the first half for Hartpury with Fiona McIntosh, Ellie Kildunne and Sarah Nicholas also dotting down as the Gloucestershire side led 22-13.

Poppy Leitch and Clara Nielson had crossed in the first period for Exeter and it was first blood to the Green and Whites after the interval as Hannah Gascoigne touched down, but Sophie Tandy's try put Hartpury back in control on.

However, two yellow cards shown to Hartpury changed the contest and Nielson completed her hat-trick to give Exeter a five point advantage with the clock ticking towards red.

But Hartpury halted Exeter's celebrations as Tandy grabbed her second score in the final play of normal time to make it 32-32.

Lagi Tuima then kicked the winning penalty at the end of the first half of extra-time to seal a thrilling win for Jo Yapp's side.

After the disappointment of missing out on the Premier South title to Hartpury, Exeter end the season with the Championship title on their first appearance to England HQ for five years.

As for Hartpury and head coach Susie Appleby, this has been a tremendous season considering it was their first campaign in the top level of university rugby but after controlling large portions of this pulsating contest, they could not fashion another late twist in the second period of extra-time.

Hartpury were at their fluent best before the break as they ran in four tries with McIntosh opening the scoring before Smith showed her international class to set-up England colleague Kildunne after Leitch had weaved over to level the scores.

Hartpury made their territory count as intelligent play from Tazmin Bricknell allowed skipper Nicholas to cross for Hartpury's third and on the stroke of half-time, Smith broke through to put her side in a good position at the interval.

The Gloucestershire outfit started the second period well, but Exeter sparked back into life on 52 minutes as a lovely offload from Tuima found Gascoigne who made no mistake from close range.

Hartpury then regained their grip on the final as Tandy scooted over, but two yellow cards with 10 minutes remaining kick-started the drama at Twickenham.

What a day! So proud as always of @EUWRFC in what was an incredibly tough game. But they played to their strengths and found a way to win. Thank you so much to everyone for all your support it is really appreciated. pic.twitter.com/raloktL1pS

Nielson capitalised on Hartpury's absentees as she barged her way over on two occasions to give Exeter a 32-27 lead and as the clock passed 80 minutes, they thought they had won a turnover in their own 22, but there was to be another twist.

Hartpury worked the ball out wide to Tanday who used her paced to dive over in the corner and send the game into extra-time.

But the Devon club did not lose their composure and Tuima, who also appeared for England in the recent Six Nations campaign, kicked the crucial points.

Highlights of the BUCS Women's Final to come on TRU