'Mature' England praised by Fearn ahead of second France test 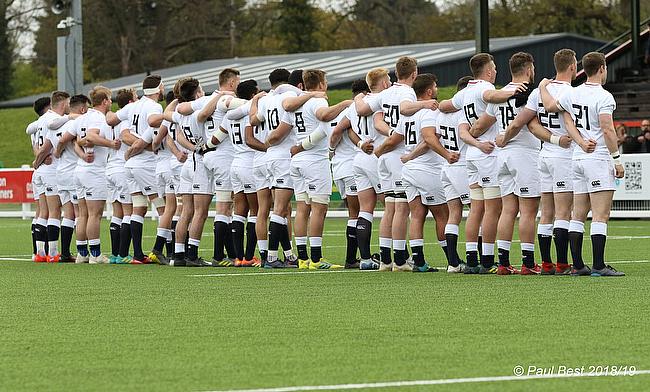 Darren Fearn has saluted England Students for showing an ‘air of maturity’ in their historic 27-17 win over France Universities.

The Students beat their French counterparts for the first time in a decade as England claimed victory at Chester last Sunday.

France did fight back in the second period as Clement Fontaine and Thibault Rampa both touched down after England had led 20-3 at half-time, however, the hosts were able to see the game out.

“We were really chuffed as a management group,” Fearn said. “The lads really did themselves proud and there was an air of maturity with the performance.

Fantastic day today for England Students. It was a brilliant showcase for the University game, the players did themselves & their Universities proud.

Big week now in the build up to France Away this Friday.

Loving every minute with this group.

“It sometimes gets questioned in the student game whether the game management is good enough, but for us, it was. There were times where we looked quite erratic, but it was all under our control and we knew what we were doing.

“It was a great advert for the university and college game. It was entertaining for the crowd and I think the people that came to Chester to watch us really enjoyed it. Everyone was buzzing after it and it was a well fought, well earnt and skilful performance.”

Fearn, who is also head of rugby at Northumbria University, took charge of England Students this season and he has been delighted by the attitude of his players during their first camp.

“To get that first win against France is a nice way to start!” he added.

“I am quite fortunate as I am the head coach, but there is a lot of people behind the scenes who put in a lot of hard work so it is really nice for them to get it as well.

“From a personal point of view, it is absolutely fantastic just working with such talented players. You have a perception of them because I have watched a lot of rugby and a lot of university games but seeing these guys come together, it has just been a pleasure to coach them.

“It is another level up and the environment we have is awesome. England Students is a pretty spectacular thing and the lads I coach are a brilliant bunch.”

With Fearn heading up the rugby programme at Northumbria, who compete in BUCS Super Rugby, he is very much aware of the ever-developing player pathway which university rugby is continuing to offer.

England Students is just another avenue for players to showcase their abilities and while the talent pool in the university game is harnessed by BUCS Super Rugby, there is plenty of quality in the tiers below and two players who shone in Sunday’s win ply their trade away from the top division.

“England Students gives them a taste of what the next level will be like,” Fearn said.

“It is great for the lads to experience it. This is something a little bit different as they are representing their country and this gives them exposure.

“What we first spoke about was that if they wanted to go on and play professional rugby or focus on work and play in the National Leagues which is a great level of rugby, England Students is a great opportunity for their names to get known.

“As a squad, it would be naive of us as a management group just to look at BUCS Super Rugby and say that’s where all the best players are. The two lads that started on Sunday, Bailey Ransom (Newcastle) and Christian Taylor (Manchester Met), they both had brilliant games.

“That shows there is talent throughout the leagues and it highlights the depth of the student game.”

Fearn, himself, is a former England Students player and knows all about the importance of embracing the opportunity to represent your country.

#thoughtfortheday from @SaleSharksRugby player @joshbeaumont392:
"Don't throw all your eggs in one basket, I'm a believer in the students game but it's also about striking a balance to earn a degree" #englandstudents pic.twitter.com/JmlL7Jr89V

Before Sunday’s match, Bath legend and ex-England international Paul de Glanville presented the Students with their jerseys and as they prepare for their second encounter with France on Friday, Sale Sharks’ Josh Beaumont also spoke to the group.

“It was great for Phil to come and present the shirts,” added Fearn. “Obviously, he’s a pretty well-known person within the RFU currently, but also, his history of playing speaks for itself. He is a big supporter of the student game as is Josh.

“Josh is a big icon for the student game. Coming through Durham and buying into the student game, he is one of the more recent ones to go on and do big things. He came in and spoke really well to the lads about his experiences with England Students, but also, about the university game.

“Josh was saying how he never beat France so it was nice for them to hear that because you realise they have done something good so far and if they go and do the double on Friday, it would be a pretty special achievement.”

England fly out to France on Wednesday for their second and final match which will take place at the Stade Gilbert Santiago.

After a wonderful season for university rugby, the Students can cap things off with a series win and Fearn is relishing the challenge on Friday evening in the south-west of France.

He added: “It is a short turnaround, but we have planned for it. Everyone, especially the medical team, have worked really hard over the last couple days and the players are ready to roll.

“We know it is going to be a big test and a hostile environment, but we’ve said we will walk out, chests pumped out and we will see how we go. If we get the win, absolutely brilliant but if we don’t, as long as we put in a good performance, we can look each other in the eye and be happy with what we have done.”