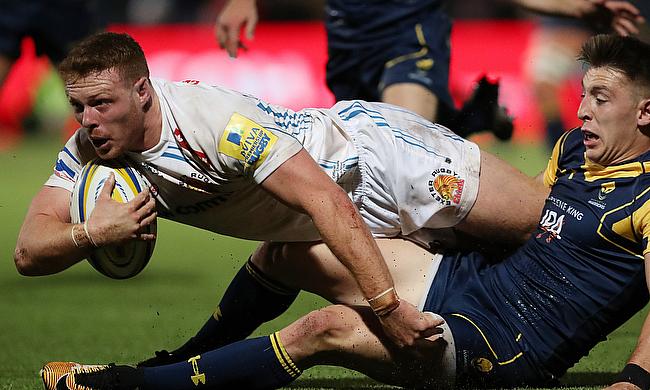 Sam Simmonds scored one of the tries for Exeter Chiefs
©PA

Exeter Chiefs have secured a play-off berth in the ongoing Gallagher Premiership as they defeated Gloucester Rugby 35-22 in the 19th round at Sandy Park on Wednesday.

This is Exeter's 15th win from 19 games as they extended their lead at the top of the table to 14 points while Gloucester are at eighth place.

Despite the win, Exeter will be anxious about the injury to Stuart Hogg, who limped off the field. A quick tap and go penalty provided Exeter a terrific start with Luke Cowan-Dickie going over the line and Joe Simmonds improved it making it 7-0.

Gloucester responded back when Matt Banahan dived from the corner in the eighth minute. Billy Twelvetrees missed the conversion but added the penalty to take the visitors into the lead in the 23rd minute.

Sam Simmonds' try at the back of a driving maul put Rob Baxter's side back into the lead while Joe slotted the extras. At the stroke of half-time Jonny Hill also dotted down for Exeter's third try as Gloucester started the second half with a player short after Charlie Beckett was sin-binned.

As Exeter had the numerical advantage, Ian Whitten finished in the corner to help them claim the bonus point while Jack Maunder's try in the 54th minute made the scoreline 35-8.

Banahan scored his second in the 62nd minute while Josh Gray also touched down in the 75th minute to provide some consolation try for Gloucester but that could not stop Exeter register their seventh consecutive win.

"We will wait for 24 hours - we are being fairly cautious," said Exeter Chiefs director of rugby Baxter on Hogg's injury.

"We won't take any risks, and we will see where he is at."