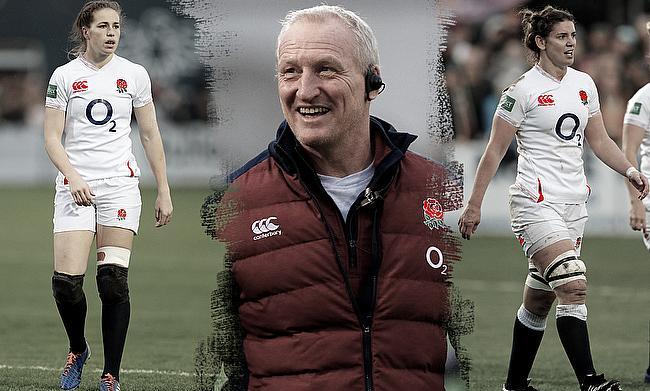 Red Roses Looking Forward to Sell-Out Doncaster Clash
Erika enjoyed playing rugby in Scotland, now she hopes to play against them
Catherine Spencer Q&A: Mud, Maul, Mascara
Kate Alder Column: 'I'd be lying if I said going into another break is easy'

Talking Rugby Union were at the Stoop early on Saturday afternoon to watch England’s Women dismantle the Welsh 66-7. In what is effectively England’s last game of the tournament due to the Coronavirus outbreak, Simon Middleton’s side left nothing out on the pitch, scoring 10 tries on the way to their bonus point win.

It was Wales who had the brighter start. With less than two minutes played, the travelling side had pushed England back in the scrum and pushed Lydia Thompson out in the corner. But in rugby, bright starts mean nothing.

It was England’s power game that got them the opening score, Poppy Cleall receiving the ball close to the line, getting her body position low to score the try. Captain for the day Emily Scarratt converted the try, the Women’s World 15s Player of the year not skipping a beat after two weeks off.

There was a fairly similar story. Very similar in fact. Again, it was Poppy Cleall barrelling over after some hard carrying close to the line. Again, Scarratt converted, making it 14-0 with 14 minutes on the clock.

For another 14 minutes there wasn’t too much to write home about. A series of scrums, penalties and turgid play in the middle of the field led to nothing spectacular. Well, until Katy Daly-McLean broke through the Welsh line, breezing past several red shirts and allowing for the lead to be extended. Scarratt could not convert on this occasion, her attempted kick cannoning off the uprights.

Power was clearly the flavour of the day at the Stoop. England’s fourth try came thanks to a driving maul after Welsh errors close to their own line. It was Vicky Fleetwood who was attributed with the try, Scarratt’s conversion meaning that the score was 26-0 at half-time.

The power game proved strong at the start of the second half too. Sarah Beckett’s break was kept alive by substitute Mia Venner, the debutant’s action proved vital, especially as a phase later Harriet Millar-Mills crossed the whitewash for a try. Scarratt converted the try, starting the second half in much the way that the first started.

Power, power, power. Having already scored two tries, Saracens lock Poppy Cleall was after a third. She got just that with 50 minutes played, the 27-year-old opting to take the harder route, running over to Wales Players to give her outside centre another two points from the boot.

We’ve talked about power a lot already. So why not talk about it some more. The introduction of Hannah Botterman and Sarah Bern led to more gainline successes, with a Bern carry eventually leading to hooker Amy Cokayne crossing the try line an Scarratt converting.

Wales could not be scoreless. An enthusiastic Mo Hunt was deemed to have tackled Welsh centre Kerin Lake without the ball, leading to a yellow card for the former teacher and a penalty try for the Welsh.

Ripping the ball on the Welsh try line was another stroke of luck for England. Or brilliance, depending on how you look at it. Zoe Aldcroft the person providing a seventh try on the afternoon. Scarratt converted the try, her attempt kissing the inside of the posts to be registrered.

Replacement loosehead prop, Hannah Botterman got herself a vintage score as well. From the base of the scrum, Sarah Hunter took her side within five meters of the try line, leaving Botterman the task of going under the sticks and letting Scarratt extend the lead even further.

There was very little time left on the clock when Sarah McKenna scored her try. With two Welsh players hanging off her the wing used her good leg drive to dot down in the corner. The angle was too severe for Scarratt to convert on this occasion, but by this stage, the hope of any Welsh comeback was long gone.

It has been a long and hard road back to international recognition for Harriet Millar-Mills. Playing at blindside, the Wasps lock showed exactly why she has been selected for Simon Middleton’s side. Carrying effectively with ball in hand, defending competently and providing a good attacking and defensive option in the lineout.

It is fair to say that England didn’t have to do too much throughout the game to beat the Welsh. Their power game was simply too much and it didn’t seem like Simon Middleton’s side even got into fifth gear in this demolition job.

If there ever had to be any criticism of the home side, it would be that they have been a bit messy in their own 22. Not pegged back there much by sides, it’s somewhat of a vacation home on the coast that they don’t give much thought to.

With all due respect, it’s hard to find many positives in this Wales performance. They were sloppy throughout, dropping ball and just outplayed by their opponents. They were unable and ill-prepared to deal with the English power game, simply left behind by England in West London.

Within any defeat, some solace can be found. Wales did push England close at scrum time, winning several penalties and giving themselves hope in a game where that was hard to come by. That set-piece should no doubt be the one that they hang their hat on, a great skill to build on.