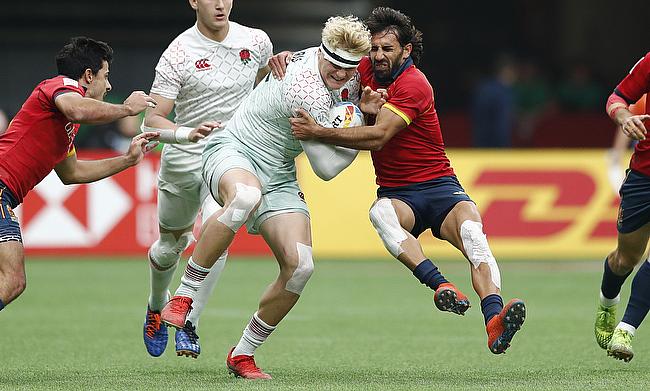 This time last year, Ben Harris had just got back from Cape Town. Representing England on the Sevens World Series, the 21-year-old was quietly becoming one of their star men and he was gathering pace for a Team GB selection.

First appearing for England Sevens in 2018 at a Rugby Europe event, it was in 2019 that Harris burst on to the World Series. It was clear he was growing as a player every time he took to the field, but following the financial implications of Covid-19, England’s Sevens programme was shut down.

With another year left on his contract, Harris was made redundant. Clearly, though, Mark McCall and his coaching staff at Saracens had been impressed by the England flyer and decided to bring him to the club on an academy contract.

Scoring a try on his Premiership debut against Gloucester in late August, Harris is already making a mark in the full format of the game. However, whilst to many his transition back to 15’s has seemed effortless, the truth is anything but.

“When I first came into the Saracens set up, I was thinking to be a really good player, you just have to beat your defender and win collisions or whatever, and that is how you make it,” Harris said.

“What I have really come to understand in my time there is, there is actually so much to the game. For me, specifically as a winger, of course there is kicking, high balls, regain work, chasing box kicks, defensive systems, all this stuff that I didn’t know before coming in.

Senior Academy wing @benharris709 is set to make his senior, Sarries and Premiership debut on Wednesday! ??

“I have almost had to start from square one again in relearning that trade. That has been a really mixed journey for me because it was tough for me coming in because I almost felt like I had gone backwards. I was really enjoying sevens and then I was dropped into 15’s in a really good environment. A world class environment.

“It was a really high standard to be dropped into and then I was so confused about it all. It was so different and that has been an exciting journey because I have learnt so much and have translated some of that from sevens to 15’s.”

Of course, Harris is not the first sevens player to have been taken on by Saracens. In recent history, Mike Ellery made his way to Copthall Stadium in 2014, returning back to the Sevens programme several seasons later with some European and Premiership winners medals in tow.

Chris Wyles, too, was an ever present in the USA Sevens setup, although he was an established 15’s player with Nottingham and Northampton for periods, before representing Sarries for 10 seasons.

A clear comparison between England Sevens and the Saracens both have a propensity for winning. In the past decade, Saracens have been English champions on five occasions, winning the Champions Cup on three further occasions in that time and an LV= Cup in 2015.

England Sevens too have had their fair amount of successes. At each of the last three one-off tournaments, Simon Amor’s men placed on the podium on each occasion and as part of Team GB brought home silver at the 2016 Rio Games.“I think both teams really pride themselves on their culture,” Harris said. “When Saracens talk about themselves, they don’t mention how much they have won, which definitely comes from the humility side of their culture.

“They pride themselves on their culture and if you think about it like that, coming in every day with everyone having the right mindset and the right attitude, which comes from the right culture, then you get the results and win. I don’t really know what it is like at other clubs, but I was worried about coming in. I thought maybe they might not be that welcoming to me and there might be a big divide between senior players and academy players.

“At the club, there are some incredible players there who are pretty famous and done amazing things in the game and they are talking to you at lunch and stuff. They were all chatting to me. In my first session all the players came up to me and shook my hand, saying hello and welcoming me, which was really nice.

“That was similar to the sevens as well. Obviously it was different there because it was a smaller group and you were bound to get to know everyone, but I think both teams pride themselves a lot on their culture and that has been really beneficial to me because at the moment that is all I have known in professional rugby, a really good culture.”

Having not played in front of fans for nine months, when England placed fifth overall in Vancouver, Harris started on the right wing last Saturday when Saracens hosted a Leicester XV in North London, beating their opposition 45-24.

With no direct date for the Championship’s return, Harris and his teammates are regularly training, hotly anticipating the opportunity to win back their place in the Premiership. Furthermore, Harris still has an eye on reaching the Tokyo Olympics that were rearranged for the summer of 2021.

Reaching the Games will be the culmination of a lifelong ambition. As a teenager, Harris competed in the triple jump and at one point in time, he was ranked number one in the UK for his age group (U15) after he won his event at the English Schools’ Track and Field Championships in 2014.

Many other players have attached themselves to 15’s clubs. Rich de Carpentier and Will Edwards have signed for Harlequins in the Premiership whilst Charlton Kerr is with London Irish in the same division.

“It is still definitely my goal for this year,” Harris said. “It is something that I have dreamt of for the last two years with rugby and I have always wanted to go to the Olympics since I did athletics as a kid.

“It is something that I definitely, definitely want to achieve and I am hoping to get the best opportunity to try and achieve that goal of getting into the GB team.”