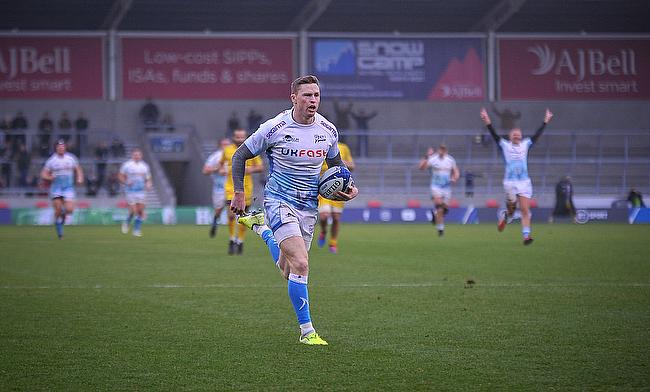 Mark Wilson: 'When I turned up a couple of months ago, I could sense a brood of excitement'
Josh Beaumont Column: You start to understand how much you miss playing the game
It only felt like yesterday that we were playing at Heywood Road – Tom Curry
Faf de Klerk was a star of the great South African show and now it’s time to shine for Sale

It was October 2009 when Chris Ashton scored his first European Champions Cup try.

The Sale and England winger had just burst on to the scene at Northampton and on their return to Europe’s top table, the Saints beat a strong Munster side 31-27, with Ashton dotting down on two occasions.

Over 10 years later, Ashton currently tops the try-scoring sheets in European’s elite competition having increased his total to 40 in this edition of the tournament following his try in Sale’s 25-15 win over La Rochelle back in November.

He is now four clear of former Toulon teammate Vincent Clerc and Ashton is still hungry for more success in a competition he seems to thrive in.

“I can’t remember it! Do you know?” says Ashton when asked about his maiden try in the Champions Cup but after some encouragement, the memories come flooding back.

“A bit of prompting was all I needed!” he says. “Yes, I do remember now! It was for Northampton and we won. It was a horrible day and they had a good team that day, but we managed to beat them.

“Obviously to be able to play in such an amazing tournament for such a long time has been very pleasing and I really hope I can put the record out of reach for anyone who is now coming up through the ranks!”

The 32-year-old admits that playing in the Heineken Champions Cup is special and it has, to an extent, shaped the success in his career having won the competition with Saracens in 2015/16 and 2016/17.

“Some of the fans and some of the stadiums that you go to in this competition are some of the best in Europe. Just to experience that as well as previously reaching semi-finals and finals of this tournament does mean a lot to me. I’ve had some successes and I’ve had some bad losses, but it has paved the way for my career.”

Saturday’s clash with Glasgow Warriors will mark the end of the road for Ashton and Sale in this year’s Heineken Champions Cup after the club's slim hopes of reaching the quarter-finals were dashed following their 30-23 defeat to La Rochelle last Friday night.

It was another narrow European loss for Sale, but the side are keen to end their campaign on a high in front of the AJ Bell crowd.

“It is frustrating to be out, but it’s also pleasing that we’re so close in these games,” says Ashton. “Years have gone by where Sale have found a big margin between themselves and other teams, especially in the European Cup, so it just shows we’re going in the right direction.

“We’re just so close to beating these teams and if we continue the way we are, we’ll eventually start winning these games.

“We’re at home this weekend and we don’t want to lose at home. We’ve got a great record at the AJ Bell and we want to keep it that way so whoever does take to the pitch on the weekend, it is their job to carry on doing that.

“We have had some narrow losses at home this season, but other than that, we have played really well. I think that will be our main motive this weekend. Yes, we are out of this competition but we want to win at home.”

Ashton came off the bench during last Friday’s defeat at La Rochelle, but one of the major positive he feels Sale can take from their European campaign is the emergence of more home-grown talent.

After impressing for the Sale Jets, utility back James Williams was rewarded with his first start for Sale last week whilst the likes of Tom Roebuck, Curtis Langdon, Gus Warr, Cal Ford, Sam Dugdale and Joe Carpenter were given opportunities by Steve Diamond.

“It is really promising,” Ashton says. “A lot of them have been playing well and they are training well.”

“Because we have got these world class players now at the club, you see the younger lads are learning quicker in the environment, developing quicker and they are able to pick little things up to help with their game which you wouldn’t necessarily find out from any other kind of player.

“It is a big benefit to them and it is now just transferring that over into games. It is very different to playing on a Friday night in La Rochelle to playing at Sale FC on the weekend so the more game time they get is invaluable.”

PLAYER INTERVIEW???| Mark Wilson - "I understand what it means to guys to play for this club" - @TalkRugbyUnion's @joeharvey34 spoke with Mark Wilson this week as the @EnglandRugby star looks ahead to his Sale Sharks debut!

Read the full story below ??

Following the trip to Devon, Sale take on Saracens in the Premiership Cup before they visit Allianz Park in the league as they look to fight on two fronts in February and Ashton hopes he and the side can relish this section of the campaign.

Whilst the team effort is top of the agenda for Ashton, the winger also has another personal milestone in his sights as he continues to close in on the Premiership try-scoring record.

“In terms of the team, when you look at where we are, we are sitting third in the Premiership table so you want to play and be involved.

“We are past Christmas now and we are going into the Six Nations so it is an opportunity for us to start picking up some wins to stay in the top half of the table. We are going to have some big-name players coming back over the next few weeks too so it is an exciting period for us.”