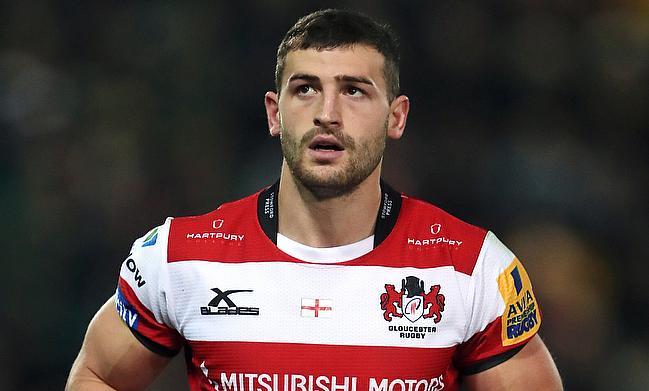 After missing four months of rugby through injury, Jonny May says he is “grateful” to be back in England camp as Eddie Jones begins preparations for the team’s tour of Australia this July.

In January it was announced that May would be visiting a specialist for a knee injury. In the days that followed that announcement, it became clear that the Gloucester Rugby wing would be missing the Guinness Six Nations.

On Wednesday afternoon, the 32-year-old spoke about the meniscus injury, about the time her had to spent non weight bearing and struggling to watch the game from the side line.

It was only last weekend in Gloucester’s last-ditch attempt at making the playoffs with a final round matchup with Saracens that May made his return from injury, his four months of intensive rehab coming to a close with a 54-7 win at Kingsholm.

“I hate it,” May said. “It is crap, but I’ve watched a few games and every bloody game I’ve watched someone limps off or gets carries off and it was my turn this time.

“There are always silver linings and opportunities within challenge to have a rethink about things, re-evaluate, have a break and then to be grateful again.

“You definitely take your body for granted, just running around and not being in pain. Just this last month or so, running around with the boys with the sun out, I’m just very grateful for that at the moment and in a good mood really.”

At the time, the injury was innocuous. Kicked in the back of the leg by Ruan Ackermann in their January 8 game against Saracens in London, the flyer came off the field with the knee slightly swollen.

The same knee he had surgery on six years ago, a scan showed that his meniscus needed to be repaired, despite the initial thought that the cartilage could simply be injected for the England stalwart to play in the Six Nations.

May even jokes about how his misfortune meant that his wife, Sophie, had to shoulder the burden of moving into the couple’s new home with the 32-year-old having to keep weight off his injury for a month-long period.

Getting 25 minutes off the bench last weekend, May wouldn’t score a try on his return to play, Eddie Jones duly called upon one of his most relied upon weapons during his tenure as England’s leading man.

During the Six Nations, Jones chopped and changed his wing selections across the tournament, with Max Malins, Jack Nowell, Joe Marchant and Freddie Stewart all getting run outs in that position.

Fundamentally, England were largely unthreatening in attack, scoring just three tries against opposition that wasn’t Italy, Freddie Steward the only wing to dot down. Against Italy, England did score five tries, but even then it was a fairly poor return for a nation with such talent at its disposal.

Now very much in contention to book himself on a flight to Australia for this July, the Gloucester wing saying that he is as keen as ever to impress on the highest stage of all as he draws closer to the end of his career.

Things you love to see ??@J0nnyMay back in the mix ?? pic.twitter.com/omeJO15zu3

“Every player would want to be playing for your country,” May said, “win trophies, be part of the best games, play on the biggest stages, I just want to stay healthy, work hard, play good rugby and anything beyond that, all of that stuff is out of your control really, who you play, when you get to play, so strip it back.

“I am probably in the last quarter or so of my career now and that is the goal, keep doing that, keep exploring, keep being curious and try and enjoy myself a bit more.

“You realise when you are injured you feel sorry for yourself for playing 80 minutes every week sometimes because it is tough. All those things, be happier, enjoy it and rip in and be the best I can.”

Describing the England camp that took place this week in London as “unique”, there is a certain amount of uncertainty heading into this summer.

This is partly as a result of a large number of the England cohort still being on club duty, those from Leicester Tigers, Saracens, Harlequins and Northampton Saints all looking to lift the Gallagher Premiership trophy.

As a result, Eddie Jones has added 16 uncapped players to his squad. May is joined by club teammates Freddie Clarke, Jack Singleton and Mark Atkinson, as a number of promising youngsters and high-performing Premiership players have been called into camp to at least play against the Barbarians.

This includes the likes of Biyi Alo, Freddie Clarke, Patrick Schickerling, Henry Arundell, Charlie Atkinson, Will Joseph, Max Ojomoh and Sam Jeffries, all of whom have impressed plenty in their club’s campaigns.

“We’ve no idea what this squad is going to look like next week,” May said. “Every time you come into England it’s constantly changing. Eddie is obsessed with finding the answer, but the questions keep on changing.

“Every time we come in there is something we look at differently and new players coming into the squad. It’s nothing different, because when you do some in here it is a bit uncomfortable and edgy – you do get challenged in the right way.

“But more so this time there is noticeable a lot of young players and new talent than normal. It’s quite a fun week because of that.”

?? Eddie on the 16 uncapped players included in this week's training camp ??

One thing that is particularly noticeable about the group is how many young players are involved in this England squad. This is perhaps a biproduct of the reduced salary cap in the Premiership, with clubs having to call upon their young stars more regularly.

Headline amongst those in the England squad are of course Henry Arundell, Tom Pearson and Will Joseph, the London Irish starlets all having recently committed their future to the Exiles after breakout seasons under Declan Kidney.

As a result, May is only left to be impressed by the young talent in England camp, many of whom that could still represent their country at age-grade level if needed, a prospect that the seasoned professional is left in bewilderment by.

“It feels like a 20s camp,” May said. “And the most bizarre thing I’ve seen in a long time is how much Will looks like JJ [Jonathan Joseph]. Oh my God, I can’t even get over it.

“I only met him yesterday, it’s how he moves, how he looks, his mannerisms. It’s everything. I want to be around the best players and be challenged.

“That’s very much why this is the best place for me to be off the back of an injury, because you’re competing with the best players in an environment with the best coaches and toughest training sessions.

“You talk about the talent, it’s just unbelievable; Henry [Arundell], Radders [Adam Radwan], Will [Joseph]. These guys are so good, I look at them and think two of those boys can still play for the 20s.

“I couldn’t in my wildest dreams envisage playing for them when I was 19, let alone being here. It’s incredible really how talented they are.”