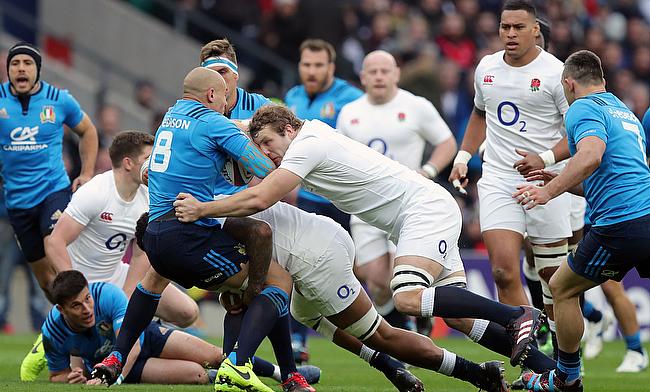 As England continued their winning run under Eddie Jones with a 36-15 triumph at Twickenham in their Six Nations clash on Sunday, we take a look at the player rankings.

Mike Brown: Missed a tackle which allowed Michele Campagnaro to score and was poor throughout. 5/10

Jonny May: Had limited opportunity to impress and needed to go looking for work. Jack Nowell will surely return against Scotland. 5

Ben Te'o: Was rewarded with a start for his impact off the bench, but left it late to justify the call with a try. 6

Owen Farrell: His 50th Test, wasn't one of his most accomplished performances, his expansive distrubution disrupted by Italian gameplan. 5

Elliot Daly: Showed his lightning pace to score his third England try and looked dangerous throughout. 8

George Ford: Suspect kicking from hand in the first half failed to relieve the pressure on England. Enjoyed more space in the second half. 6

Danny Care: Scampered in for a try after taking a quick tap penalty to turn the momentum in England's favour. 6

Joe Marler: Solid if unspectacular. With Mako Vunipola back, may now find it difficult to retain his place. 6

Dan Cole: Mixed display. Was not punished by Italy after conceding two early penalties, but scored his fourth try in his 72nd Test. 6

Joe Launchbury: Another barn-storming performance from the Wasps second row, who keeps taking man of the match prizes. 8

Courtney Lawes: Again on the flank in scrums and defensively dependable, as always. 6

Maro Itoje: Showed his athleticism in attack and defence, but England's lineout did not operate at its optimum. 7

James Haskell: Questioned Italy's tactics when he should have been finding a solution as one of England's leaders. 6

Nathan Hughes: Mimicked Italy in the second half. Needed to get his hands on the ball more. 6

Jack Nowell had the greatest impact, with two tries. Replacement hooker Jamie George was again impressive and sent Nowell in for his first try which eased England's anxiety and secured the bonus point. 8