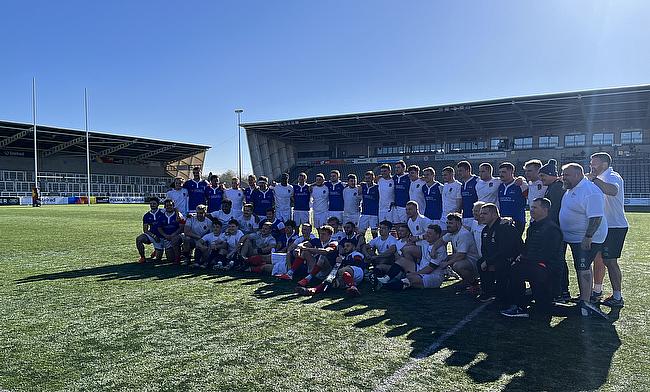 France started the game much the brighter of the two teams that had made their way to north Gosforth. Louis Boule received the ball on his wing from the kick-off, the Frenchman attempting to wind his way through white shirts and get the game going at blistering pace.

England’s lead was short-lived, who when trying to unleash their backs saw a pass read superbly by Gabin Lorre, the full-back picking off the University of Birmingham’s Sunni Jardine to dive over in the corner.

Antoine Aucagne knocked the conversion from the angle over with ease, before pushing one over from just inside his own half. That would be the total amount of points scored in the opening period.

There were, as you’d expect, near misses. The moment that stands out in the memory most is Will Rigg and James Langston combining in the midfield, the duo making headway down the right wing, although the final pass to Ben Fitzgerald was unable to stick.

There was a bit of extra bite as the second half got underway. This could no more be seen than when Matthew Woodward put a marginally late hit on Vidal, who turned to grab his fellow tighthead’s shirt and share a few choice words.

Tempers flared after Nick Brown’s converted try that levelled the game, the No. 8 barrelling over after picking the ball from the base of the ruck and catching his opposition napping, players were pulled into a melee, those in the stands liking what they saw as Titcombe merely watched on with his kicking tee in hand.

France replied almost instantly, Samuel Hostalrich the beneficiary of a continued spell of blue-shirted pressure. The centre’s try went unconverted, leaving England knowing that only two penalties or a converted try would hand them a win.

In the end, the game was decided by the boot of Titcombe. Each of his efforts came from distance, the first after France held on at the ruck, the fairly central kick sent over with relative ease.

Much like his first kick of the day, his second and winning effort came from a scrum penalty. Looking relatively unphased by what he had to do to hand England a hard-fought victory.