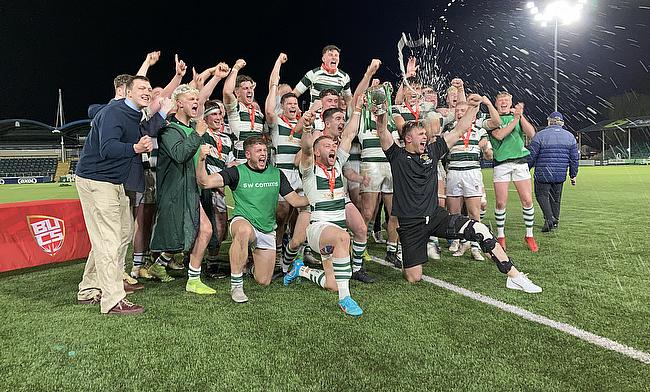 Late flurry of Hartpury tries secures Mo Hunt’s team National League Championship title
Near misses of years gone by cannot be in Exeter's thoughts as they target university rugby's biggest prize
The past, the present and the future - Exeter University is a proven pathway for success
BUCS Super Rugby: The blank canvas and why we are set for a season of intrigue

The University of Exeter launched a dramatic late fightback to steal the BUCS Super Rugby Championship title away from Durham University following a nail-biting 14-13 win.

Dafydd Jenkins' converted score five minutes from time sealed a first BSR title for Keith Fleming's side after a final which showcased why the profile of the student game continues to rise.

Exeter, who had finished six points behind the Palatinate in the domestic season, led 7-3 after Tom Hitchcock's try but a blistering score from Nicholas Jonas edged Durham ahead just before the break.

After a bruising second period, a penalty from Will Nicholson put the North East outfit in front heading into the final 10 minutes, but back came Exeter as Jenkins, who has represented the Chiefs in the Gallagher Premiership and in the Heineken Champions Cup this term, burrowed his way over for the decisive score.

Alex Keay's Durham turned up to Worcester Warriors' Sixways Stadium aiming to secure the double after being denied the opportunity to do so in 2020 due to the Covid-19 pandemic.

Approaching the end of the first half, and Nick Jonas gets @DURFC's first try of the Championship Final???? #BUCSSuperRugby #DUREXE pic.twitter.com/LYudctanW8

The opening exchanges were played at a furious pace with both sides determined not to give an inch; only the chants from the stands drowning out the thud of the tackles on show.

Hitchcock showed exactly why he is on the books of the Exeter Chiefs and also involved with the upcoming England Students squad after an early, surging run but the centre was shutdown following an excellent tackle from Sol Hyde.

Nicholson pinged over a penalty after 10 minutes to relieve the early pressure for Durham before it was the turn of the North East side to fashion a decent chance for themselves.

A break from Jonas was superbly halted by his opposite number Dan John, but in terms of tries, Exeter hit the target first on 15 minutes when Hitchcock burst through three tackles to dot down following a solid line-out move.

The Green and Whites were now starting to dominant possession and territory whilst Durham's forward momentum was being halted by some inaccuracy.

However, as the half-time whistle approached, the men in purple produced a moment of magic as Ollie Walker's scintillating run was matched by an outrageous offload which was latched on to by Jonas.

The league champions held a slender three-point lead at the break and the start of the second period certainly had a cagey, cup final feel to it as both teams slugged it out in the centre of the park.

We've only gone and done it!! pic.twitter.com/LtgMg2MYIK

An injury to Durham centre Jack Reid meant a reshape in attack for Keay's men, but the changes on the field did nothing to decrease the intensity and ferocity in this absorbing contest.

As the game entered the final quarter, the tension started to show as a misfiring line-out by Exeter deep in the Durham 22 and handling errors from the Palatinate summed up the sense of occasion in the West Midlands.

A penalty conceded by Exeter bang in front of the sticks settled Durham nerves as Nicholson duly delivered from the tee with 14 minutes remaining but Fleming's side responded with waves of pressure to up the levels of tension once again at Sixways.

The Green and Whites huffed and puffed - with John and replacement scrum-half Niall Armstrong setting the platform - before Player of the Match Jenkins finally found a gap in the purple wall to dot down.

It looked as though there would be one final twist as Durham won a late penalty straight from kick-off, but Nicholson's effort sailed just wide of the posts. John then received a yellow-card late on for Exeter and despite Durham battering their line, the Green and Whites stood firm to see out the win.