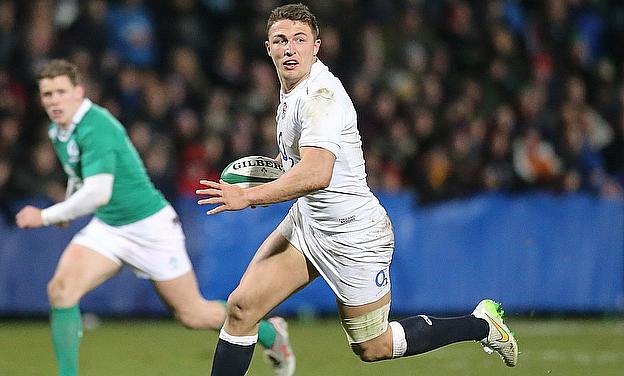 Sam Burgess made a forgettable representative union debut as England Saxons ground out a worthy victory over the Ireland Wolfhounds in Cork.

With head coach Stuart Lancaster watching from the stands at a capacity 8,200 Irish Independent Park, Burgess produced several conspicuous errors in the first half before becoming a peripheral figure after the interval.

Only eight matches into his union apprenticeship and clearly still a novice in the code, the Bath inside centre failed to make any meaningful impact on a disappointing night to end any fanciful notion of playing a role in England's RBS 6 Nations campaign.

But the former league superstar was hardly alone in failing to grab his opportunity as the Saxons toiled against a strong Wolfhounds line-up with openside Matt Kvesic, substitute Maro Itoje and number eight Thomas Waldrom among the few to impress.

Fly-half Henry Slade and wing Christian Wade crossed and Slade kicked two penalties in a match that saw the set-piece splutter all night, but the ability to seize victory in a difficult assignment will please the English management.

All of the home side's points came from the boot of Ian Madigan, who landed three penalties in a bitterly cold night.

Sean O'Brien, alongside Gordon D'Arcy and Keith Earls one of three British and Irish Lions picked by the Wolfhounds', made a successful return from shoulder surgery in his first outing since September, but whether it will be enough to earn a starting spot in the Six Nations opener against Italy remains to be seen.

England's second string was described as "the strongest Saxons team we've ever put out" by Lancaster with Chris Ashton, Marland Yarde and Waldrom among a number of players possessing Test experience.

But all eyes were on Burgess, and right from the start the omens were poor as he sought to make his presence felt with an early run only to be drilled into the turf by Dominic Ryan, conceding a penalty in the process.

Problems continued to mount for the Saxons as Ashton shot out of the line to make an unsuccessful tackle on Earls, who then darted clear, before their scrum lost the ball against the head.

Ashton took a palm in the face from O'Brien as tempers threatened to boil over and Burgess' evening showed no sign of improving as he sent a pass straight into touch before an offload went astray as the Saxons finally built some momentum.

The visitors' most promising spell was rewarded with a 22nd minute try for Slade, who finished a fine move that saw Waldrom produce a smart offload and Elliot Daly carry with intent.

Apart from a bright move by the Wolfhounds that ended when O'Brien spilt the ball forward, the match lost all direction amid a succession of errors from both teams.

Madigan and Slade exchanged penalties and the second half opened along similar lines with nether side able to stamp any authority on a game littered with mistakes and regularly interrupted by the whistle of referee Neil Henessey.

Madigan slotted a third penalty to reduce the deficit to 11-9 as a decisive final quarter counted down, featuring a poor spell from Burgess that saw him drop a pass and miss a tackle before being replaced in the 74th minute.

The Saxons pressed in the closing seconds and were rewarded when Wade darted over under the posts with Slade converting.

Sam James: 'England call-up was a big surprise and a massive honour, but I still have to improve'