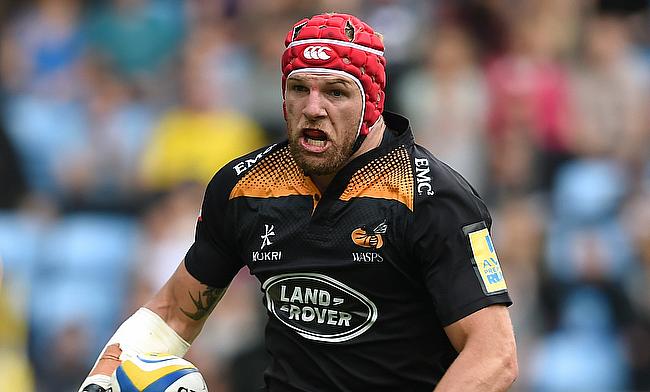 England name James Haskell in 25-man squad ahead of game against Scotland
James Haskell to exit Wasps at end of ongoing season
Haskell and Marler included in England squad for Italy clash despite suspension
Rugby Rumours: Haskell hit by offers, Rensburg to return, Reunited with Saracens and Nonu on the out

England international James Haskell will be switching to Northampton Saints ahead of the new season from rivals Wasps.

Haskell had already confirmed in February that he will end his association with the Ricoh Arena outfit after spending 15 years with the club separated by two stints.

The 33-year-old was reported to have approached by a number of foreign clubs but the move to Northampton Saints will mean that he will still be in the reckoning for the 2019 World Cup in Japan for the red rose team.

“I’m really excited and humbled to be joining a giant of English rugby in Northampton Saints,” said Haskell.

“Having had the opportunity to play against them for many years now, I know this is a Club with a proud history and a set of passionate and loyal supporters who always make their presence felt.

“It’s no secret that I want to continue my international career for as long as possible; the only way I can do that is by putting my best foot forward in club rugby and helping Saints fight their way back into contention for silverware.

“There’s a real buzz around Franklin’s Gardens at the moment with the arrival of Chris Boyd, a new coaching team being put in place and a number of top-quality players also joining the squad. I can’t wait to get started in Black, Green and Gold.”

Haskell has played 77 Tests and was recalled by England boss Eddie Jones during the Six Nations tournament earlier this year after almost 12 months away from international set-up.

Haskell's Wasps team-mate Danny Cipriani has also confirmed that he will switch to Gloucester Rugby when his contract expires at the end of the ongoing season.

?? “There’s a real buzz around Franklin’s Gardens at the moment and I can’t wait to get started in Black, Green and Gold.”

Read the full story as @jameshaskell becomes the latest to sign up for a new era at the Gardens#SaintHask??https://t.co/S8COesvdQF