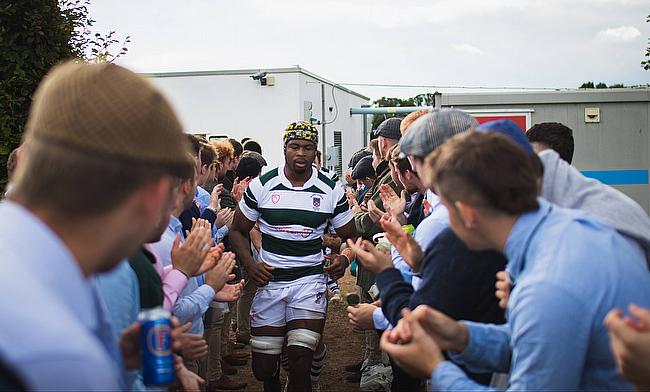 Whether the club are waiting until after this weekend to fill in the 19-year-old’s page is an unknown, but within the walls of Sandy Park, Tshiunza is currently writing his own remarkable story.

“Physically, he’s just going to get bigger and better,” Keith Fleming tells TRU. “He is a very athletic lad. He doesn’t hold himself back so he will fire himself into defence and he will carry hard when we are in attack.”

Fleming is Tshiunza’s Head of Rugby at the University of Exeter. One of the most exciting talents in his squad, the 6ft 6in forward, who only made his debut in BUCS Super Rugby last month, is in line for his first international cap after being named in Wales’ matchday squad for Sunday’s meeting with Fiji.

“The exposure he is getting now at international level will just help move him on as a player and the more and more experience he gets, the better he will get,” Fleming adds. “He looks really bright. He has just got to keep doing what he is doing, work really hard and I am sure things will happen for him. It might mean we don’t see too much of him!”

?? Current student @ChristTshiunza has been named in the @WelshRugbyUnion squad to take on Fiji this weekend.

You can read all about his inclusion here ??https://t.co/pI463ua7pO pic.twitter.com/xU6QQYZOJv

In truth, Fleming has only seen glimpses of Tshiunza at full pelt.

The lock/back-row lived in DR Congo until he was six before his family moved to England and then Wales. From there, Tshiunza left Cardiff to sign for Exeter on a four-year academy contract in 2019.

Shortly after he had arrived in Devon, the coronavirus pandemic halted university rugby, but he was able to pull on the Green and White jersey for the first time this season and he has made one further appearance for Fleming’s side.

Tshiunza’s rise to international recognition has been relayed on numerous occasions ever since he was named in Wayne Pivac’s plans in October. The call from the Wales boss came before he made his BUCS Super Rugby bow for Exeter against Cardiff and by that point, the 19-year-old had also represented the Chiefs in the Gallagher Premiership.

“We have known about him for a while!” Fleming laughs. “Because of everything which went on, he wasn’t able to play. We have been working with him all the way through and it is just nice to get the opportunity to see him play, but now he is away from us!

“He had made his debut for the Wales U20s earlier in the year [in the Six Nations against Ireland] and because of the sheer size of the man and his tender years, you could tell there was always going to be a possibility, if nothing else, that he would be called into the camp which is what has happened.

“In a way, he could have lost his head when we played Cardiff, but he just parked his conversation with Wayne until after his debut and got on with what he had to do. He is very mature for a young man.

“To think that we’ve helped a little bit along the way is really satisfying. At the end of the day, it is all about player development. The little bits we can do to move players on, the better they will be.”

Fleming jokes the university side are ‘the victims of their own success’ at times, with Tshiunza being away with Wales whilst seven current players have been selected for Chiefs’ Premiership Cup side this weekend.

But with alumni which includes the likes of Sam Skinner and Tom Lawday, Fleming takes pride in the pathway which has been forged at Topsham.

“We have got a proven track record with a lot of players,” Fleming says proudly. “It is not a case of can it be done because it has and is still being done.”

When Fleming spoke to TRU in September, he recalled a time when “people weren’t taking a lot of notice” of university rugby, but with institutions such as Exeter focusing on player development - both on and off the pitch - the pathway is becoming harder to ignore.

Wales pick a new look squad ahead of this weekend led by Ellis Jenkins to face Fiji in their third game of the #AutumnNationsSeries. #WALvFJI

Christ is balancing both his studies and rugby. He is working really hard academically. I think the key is just getting that balance right because it teaches young players that work discipline. The way these days are now, a lot of lectures are online and we know Christ works hard at that side of it and I think they are better people for that work discipline aspect. They work hard on and off the pitch.”

Tshiunza, who is studying sports science, will swap his textbooks for the Wales playbook on Sunday afternoon when he is likely to make his international debut.

Whilst his university will begin their preparations for a trip to Loughborough on Wednesday - aiming for a fifth successive BUCS Super Rugby win - the 19-year-old will remain in camp with Pivac’s side as they gear up for their final Test of the autumn against Australia.

We will have to wait and see whether Tshiunza can match his number of University of Exeter appearances for Wales, but for now, Fleming has some advice for one of the club’s most promising individuals.

“He has just got to enjoy the moment. He will understandably be a little bit nervous and I know he will be, but once he is on the pitch, he will be fine. As soon as he makes that first hit, he will be fine. He just has to enjoy it because there will be very few young men like Christ who get the chance to experience that.”