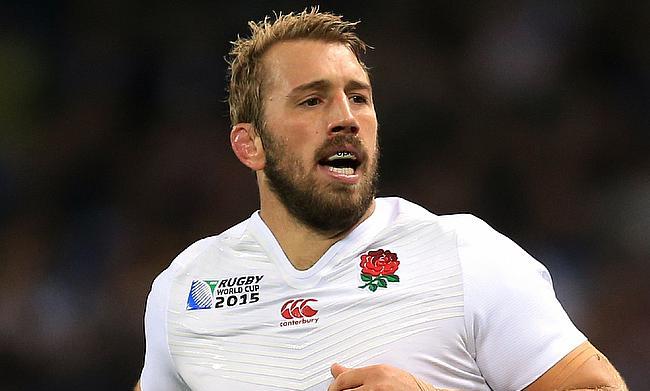 One week until the autumn internationals with Elliot Daly
Simon Amor: New faces can really “attack” latest England camp
Jamie George: There are certainly similarities to Japan
Eddie Jones: 'Our job is to put smiles on people’s faces'

Eddie Jones has heaped praise on his former captain Chris Robshaw ahead of this weekend’s clash between England and the Barbarians.

The Harlequins legend looks set to play in his final international fixture when the two sides meet at Twickenham on Sunday, but Robshaw will be pulling on the famous Black and White jersey of the BaaBaas rather than the Red Rose.

The 34-year-old made 66 appearances for his country and he captained his nation from 2012 to 2015, when England fell at the pool stages of their home World Cup.

Jones stripped Robshaw of the captaincy upon taking the England job, but the Quins flanker put his disappointment to one side to become one of the most consistent performers in his position.

The England boss continued to select the loose forward and Jones feels Robshaw’s influence helped with the revival of the national side following their disappointing World Cup campaign in 2015.

Jones told the media on Tuesday: “He [Robshaw] is an outstanding guy. I made the tough decision that he wasn’t going to continue as captain and when you take something away like your national team captaincy from a player, it is a difficult time.

“His response was ‘right, I am going to be the best number 6 or 7 whatever you need’ and we had a good discussion about what we felt we could maximise in his game. He went about doing that and he was absolutely brilliant for us. He is a fine testament to what the English rugby game can produce.

“It was a difficult time in English rugby being knocked out of the World Cup pool without making the play-offs in your home World Cup. You can have those things around for a long time and I am sure, at the back of his mind, it is still there.

“He was one of the guys that helped lift England back to where they should be in world rugby. We had that run of 18 games [unbeaten] and he was one of the foundation members of the team. He still continues to give his best so our job on Sunday is to make sure he doesn’t have a great game!”

Robshaw will be lining up for the Barbarians against an England side who will be competing in their first fixture for over seven months.

This weekend’s uncapped international will be followed by the conclusion of the Six Nations and Jones is looking forward to the occasion.

“We’ve got a number of players who haven’t played for four or five weeks and we are conscious of the fact we have got the Six Nations game afterwards so we are looking at this as a two-week selection,” said the England boss.

“I can remember playing for the Barbarians about 30 years ago and they are high scoring games! I remember coaching the Barbarians against Australia at Wembley and it was the toughest, most brutal game of rugby.

...he's going to be in charge of the world famous invitational side when they face @fijirugby at Twickenham on 16 November ?

“The Barbarians now is a different outfit to what it was before. Some of the games lend itself to open play and some of the games lend themselves to really tough Test matches. I remember the last try the Barbarians [led by Jones last November] scored against Fiji down the right-hand side from Morne Steyn with the pink socks on. It was a brilliant try and they are capable of scoring those tries, but for us, it is a serious game of rugby and that is how we are approaching it.”

In terms of Jones’ selection, Elliot Daly was omitted from the squad on Tuesday and the England head coach revealed the utility back has had “a bump on his leg for a period of time.”

The Saracens man will undergo further assessment before the extent of his injury is confirmed, but as for the players available to England, Jones is keeping his options open ahead of a busy autumn period.

He added: “I think there is always a lot of good players in English rugby and selection is always a contentious issue.

“At the end of the day, it is a judgement by myself and the coaching staff. It is our job to select the players who we feel can be profitable for the team in the short term and then keep monitoring the players who are going to be productive in the long term.”

Jones also admitted he was very impressed by the performances of some of Exeter’s England contingent in last weekend’s Heineken Champions Cup final and there is a strong feeling that a fair few of the Chiefs’ European winners will feature for the national side over the coming weeks.

Following England’s Six Nations finale against Italy at the end of the month, they enter the Autumn Nations Cup and Jones is keen for his side to raise their game for their upcoming fixtures.

“Our aim is to be better than that [how England were performing before lockdown], not to be where we were at. We have had two camps to try and get the players in the right physical, tactical and psychological standard that we need to play better than we did. That is our aim. We are aiming high. Whether we get there, we will wait and see.”