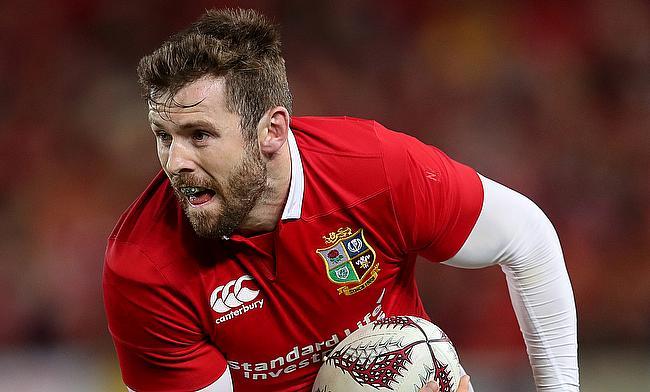 Having made his debut in 2016, Elliot Daly has been an England constant ever since.

Representing his country at inside centre, on the wing and at full-back, the perfect position for the 28-year-old has been a talking point since even before his first cap.

Simply, it doesn’t matter where he plays. Whether it be in the midfield or in a back three, the Saracens man has been adept and within a year of his international debut, he went on a British & Irish Lions tour to New Zealand.

It was on that tour that the Englishman was able to write himself a bit of history. Striking a penalty over in the 41st minute against the All Blacks in the final Test of the series, Daly became the first man to have scored points both for and against the Lions.

As a 20-year-old, Daly was part of the Barbarians squad that took on Warren Gatland’s Lions in Hong Kong in a warm-up game for the touring side before they arrived in Australia.

Daly had even scored for the BaaBaas against England at Twickenham that May, the then youngster showing that he had the chops for international rugby. Next Sunday, he is in with a shot of playing against the side he represented so finely seven summers ago.

It is a Barbarians side full to the brim with familiar faces for the 28-year-old too, with 11 of his Saracens teammates named in Vern Cotter’s squad. Add in his former England colleague Chris Robshaw too, Daly is looking forward to the prospect of taking on his friends at an empty Twickenham.

Thank you to @Jc30011973 for the amazing canvas great quality! It is going to look great on the wall

The latter was one of those players, for many, who could have even warranted a place in Eddie Jones’ squad for this stretch of autumn fixtures. It is not as if the 20-year-old fly-half doesn't have the pedigree for international rugby, with his cousins Billy and Mako well being established England internationals and his father Elisi representing Tonga on over 40 occasions.

There has even been rumours of the young Vunipola seeking out a loan move for the 2020/21 season to not only maintain the momentum he gathered with Saracens, but to push for international selection for next spring’s Six Nations. Having been around the developing player for much of the last 12 months, Daly says that the fly-half has made a good impression so far.

“I have been really impressed with him since I joined Sarries,” Daly said. “I think for a young guy, he has worked incredibly hard and I think has found the way he wants to play in the last couple of years, which is brilliant.

“He always wants to learn, he listens, but he is very forthright in what he wants to do on the pitch as well, which is exactly what you want from a 10.”

Playing on the wing twice earlier this year and then at full-back two further times, Daly’s importance to England’s backline is clear for all to see. Placed in the 11 shirt because of injury to Anthony Watson and Joe Cokanasiga, Daly’s transition back to the left wing was seamless and it provided support to George Furbank who was taking his first steps on to the international stage.

What is relevant, toom is that new attack and backs coach Simon Amor trusted the former Whitgift pupil with a new position after a more than solid World Cup campaign in the 15 shirt. With plenty of stern tests ahead, Daly says that England will experiment with some aspects of their attack against the Barbarians next Sunday afternoon.

“I have played in a few of these games and it is a really good chance to try things that you think might work going into the autumn or look into things that you might not look into in certain games," Daly said. "At the end of the day, you are playing for England and playing for Twickenham as well. It is just a good chance to play with each other before games really matter.

“I won’t give too much away, but we are looking at trying some different things at the moment. The way he (Amor) has come in is really good. He brings a lot of energy to training, he has lots of ideas, he sits and listens as well, so to have a coach that listens to your point of view when you are on the pitch is brilliant.

“At the end of the day, they can only take you so far, but on the pitchm you might be feeling something different so to have someone like that, it has been brilliant so far.”

Congratulations to former London Scot @elliotdaly who is in line to make his England debut against Ireland! #TBT pic.twitter.com/1xK6hDTeF9

Daly has in fact worked with Amor before. Registered with London Scottish for a month in 2011, he played under Amor on two occasions, scoring a try against Esher on his second and final appearance in blue.

Now an international star, Daly will be returning to England’s second division with Saracens following their enforced relegation. As things stand, there have been no dates released by the RFU for the Championship to return as the governing body are in a deadlock with both club owners and the government about letting fans into venues, a source of income that many in the second tier are reliant on in order to operate.

It is another reason his Saracens teammates will be donning black and white shirts at the weekend as the playing staff have delayed the start of their required three week break as a result of not knowing when their next game is.

For Daly, however, he is focused on the here and now. With six games come for England, the 28-year-old sees little point in dwelling on what he can’t control.

“All that stuff is up in the air and the only thing we can control is what we are doing right now,” Daly said. “Until then (December), all we can be thinking about is how we can do our best here and how we can put our best foot forward. So, when it comes to that, you don’t know what is going to happen.