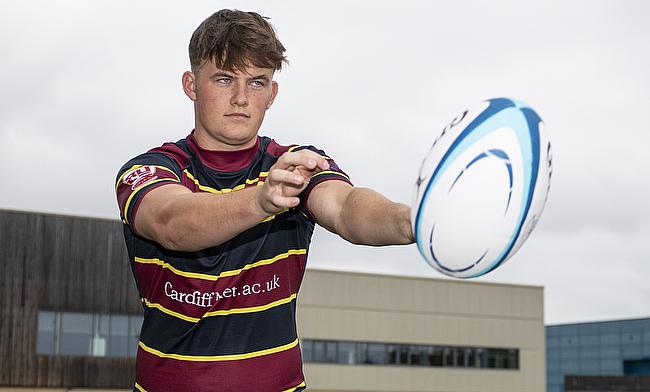 Participation and enjoyment - why the University of Leeds are putting their players first
BUCS Super Rugby Round-Up: Beckett blow Bath away and Exeter thrash Swansea
University Rugby is strengthening its status within professional pathways - and it is only going in one direction
BUCS Super Rugby: The blank canvas and why we are set for a season of intrigue

Two sides maintained their strong starts to the season in BUCS Super Rugby, plus it was a memorable day for Christ Tshiunza who received a call-up to the Wales squad.

Also, we wrap up the best of the action from the Women’s National League and some of our key divisions in BUCS Rugby.

The University of Exeter bounced back from their narrow defeat to Durham by scoring six tries as they beat Cardiff University.

While this was an excellent result for Keith Fleming’s side, the day arguably belonged to second-row Christ Tshiunza who received a shock call-up to the Wales squad an hour before he debuted for the university.

A great win today against Cardiff topped off by the incredible news that Christ Tshiunza has been named in the @WelshRugbyUnion squad for the upcoming Autumn Internationals.

And the good news kept coming for Tshiunza and Exeter as they got off to a solid start against Cardiff when Jacob Morris dotted down from close range in response to an Elliot Haydon penalty.

Cardiff, who were edged out by city rivals Cardiff Met in Round Two, could only muster a Jake Thomas try.

So from playing against Cardiff University to possibly competing in the Welsh capital for the national side during the autumn, it is safe to say it was an afternoon to remember for Tshiunza.

Cardiff Met maintained their unbeaten start to the BUCS Super Rugby campaign by beating Loughborough in a gripping contest.

A late score from the Midlands club set up a grandstand finish in Wales, but the Archers held out for another tight victory.

It was honours even at the break as Douglas Bridge’s try and eight points from the boot of Reece Mallone were matched by Met’s Rhys Barrett and the kicking of Brad Roderick-Evans.

It was first blood to Loughborough after the interval, with skipper Teddy Leatherbarrow grabbing the score but the Archers were immediately on target again through Matthew Marley.

Mallone and Roderick-Evans swapped penalties once more before two more kicks by the Met fly-half nudge the home side in front.

The No.10 was holding his nerve from the tee as he slotted another three points for hosts and despite Loughborough roaring back, Danny Milton’s side clung on to the win.

Reigning BUCS Super Rugby league champions, Durham, are also yet to taste defeat this term after securing an away win at Swansea.

Alex Keay’s side wrapped up the bonus point in an entertaining first half with Harry Craven, Tom Fletcher and Guy Pepper all going over.

David Armstrong added to Swansea’s only score of the opening period at the beginning of the second 40 before Daf Land’s quick-thinking saw him go over the whitewash.

The hosts now trailed 31-19, but Durham were next to add to their try tally as they tightened their grip on proceedings and it proved to be enough for the North East outfit to clinch their second victory of the campaign.

Leeds Beckett’s unbeaten start to the season was ended by three-time BUCS Super Rugby champions Hartpury, who sealed a 20-10 win in Round Three.

Tries from Will Goffey and Brandon Wood helped the home side into a 14-10 lead at half-time, with a surging John Okafor effort keeping Beckett right in the contest.

Joey Winfield kept the scoreboard ticking in Hartpury’s favour with two penalties and that ultimately secured a second win on the bounce for Dan Murphy’s men.

The University of Bath responded to their opening two defeats by thumping Northumbria University as Aaron James’ side kicked-started their season in style.

The Blue and Gold went into half-time at Kingston Park with a 41-7 lead after scoring all seven of their tries in a blistering first 40.

The home side could only manage a second try two minutes from time, but this was a sensational way for Bath to bounce back after losing to Leeds Beckett and Hartpury.

Loughborough backed up their opening day win against Hartpury with a 10-7 victory over Durham in the Midlands whilst Edinburgh built on their thrashing of Northumbria by beating Cardiff Met 20-7.

Elsewhere, Hartpury’s clash with the aforementioned Northumbria was cancelled.

We go into Men’s Premier North 1 and Newcastle are the only side in the division to pick up maximum points from their first two games. After thrashing Leeds Beckett 2nds 71-17 last week, the North East side clinched a 13-12 win over Nottingham thanks to the boot of Tom Quinlan.

Nottingham Trent and Durham 2nds have won both of their games this season, with Trent defeating Leeds Beckett 2nds 45-7 on Wednesday whilst the Palatinate beat Leeds 22-7. Also in this division, Birmingham secured their first victory of the campaign after getting the better of Edinburgh 26-17.

The 2’s put in a dominant performance on the racecourse, the game finishing 22-7. Plenty more to come from this team. #DURvLEE

Exeter 3rds currently lead the way in Premier South 1 in these early stages of the season. After getting past Cardiff Met 2nds in week one, they hammered St Mary’s 80-7 on Wednesday.

Nestled just behind them in the table are Bath 2nds. They beat St Mary’s 34-6 in their first match of the term and followed it up with a 24-14 victory over Exeter 2nds.

In Men’s Premier North 2, Sheffield built on their opening day draw as they beat Doncaster 24-13 in an all-Yorkshire affair.

Last week, the team from the Steel City drew 26-26 with Strathclyde and the Scottish outfit also matched Sheffield after coming away from Manchester Met with a 21-14 win. Elsewhere, Loughborough 2nds kicked off their season with a 14-12 triumph over Glasgow.

In the south, Cardiff Met 3rds are 2-0 after beating Portsmouth 34-0 on their travels whilst second-placed Reading sealed their first win of the term thanks to a 36-13 victory away at Brighton.

Also in this league, the University of South Wales defeated UWE 17-15 to begin their campaign on a positive note and the exciting Brunel University convincingly beat Hartpury 3rds 48-0 after running in seven tries.

St Andrews University made it back-to-back wins in Scottish 1 after beating Heriot-Watt 47-7. The league leaders defeated Aberdeen in round one, but the side from North East Scotland were able to dust themselves off and bounce back immediately by securing a 29-0 win over Glasgow 2nds.

If you’d like your university to be included in our round-ups, please let us know!