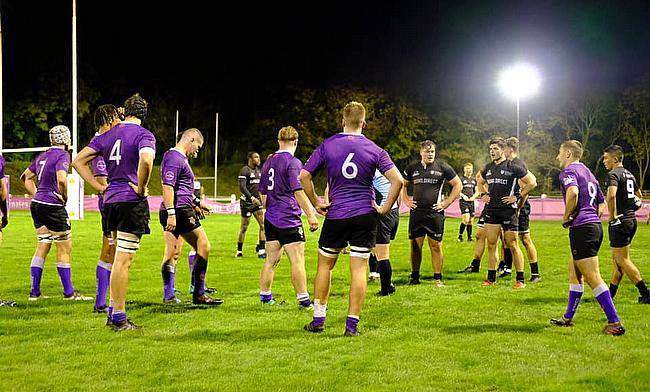 Derby day was always a highlight for Dombrandt
Beckett up to third, Hartpury thump Northumbria and Durham bounce back
Durham tighten grip at the top after defeating Exeter
Grant focused on a return trip to Twickenham

Durham University and Leeds Beckett both produced impressive displays this week as the top two in BUCS Super Rugby sent out a statement to the rest of the division.

Below is a full review from BUCS Super Rugby, plus we highlight the University of Edinburgh’s perfect run in the Women’s National League as well as the key results from our selected BUCS divisions.

Durham University celebrated their ninth victory of the season as they produced an accomplished display to see off current BUCS Super Rugby champions Hartpury 25-7.

Alex Keay’s side head into their final two games of the calendar year seven points clear at the summit and the North-East outfit found themselves in a commanding position at the break in this encounter.

The Palatinate were 17-7 ahead after the restart and a third try of the evening helped them to victory, whilst Hartpury’s sole score came in the first period.

Durham’s nearest challengers are now Leeds Beckett University following their scintillating display against the University of Exeter. Kerry Wood’s men thrashed the injury-hit domestic holders 50-15 to secure their third win on the bounce.

Statement has been made today at the cabbage patch. pic.twitter.com/c59BV6VdOY

Max Coyle (2), Will Lewin, Charlie Venables, Harry Robinson, Michael Etete, Nick Brown and Jarod Leat all crossed during a commanding display by Beckett. Exeter trailed by just seven points at the interval with Richard Capstick crossing for the Green and Whites, but they could only manage a Charlie Moore try in the second 40 as they suffered their third loss of the campaign.

Cardiff Met University also handed out a humbling 60-10 defeat and did so against South Wales rivals Swansea University. The visitors got off to the dream start as Lailand Gordon darted over in the corner, but the Archers roared back in some style.

Tom Pearson, Corey Lewis and Aled Ward all dotted down before the break and Met’s control on proceedings further intensified in the second period.

Russell Bennett quickly secured the bonus-point after oranges as he made it 29-5 before Olly Morris, Bailey Marshall-Telfer, Will Rigg and Zach Clow all touched down in a rampant second half display.

Will Barraclough did get one back for Swansea, but they had no answer to the Archers, who have now moved up to fourth place in the table.

Loughborough University’s recent upturn in form continued on Wednesday as they sealed a 40-14 win over Cardiff University. The Midlands side showed their immense power up front in the first period to lead 26-7 before scoring on two more occasions in the second-half.

Great performance from The Boro. Another 5 point match keeps our 4 game winning streak in BUCS going!

As for Cardiff, they have now lost their last nine matches and with their derby day clash at the Arms Park to come next week, the Red and Blacks will be keen to halt their slide before the turn of the year.

The pressure on Cardiff to stop the rot was increased further on Wednesday as Northumbria University recorded only their second win of the campaign as they beat the University of Bath 25-23.

The North-East outfit led 18-11 at the interval with Jonny Ashman grabbing a brace whilst Oscar Yandall kicked eight points.

Bath had gone over through Alex Nisbet and they were able to move ahead in this contest at STV as George Holroyd and Harlequins academy player Jack Kenningham both crossed.

However, they were pegged back as Callum Burke barged over to level the scores and Yandall’s extras nudged Northumbria in front. Bath did have their chances to snatch the victory with two late penalties, but both attempts sailed wide as the away side held on for a welcome win.

The University of Edinburgh’s grip on top spot in the Women’s National league was tightened on Wednesday as the Scottish outfit continued their faultless season. A 36-12 triumph over last year’s finalists Durham University means Edinburgh are now 10 points clear of second-placed Cardiff heading into 2020.

Nottingham Trent University do remain at the summit of Men’s Premier 1 - North, but their four-game winning run came to an end this week as they lost 21-19 away at Durham 2nds. Newcastle University were able to capitalise on their misfortune and the gap between the top two is now seven points after Darren Fearn’s charges beat the University of Nottingham 35-17 at Cochrane Park.

The North-East side also have a game in hand, but seven wins from their last eight matches has seen Newcastle really hit their stride.

The University of Birmingham’s hopes of challenging for top spot suffered another setback this week as a 35-12 loss against a rejuvenated University of Leeds means the Midlands institution are 14 points behind leaders Trent heading into the New Year.

Meanwhile, the University of Edinburgh eased any possible relegation nerves before the Christmas break with a 38-15 win over Loughborough 2nds.

Over in the south, Hartpury 2nds on top of the pile after thrashing Bath 2nds 64-0. This was the perfect response by the Gloucestershire outfit after a surprise defeat to St Mary’s last time out and their victory tasted even sweeter as rivals Exeter 2nds lost 24-21 away at Cardiff 2nds.

St Mary’s University were able to build on their excellent win over the aforementioned Hartpury 2nds as Pete Richards and James Brookes’ side beat Cardiff Met 2nds 26-22. Their latest victory has moved them up to fourth spot and they have the chance to close in on the bronze medal position when they take on the University of Bristol next week.

Leeds Beckett 2nds ended their fixtures for 2019 with a sixth straight win in Premier 2 - North. The Yorkshire club defeated Bishop Burton 26-22, but Manchester Met continue to be in hot pursuit as they remain three points off the top.

Rob Jones’ side beat the University of Strathclyde 38-22 to extend their winning streak to three matches and with MMU having to play the University of Sheffield next week, the North-West club could be top of the tree over the festive period.

Big one next week at home to Sheffield Uni pic.twitter.com/FGqYQZXsdI

Like MMU, Sheffield have also picked up a hat-trick wins with their latest triumph being a 27-10 victory over the University of Glasgow. The Steel City side are only a point behind MMU with a game in hand so the situation at the summit of the division is becoming increasingly intriguing.

In the South section, Hartpury 3rds thrashed the University of Gloucestershire 41-25 to extended their winning streak to three matches whilst elsewhere, UWE are up to third after edging out the University of Brighton 23-20 to earn back-to-back wins for the first time this term.