Derby day was always a highlight for Dombrandt 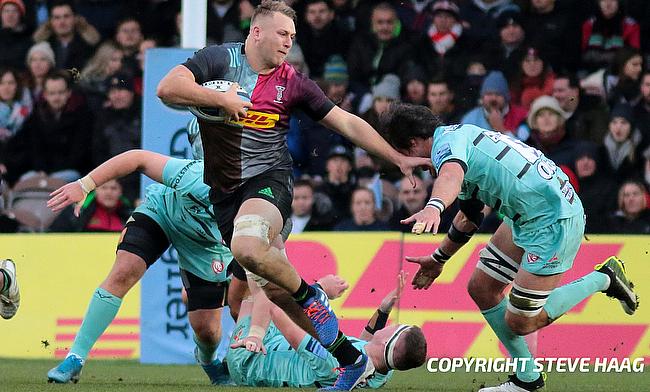 Alex Dombrandt’s rise has been well documented by many media outlets over the last 18 months and his phenomenal progress was once again on display on Sunday.

We witnessed the 22-year-old’s supreme ball carrying skills and power at the Stoop as Harlequins returned to winning ways in the Gallagher Premiership against Gloucester.

Dombrandt, himself, was influential after his comeback from injury as he added another try to his tally in the colours of Quins.

Last year, the former Cardiff Met man was graduating from university, but the Archers have never left the thoughts of Dombrandt since his move down to London. This week, he will have a close eye on proceedings in the Welsh capital as Dombrandt’s former institution host rivals Swansea in BUCS Super Rugby.

During his time at Met, Dombrandt tasted the ‘derby day’ experience against Cardiff University and the forward believes Danny Milton’s current crop of players will be feeling the emotion and excitement ahead of Wednesday night’s clash.

“A derby is definitely one where you look at the fixture list at the start of the season and note it down in the diary!,” Dombrandt told TRU. “These are the games where there is automatically a buzz around Uni because you know of the rivalry and I am sure the boys will definitely be looking forward to the game.

“It would be cliché for me to say every game is sort of the same, but that would be wrong of me because everyone knows on derby day, there is that different approach to it and that little bit more edge to the game.

“I am sure the boys will be very excited. I will be definitely watching and seeing how they get on.”

Dombrandt’s former side head into their first all-Welsh affair of the campaign in sixth place, three points and two places behind Swansea.

The Swans have made an instant impact in their debut BUCS Super Rugby season and they’ll be hoping to topple their South-Wales rivals to maintain their solid term thus far.

As for Dombrandt, he will be watching from the English capital as Quins prepare to head to Ireland to resume Heineken Champions Cup duties this weekend.

Paul Gustard’s men are preparing to face Ulster and they will arrive at the Kingspan Stadium off the back of two victories, including a 15-9 triumph in Europe against Bath.

Dombrandt’s first appearance for Quins came in the Challenge Cup in October 2018 and following his excellent performance last Sunday, he may well be involved in his first Champions Cup fixture this weekend especially after Gustard labelled his back-rower as a ‘champion’ whilst Danny Care also heaped praise on his teammate.

Don’t be fooled by his talk of a simple game. @Alex_dombrandt has one of the best rugby brains I’ve ever come across as well as a skill set to match! ?? https://t.co/g5Z8kBUJUC

On the victory against Gloucester, Dombrandt said: “I hadn’t been playing for a couple of weeks. I picked up a niggle here and there so it was my first game back after a few weeks. I really enjoyed it and the boys got a good win before in the European Cup against Bath so it was nice to come back to the Premiership and carry on the winning form.

“Obviously, for every player, you want to be involved all of the time, especially in the winning matches! It was great to be involved and it was a great victory to get it over the line at home as well.

“Players like Danny are players you look up to and that is the same with the coaches as well. My feet are firmly on the ground. The position I’m in, I understand areas I need to improve on and I am just trying to enjoy my rugby at the moment to make sure I just have a smile on my face! What will be in the future will be.”

Quins currently occupy third spot in Pool 3 of the Champions Cup and Dombrandt is fully aware of the threat Ulster will pose on Saturday, but admits he and his teammates are relishing challenge.

Dan McFarland’s men have won six of their last seven games in all competitions and they produced an excellent display on matchday two of the Champions Cup when they defeated Clermont.

Dombrandt added: “We worked really hard last year to get back into this competition and now we are here, we want to give it our best shot. Away to Ulster this week is going to be one of the toughest challenges in European Rugby, but the boys are looking forward to the challenge.

“Eighteen months ago, I was finishing up a University degree and I didn’t think I would be in this position now and talking about potentially playing Ulster away in the Champions Cup. Obviously, these are the games as players you want to be involved in and to maybe get the chance to play will be a big moment for me.”