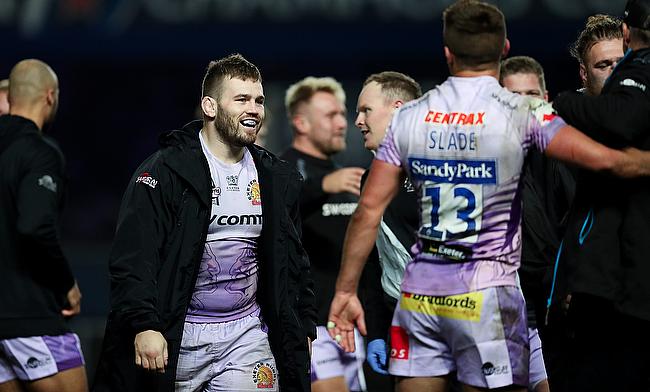 In one of his first exchanges with England head coach Eddie Jones, Luke Cowan-Dickie did what most of us would have done.

“I thanked him [when I saw them]” says the Exeter Chiefs man. “A pack of 24 Guinness’ for free mate? You can’t turn that down!”

In Jones’ autobiography, My Life and Rugby, he explains how he interacted with various members of his squad. In regards to Cowan-Dickie, the England boss said: “I heard Luke was a bit of drinker. When he walked in, I put a crate of beers on the table. He made me laugh because after we’d had our chat, he walked off with the beers.”

Cowan-Dickie’s version of events stack up with those of Jones’ and the 28-year-old took a lot from that moment. He explains how he saw the gesture not as a test, but more as a statement from his international coach. “I think it was just, in a nice way, him putting his foot down.”

In 2016, Jones brought the hooker off the bench in England’s final two matches as they clinched the Grand Slam in the Australian’s first Six Nations in charge, but it has been over the last four years where Cowan-Dickie’s stock has really risen.

Whilst climbing the ladder with England, Cowan-Dickie has also helped Exeter to domestic and European glory and last summer, he became a British and Irish Lion.

“To finish the tour with three Test caps, it was quite unbelievable,” he adds. “I think it shows you what type of player you are whereas beforehand, you may have thought you weren’t quite there. To come away with three caps, I think it puts it into perspective that you could be quite good and I feel like that has definitely given me a bit more confidence.”

This weekend, he will captain the Chiefs for their meeting with Montpellier in the Heineken Champions Cup before linking up with Jones again as England begin their preparations for the upcoming Six Nations.

If Cowan-Dickie is involved in their opener against Scotland on February 5th, it will be his first appearance for England in almost a year.

Last autumn, the Exeter forward missed the beginning of the ‘New England’ era due to an ankle injury and he watched on as Jamie Blamire came to the fore against Australia and South Africa in his absence.

“Obviously [the injury] was a little annoying,” he says. “Autumn would have been a good stepping stone for me to hopefully get some more game time in an England shirt and just be around the guys, so getting injured was obviously devastating.

“Partly I was upset because I knew I could have been there, could have been involved but seeing them win, seeing how they performed, it definitely looked like a new England team. I am well excited to get back involved and hopefully maybe get some game time.”

Despite the disappointment, Cowan-Dickie used the period away from the field to challenge and adapt his game even further.

“I was always carrying a bit of extra body fat,” he explains. “I like biscuits, I like chocolate, I like sweets. I like eating my little man’s leftovers for dinner which I have cut out quite a bit!

“I thought having time off, I could probably try and get into the best shape I could try and get in. I feel better on the pitch. I am still lighter, but trying to get a bit more powerful and being a bit lighter so I can obviously play more minutes.

“I probably feel more mobile. I feel like I am getting more contributions into the game. It’s just a change of how I am eating to training and the extras.”

That ‘change’ is a small insight into how Cowan-Dickie approaches rugby both on and off the field and the Chiefs hooker revealed how he now values time away from the pitch a lot more than he used to.

He adds: “I have grown up slightly and I am getting old! I think since I had my kid [things have changed]. The main thing that has probably affected it is just when I go home from the club, I can definitely switch off a lot more.

“You get your emotion built up so much before a game especially for an international or big European games, or big Prem games, finals. You don’t go home dwelling on it. You’re not thinking about it over the next week because you haven’t got time to do that.

“I go home and I have to look after my little man and it completely shuts you off. I think it puts life into perspective. Rugby is not the be-all and end-all. Obviously, it is a massive part of my life, but I have got a family at home that I just need to look after.”

Cowan-Dickie’s partner, Chloe Rose, and son Arlo will no doubt be cheering him over the next two months as England look to build on a positive conclusion to 2021 but before his focus turns to the international scene, the 28-year-old wants to help Exeter continue their recent improvements.

After a spluttering start to the campaign, Rob Baxter’s charges seem rejuvenated and are slowly morphing back into the cohesive unit that clinched the league and European double in 2020.

Last week’s thumping win of Glasgow Warriors was arguably the clearest indication of that and after going a season without collecting silverware, Cowan-Dickie hopes the second half of this campaign can be a fruitful one for the Chiefs.

“It is always going to be devastating going from the double to not winning a trophy at all,” he says. The boys are a bit annoyed about last season. We got to the [Premiership] final against Quins and we feel like we didn’t put our best foot forward so this season, you have seen glimmers of us trying and I think we are overtrying and that is where the consistency is not coming from.

“We have had a few meetings over the last few weeks and I think we are just going to try and go out and enjoy our rugby at the moment. The boys definitely enjoyed the weekend so hopefully this is the start of a good end to the season.

“The thing of not winning a trophy last season, we are trying to put to bed and I feel like now boys are enjoying their rugby again. We’re not thinking about the past. We are just thinking about what is coming up.”