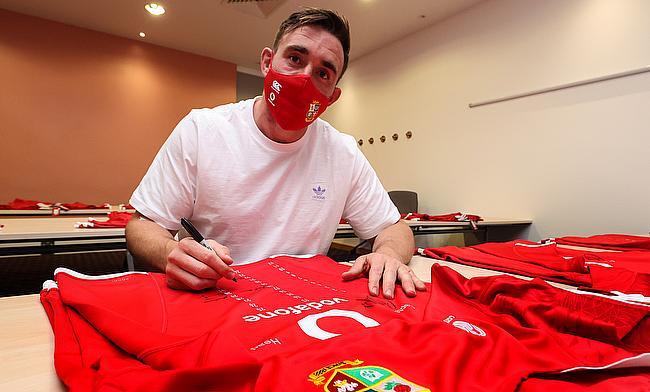 Four years have passed since Jack Conan’s career as an international No.8 truly began.

Whilst the British and Irish Lions were touring New Zealand in 2017, the now 28-year-old was earning just his second cap for Ireland, his first at the base of the scrum, against the USA.

Fast-forward to the present day and Conan was coolness personified when he fielded questions from the press ahead of the British and Irish Lions’ second Test against South Africa.

In the first, enthralling battle with the world champions, the back-rower produced an extremely efficient performance and Warren Gatland’s leading carrier [12] from last weekend will line up in the No.8 jersey once again alongside the impressive Courtney Lawes and Tom Curry.

The calm aura which Conan displayed during his media session was something which Gatland witnessed in the lead up to the first Test as the Ireland international focused on the task in hand to help the Lions get over the line in Cape Town.

“Last week, being able to prep for the whole week and not having a Wednesday-Saturday fixture with those short turnarounds, I was pretty nervous on Monday and Tuesday early on, but then we got out and trained. I trained well and I took a lot of confidence from it.

“Come Saturday, I was just ready to go. I thought to myself, ‘this is it, this is going to be the moment, there’s no point being nervous, you’ve just got to go out there and be physical’ and I loved it out there, I really did.

“It was hugely enjoyable and to come out on the right side of a performance was great and I am looking forward to doing the same again.”

For now, Conan's ascendancy is keeping Taulupe Faletau and Sam Simmonds at bay, but Gatland’s praise for the No.8’s error-free performance shows how highly he rates the Leinster forward.

“At this level, it’s just about doing the basics really, really well and being consistent,” Conan added. “It’s great to hear those words from Gats, but if I do go out and make a mistake, I’m kind of at peace with it now.

“It’s just part of the game so if I go out and make one or two this weekend, I won’t be kicking myself. It’s just about not backing that up with another mistake, getting on with the job, and being the player the team needs me to be."

Gatland has opted to stick with his back-row combination for the second Test against the Springboks and Conan also described Lions teammate Curry as a ‘complete freak’ following his own rip-roaring performance in the opening clash with South Africa.

Conan added: “Tom is a complete freak. His work rate and energy around the park, he is the lad who leads the team. He’s excited to go again and have another big performance at the weekend. He’s 100 miles an hour in everything he does and he has an incredible engine.

“I’m shocked about his repeatability. That ability to get up and keep on going and keep on leading the line and putting in great defensive shots. Then he’s obviously very smart on the ball as well.

“He’s a joy to play with and be on the same side as because you know what you’re going to get with him every time and you know that his work rate is going to be the highest on the pitch.

"To be fair to those two lads [Curry and Lawes], they are two incredible players. Courtney is a freak athlete. For a man of his size to move as well as he does is not something I have ever seen before and his ability to beat defenders and throw passes, offloads and those little tip-passes is top notch."

??“They are going to be desperate, aren’t they?”

Announcing his squad for a potentially decisive second Test in Cape Town, read what Warren Gatland had to say about what he is hoping for on Saturday evening??

The Lions are now on the verge of securing their first series win in South Africa since 1997 and for Conan, the second Test in Cape Town could well be the biggest game in his career.

He could be forgiven if he was experiencing butterflies this week as the chance to become a series-winning Lion is often a once in a lifetime opportunity, but Conan is fully aware they can’t get too far ahead of themselves despite a new piece of history being tantalising close.

“All I’m thinking about is just doing my job to the best of my ability, making life for the lads around me that bit easier by doing what I’ve been told to do, what I am good at, to my absolute utmost,” Conan said.

“So these big games, it’s not about going out there and doing the flashy things or having big moments. It’s just about being consistent in everything you do and making sure that mistakes are low and you’re nailed on with your job.

“If anything, there is probably even more pressure this week to back up the performance of last weekend and go out there and get another victory and finish off this series within two weeks.”