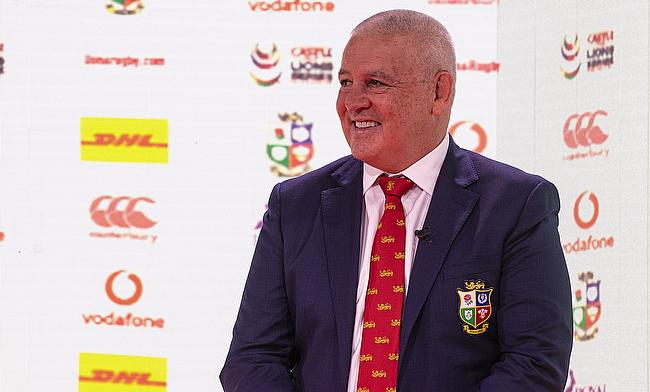 “I just think it is a bit of a separate sideshow, isn’t it?” Warren Gatland purred when asked on his thoughts on the ensuing drama around a Twitter account many believe is being run by South Africa’s Director of Rugby, Rassie Erasmus.

“I haven’t really taken too much notice of it. The focus has been on ourselves, and just letting that happen outside. We haven’t really been looking at that sort of stuff. We have heard the stories.

“I am just trying to stay out of that stuff, I’m not on social media and I haven’t really taken too much notice of it.”

All of this conversation has come in the aftermath of the Lions’ win in the first Test, Erasmus retweeting an account with zero followers, but still had access to high quality footage, similar to what the former Munster coach has used to berate the tourists, posting various incidents, even accusing Mako Vunipola of a ‘dangerous' challenge on Cheslin Kolbe.

Claiming the user is in fact a ‘big supporter’ and ‘a really funny guy’, the saga of the ‘burner account’ has been light relief in the middle of a highly contested Test series.

All of these things have added up to the suggestion that Erasmus and the Boks are running scared of the Lions, the same accusation thrown at the touring side after they refused a second encounter with the South Africa A side.

“They are going to be desperate, aren’t they?” Gatland said. “They want to desperately stay in the series, and we have got the chance of winning this series on Saturday and I have spoken to the players about that.

“We have just got to make sure that we are mentally right, because you don’t want to be using your get out of jail free card, which is going to the third test.

“You have got to make the most of the opportunity that we have created in winning the first test and hopefully trying to seal a series victory on Saturday.”

After one game, the Lions have the advantage thanks to their 17-22 victory in Cape Town and Gatland has made three changes to his starting side.

These alterations see Mako Vunipola get a starting berth at tighthead prop, something of a leap for the England man, who wasn’t even in the squad last week, but after injury to Wyn Jones and a good showing from the bench, the 30-year-old swapping places with Sutherland who started last time out.

Conor Murray trades places with Ali Price, whilst Chris Harris comes into the squad in order to start at outside centre. Elliot Daly, in turn, moves to the bench, where Taulupe Faletau has come in for Hamish Watson.

In what was a game of two halves at Cape Town Stadium last Saturday, the Lions overcame their early ill-discipline and 12-3 half-time deficit, Gatland was very pleased with his team’s performance in the first game.

“We gave away a number of penalties in that first half and in the second half we were much more disciplined,” Gatland said. “We were pleased with our control of the game; we only gave them four lineouts in the game.

“We probably, at times, put ourselves under a bit of pressure by shipping the ball on occasion, being caught behind the gain line and allowing them to get some breakdown turnovers.”

Making his Test debut on Saturday will be Scotland international, Chris Harris. From England Counties XV to the Lions, it has been one hell of a journey for the man who now calls Gloucester home and will be forming a formidable partnership with Robbie Henshaw.

Having watched from the stands last weekend, Harris echoes the sentiments of his head coach that by cutting out early errors, the chances of winning improve.

“That sort of first 20, 30 minutes or whatever it was, we gifted them 12 points,” Harris said. “Our discipline across the whole game was actually really good, but if we can sort of take that away and reduce that to half of what we did, then we stand an even better chance of coming away with a victory.”

Replacing Elliot Daly at outside centre, his English counterpart not having his best performance on the rugby field, it is clear that Gatland has adjusted his game plan slightly. In Henshaw and Harris, the Lions are going like for like with the Springboks’ Lukhanyo Am and Damian de Allende, the pair only lacking with their ability from the boot.

Now the dust has settled on Gats' squad selection, @joeharvey34 and @c_heal will be previewing the second Test on TRU's Instagram tomorrow at 12pm.https://t.co/iMebgOJ8EE

Each of Murray, Dan Biggar and Stuart Hogg will provide the kicking threats, Harris more than aware of the opportunity that has presented itself to him and has the support of the man he has displaced to the replacements.

“Pressure is a privilege, isn’t it?” Harris continued. “It is an opportunity for me to go out there and really show what I am about and just contribute to the team and hopefully do that in a good way and come away with another win.

“He (Daly) was the first to congratulate me. It was a similar thing for me last week, when the team was named. I wasn’t names in the squad at all and I felt really deflated, so it is just part of professional sport, it is part of this environment.

Talking Rugby Union’s Joe Harvey and Chris Heal will be live on Instagram tomorrow at noon to preview the second Test between the British and Irish Lions and South Africa.