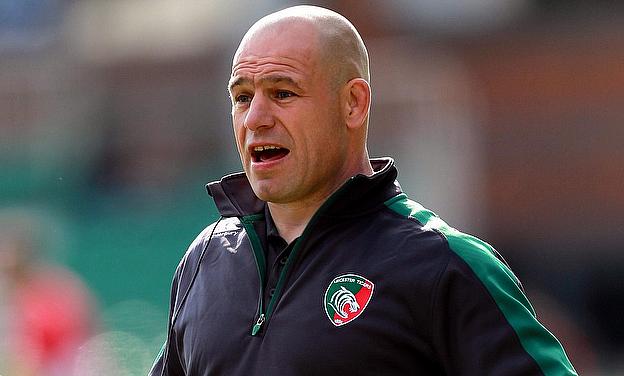 The Tigers tackle Saracens at Allianz Park on Saturday, separated by just two points and two places with only four games left.

While Northampton are clear at the top, it is a different story for the three remaining play-off positions, with Saracens, Bath, Leicester and Exeter all bunched up behind Saints, and mid-table Wasps and Sale Sharks also cannot be discounted.

The 22-game Premiership campaign concludes on May 16, with play-offs a week later, and the stakes are high.

"We've got some tough games coming up, but we are up there in the mix," said Tigers rugby director Cockerill, whose team's run-in features appointments with Saracens, London Welsh, Wasps and Northampton.

"The top four was our target at the start of the season, and that is still our target now, but we have to keep going.

"With being out of Europe, we brought our internationals straight back into the squad against Exeter (two weeks ago) because we knew they could have some down-time after that.

"All of the top five or six clubs have some tricky games in the run-in. We all play each other at some point, too, and it will go to the last weekend for everybody.

"This is a really big game for both teams on Saturday, with just four rounds of fixtures left in the season.

"It is a tough place to go, and Saracens are a consistently good team who come into this weekend on the back of a European Champions Cup quarter-final win.

"But we've come into some form, and we want to maintain that through to the end of the season and see where that takes us."

Saracens, fresh from a dramatic 12-11 win against Racing Metro in Paris last Sunday, are buoyed by the return of fit-again England centre Brad Barritt, while Kelly Brown replaces flanker Jacques Burger, who is serving a one-week ban.

While Saracens and Leicester scrap for crucial points at the Premiership's business-end, Harlequins and Gloucester meet in south-west London on Saturday with both sides reflecting on frustrating seasons.

Quins lie eighth and Gloucester ninth, although the west country club still have hopes of silverware, having reached the European Challenge Cup semi-finals by beating Connacht seven days ago.

"We've been a little bit inconsistent, a bit up and down," Gloucester backs coach Nick Walshe said.

"Northampton was a great performance, Sale was very poor, Connacht was a good performance. We want to try and get that consistency.

"Quins attack very well, they offload a lot, they carry a lot, so we have to concentrate in defence, but also in attack, because we want to play well and cause them problems."

The Saints, eager to bounce back from their Champions Cup quarter-final drubbing against French heavyweights Clermont Auvergne last weekend, will also be looking to avenge a 24-18 defeat to Exeter at Franklin's Gardens earlier this season.

Exeter will be without Scotland international prop Moray Low, who suffered a hamstring injury during the Challenge Cup quarter-final win against Newcastle six days ago and is unlikely to play again this term.

"We've had the results of the scan back on Moray, and he has got quite a significant hamstring injury," Exeter head coach Rob Baxter said.

"It's going to be unlikely that he will feature again this season, which is very unfortunate for Moray.

"He will start on his rehab programme, and we will work very hard on that and get him fit and running around as soon as possible."

Elsewhere on Sunday, Wasps will be widely expected to claim a five-point maximum against hapless Kassam Stadium hosts London Welsh, and Sale need victory over London Irish at the Madejski Stadium as they pursue a top-six finish.