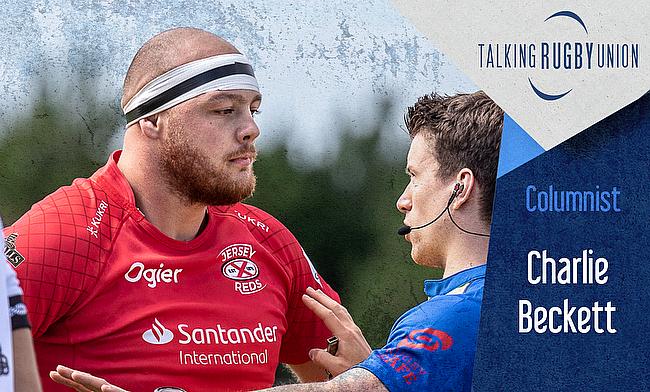 In his latest TRU column, Charlie Beckett reveals why Lewis Ludlam has a scar on his cheek, why aliens must watch Japan at this World Cup and he also discusses a big weekend for Jersey Reds.

The Rugby World Cup group stages have come to an end and there is a lot to talk about! In all seriousness, where do we start?

Is it with the incredible rise of Japan? Uruguay’s shock victory over Fiji? Scotland crashing out and not making the quarter finals? The number of red cards there have been for high tackles? Or with the typhoon that caused the cancellation of a number of group games?

The answer is in fact, none of the above. The answer, is Lewis Ludlam’s left cheek...

If you look at Lewis’ left cheek, you will see that just below his eye, there is a small scar. Most people won’t realise it’s there, but I am fully aware of its existence, because, it was indeed myself who put it there.

What a moment this is for Lewis Ludlam!

The incident in question occurred in an U18s match at Welford Road between Leicester and Northampton when a young Mr Ludlam and a young Mr Beckett had a ‘disagreement’ over whether he was legally jackling for the ball in a breakdown.

Despite his cut, Luds (who is now a close friend of mine) battled on for the remainder of the game and I like to think that said ‘disagreement’ and said scar instilled a drive and determination in him, and while I’m not saying that without me he wouldn’t have made it into the World Cup squad, what I am saying, is, that if it wasn’t for me and that scar, he would have found it a lot more difficult...

Looking elsewhere in the World Cup though, I just want to take a moment to talk about Japan. It’s truly been a pleasure to watch them so far in this tournament. The speed and intensity at which they play, both in defence and attack is a sight to behold. They are obviously supremely fit and their skill set from 1-15 I truly think can only be matched by The All Blacks.

That try they scored under the posts against Scotland for example, I think the ball went through five pairs of hands, in four tackles without there being a single ruck.  Their offloading was phenomenal. If aliens landed on planet Earth tomorrow and you wanted to show them how rugby should be played, I truly believe you would show them this Japanese team at this World Cup.

With the whole country behind them, I wouldn’t be surprised if we see a repeat of Brighton 2015 this weekend and they get a win vs The Springboks, and if that happens, who knows how far they could go?

Another hot topic I just quickly want to touch on is the high tackle. We’ve seen a lot of penalties, yellow and red cards awarded for high tackles at this World Cup and it’s been hugely debated both by players and coaches, as well as in the media. My take on it, for what’s its worth, is this. Whether you agree or disagree with the new adaptations to the high tackle law it doesn’t matter because they are here to stay, so it is up to us as players to adapt to the laws and play to them.

Bundee Aki is off.

Direct contact from his shoulder to the head of Leiua 'with a high degree of force'.

"Perfectly correct. The course of this game has changed." - Shane Horgan pic.twitter.com/xYhe1Ez8BL

What we need from officials is consistency in how the laws are refereed. For me personally, the frustration comes when one referee is giving a red card and another referee is only awarding a penalty for two separate incidents which are very similar, if not the same.

However, as this World Cup has progressed, I do think the officiating has, on the whole, been consistent around the high tackle and that has meant for better games and less drama around the issue. Also, these laws are in place to protect us players and to try and minimise the risk of concussions and head injuries in our sport, and that can only be a good thing!

This quarter final weekend is going to be one to savour. All four games have the potential to be absolute crackers. I have to say, I think England will beat Australia and New Zealand will beat Ireland, but the other two matches I’m really struggling to call.

I’ve already spoken about why I potentially fancy Japan, although I do think they will need South Africa to be significantly below par if they are to cause another upset.

The Wales vs France game is the one I really, really can’t predict. The French have been at their mercurial best, and their mercurial worst throughout the tournament and without sounding like every cliché rugby fan in history, I truly do believe it depends on which France turns up on the day.

I still think New Zealand are favourites for the tournament as a whole but while saying that, if anyone is going to beat them, I think it will be England, this is our best chance at bringing The Webb Ellis trophy home since 2003!

Let’s have a look at how we’ve started our season over at the Jersey Reds.

To be honest with you folks, it’s been mixed. We had a tough loss to Newcastle on the first day of the season. We lost 21-8 and gave a good showing of ourselves against a side made up mainly of Premiership calibre players, but in review, we let ourselves down at a few pivotal moments in the game.

If we hadn’t, we potentially could have secured a better result from that match and begun the season strongly. We then followed that loss in the cup with two more cup games. The first was a good bonus point win away at Hartpury and the second was a very frustrating loss away at Doncaster. Again, there were a lot of positives to take from the game, but ultimately, we shot ourselves in the foot with our discipline and that cost us the match.

After the three cup games, all eyes turned to the league and the visit of Coventry to Stade Santander on opening day.

Great to get the league season started with a bonus point win at The Stade ???? https://t.co/1lxg3rypQj

Coventry have invested heavily in the off season and recruited well, bringing in some very talented players such as Luke Wallace, Ryan Burrows and Rory Jennings. We were expecting a very tough and physical game from Coventry, and they did not disappoint. However, Harvey and our coaching staff put together a very good game plan for us and we executed it well winning the game 22-15.

What was particularly pleasing for us though was that we didn’t let Coventry score a single try in the game. We pride ourselves on our defence at Jersey and work very hard on it in training, so it is nice to see the rewards on the pitch.

The tough games don’t stop in this league though, and this weekend we travel to Vallis Way to take on Ealing. I said in my last column that I think this squad is their strongest to date and on their 4G pitch, they are a formidable prospect. It will be another tough day at the office but the tough games are always the most enjoyable and why we all play this sport we love, so I know the boys are all chomping at the bit and can’t wait for Saturday!

In summary, both Jersey Reds and the mighty red men (Liverpool FC) have 100% winning records in their respective leagues so far this season, so everything is rosy in the world of Charlie Beckett!

Enjoy the World Cup knock out stages everyone, fingers crossed the boys can bring it home to England, oh, and as ever... COME ON YOU REDS!