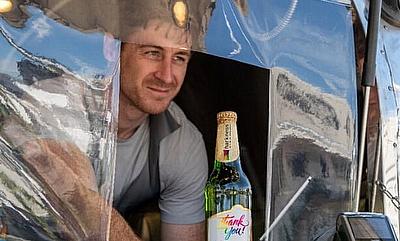 Ollie Stedman: Rugby at a full-time level could be done
RFU CEO Bill Sweeney: For me, the community game, it is more than a game
The roadmap for a return: How university teams are dealing with the coronavirus crisis
New NCA Chairman John Inverdale: We want to broaden the appeal of the National Leagues

Harkness Screens is a 90 year old cinema screen manufacturer based across the world.

Lockdown procedures of course mean that cinemas are closed for the foreseeable future. As a result, the company has turned to the production of Personal Protective Equipment (PPE) to help those on the frontline and to aid companies with their restart efforts.

Talking Rugby Union too believes that their innovations have a standing with your community rugby club as clubhouses across the country reopen as a way to generate revenues for the clubs after being shut for extended periods of time.

Providing faceshields, aprons and barrier screens, all of these products have a standing for the reopening of a clubhouse or rugby facility.

Faceshields may be worn by those who are in contact with the general public, working behind the bar and in the kitchen. Aprons too have the same application and are heave duty, due to being made from PVC and can be wiped down for reuse the next day.

Barrier have a number of applications in the clubhouse environment. Capable to be custom fitted to their environments or be made into panel-style barriers, the range is extremely adaptable to the customers needs.

Robert ‘Blandy’ Bland used to be the Red Panda 7s physio, but now runs London’s number one ranked restaurant, Barge East. In a recent interview on Harkness Screens’ website, Bland said that his business would have been unable to restart if it weren’t for Harkness Screens.

“Because of the screen (floating barrier screens), we have been able to open up earlier than planned,” Bland said. “We have been able to bring our staff back from furlough. They are now earning their full wage again, but in a safe environment, so that’s amazing for us, just to be able to start trading again.

“Many business’ have had no option but to close completely during the coronavirus pandemic, whilst others have adapted quickly through change and innovation. The Harkness Group is a great example of this. They changed what they do to help other businesses, which is a testament to them.”

Harkness Screens CEO, Mark Ashcroft, believes that the innovative uses of cinema technology can offer something to rugby clubs too, having been involved heavily with the game at the community level.

“I have followed my son home and away for many years now and as a result I have seen the tremendous efforts of clubs to make a cold, wet day on the sidelines bearable,” Ashcroft said. “That is through the pre-match meals, the kiosks with tea and sausage sandwiches to keep you going for what can be a long day, especially if your team is losing.

“I recognise how important it is for these clubs to reopen safely and I believe that our innovations can aid with that. It is understandable that many will have a sense of trepidation going back to these spaces, but simple things like a faceshield and floating barriers reduce the chance of infection hugely and can help clubs start making money again after four months in moth balls.”

To learn how Harkness Screens can aid your sports club, email joe@talkingrugbyunion.co.uk.