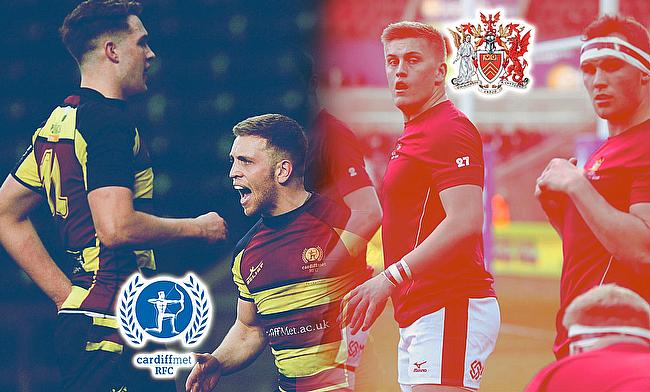 Cardiff is in the BUCS Super Rugby spotlight this week

The rivalry between Cardiff Met University and Cardiff University takes centre stage in Round Two of BUCS Super Rugby as both Welsh institutions collide at Arms Park.

Wednesday night’s game will round off an all-day festival of rugby in South Wales with both universities bidding for the bragging rights at the beginning of the new campaign.

Cardiff Met and Cardiff University are separated by just three miles and after the latter gained promotion from South A last year, both are now competing at the highest level of university rugby.

Last week, Cardiff Uni begun their maiden season in BUCS Super Rugby with a defeat against current champions Hartpury, but despite suffering a 31-14 loss, Director of Rugby Alun Wyn Davies was encouraged by his side’s opening display.

“We were really pleased for 55-60 minutes,” he told TRU. “I think the game was in our hands. We matched the intensity we were striving for because making that step up, you need to sustain that intensity and our guys haven’t been used to that so I thought they did very well.

“There was an element of disappointment from the players at the end of the game which was fantastic because I don’t think the score reflected the game at all, but it is one of those things and credit must go to Hartpury for being clinical.

“We have said for the last three or four weeks, an aeroplane doesn’t take off vertically. We are on the runaway and it is going to take us a couple of weeks to get used to the intensity level, but I was massively proud of the guys.

“I watched the analysis back and it is lovely to think that we aren’t here to make up the numbers and the boys have responded to what we have said. We are here to compete.”

Cardiff Uni clinched their place in BUCS Super Rugby after a play-off win against Newcastle University back in March and with the introduction of relegation this season, Davies agrees it was important for his team to put in a positive performance last week.

Leeds Beckett and Nottingham Trent are the two clubs who have finished bottom of the division over the last couple of years and between the pair, they only managed two domestic wins from 30 matches.

A similar fate for Cardiff would see them demoted from the top tier, but Davies is confident that if his newly-promoted side can reach their targets, they can perform to their best level.

He added: “We spoke about hitting our KPIs [Key Performance Indicators.] If we can hit those at the percentage levels that we expect, then we should get the results.

“The performance against Hartpury was massively important. From a personal perspective, it was more important for our guys to realise it is a step up, but we have got the players and calibre to get through it.

“We have ticked boxes across what we want to achieve after week one, but we have also got a lot to work on.”

After beginning the new campaign with a fixture against holders Hartpury, Cardiff will not only face their near neighbours in Round Two, but they will be taking on last year’s runners-up in Cardiff Met.

The battle for Cardiff is LIVE online this Wednesday ??

Met had an outstanding term in 2017/18 and made it all the way to the Twickenham final after finishing seventh the season before.

Defeat to Hartpury back in April would have been tough to take for the Archers, but Director of Rugby Danny Milton is hoping his side can build on an extremely strong 12 months.

“We were really pleased with how the boys performed throughout the season,” said Milton. “The work and the effort they put into the programme, alongside the support staff, was fantastic last year.

“We definitely would have been seen as a surprise package and I suppose we have lost that underdog status now and that is a challenge we are looking forward to.

“Whatever happens this year, what we want to strive to do is try and create the same atmosphere around the group and try and focus on the same things so we can be successful again.”

Met weren’t in action in Round One so their BUCS Super Rugby season kicks off under the lights at Cardiff Arms Park.

Three of last year’s top four – Hartpury, University of Exeter and Northumbria University – all opened their accounts with victories last week and Milton wasn’t surprised to see these particular institutions begin on a positive note.

He said: “It is always an exciting time of the year and we are desperate to get going!

“It is always tough at the start of the season to get a feel for where everyone is at. I think it will take a few weeks for that to settle down, but Exeter’s performance against a strong Leeds Beckett side looked a particularly good result.

“For Northumbria, travelling north to south is always difficult so to see them get over the line against Bath was another good result. You’d expect Hartpury to give Cardiff a tough time, but Cardiff were leading 7-3 at half-time so that was obviously a close one as well.”

Attention now turns to this derby clash and all eyes will be on this BUCS Super Rugby contest.

With a packed crowd expected at Cardiff Arms Park, both camps are equally as excited heading into what is expected to be a cracking encounter.

“The game with Cardiff Met is always interesting,” Wyn Davies. “I’m an ex-Archer myself!

“They put a massive showcase on and it is on the back of the Blues Cup so all our squads will be playing before us as a curtain raiser.

“We are going into the game with eyes wide open and our eyes bright. Having the ‘W’ would be great, but we are looking at the bigger picture here. If we hit our KPIs then, like I said, we are putting ourselves in a good position to win the game.”

“Nobody wants to be the second-best university side in Cardiff, never mind the UK, so there is a lot riding on it for everyone in terms of the bragging rights for the year. We are not going to hide behind that!

“We played Cardiff in pre-season and if they can get their best team out on the field, they are going to be a tough side.

“They have a strong pack and have some good pedigree in the back line so we are under no illusions. We know it is going to be a titanic battle and we won’t underestimate them.”

Also, in Round Two of BUCS Super Rugby, Exeter go to Loughborough on Wednesday while on Friday night, Hartpury travel to Northumbria, Durham University host the University of Bath and Leeds Beckett face Nottingham Trent.

Dont forget, some of our other featured BUCS leagues also get underway this week so stay tuned to TRU for all the latest #unirugby news.