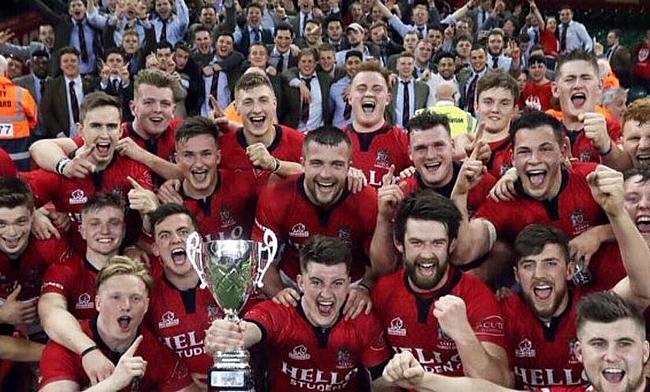 Alex Dombrandt: My time at Cardiff Met made ‘perfect’ move to Harlequins happen
Hartpury go fourth but Beckett respond
'That is what is really unique about Edinburgh'
Tom Lawday on the benefits of BUCS Super Rugby and why it helped him on his way to Exeter Chiefs

The South A side go into Wednesday afternoon’s second leg against Newcastle University at Kingston Park with a 59-17 lead, but the Director of Rugby is adamant that his team cannot lose their focus.

Davies expects a response from the North A runners up after a commanding performance last week and he is keen for Cardiff just to concentrate on their own display.

Penalty try finished the game. Final score is 59-17 to Cardiff against @NewcastleUniRFC. Hell of a performance and it’s all set for a great second leg #BUCSSuperRugby

“Wednesday will be a different challenge all together after the way we played last week,” Davies said.

“I was pleased and I am quite difficult to please! The guys executed the game plan well.

“I’m expecting a reaction from them. A wounded animal is a dangerous thing and that is what we will get up there. It is a difficult one for us because we are going up with a 40-point aggregate buffer so we just have to concentrate on ourselves.

“I think Newcastle will play expansively and roll the dice because they need to score and that could benefit us if they try things in the wrong area, but they are levelled headed and a good side.

“We cannot be complacent because it is the cancer of any team. We just need to focus on our task in hand.”

Cardiff University have a real opportunity to clinch promotion to BUCS Super Rugby after two years in South A and Davies has revealed the changes which have occurred behind the scenes in order to make the Welsh outfit a successful side.

“We changed a lot of things at the club to focus on a sustainable performance pathway and we feel we are on the way to doing that,” added Davies. “That has had a direct impact on our performance on the pitch.

“Our second team was like the ugly stepsister because none of the guys wanted to go into it last season, so what we have done is create an inclusive senior squad of around 45 lads who work together each week.

“We also have an academy team which is made up of our freshers and we have entered that team into a Welsh U18 league. That means players develop and in turn, everything has become more competitive and it is exactly the model we want moving forward.

“The likes of Exeter, Loughborough, Hartpury and Durham are all benefitting from this type of model because it drives the level of performance up and that is key if you want to take the next step to BUCS Super Rugby.

“The RFU do help those teams improve because I think they see it as a better pathway then the A-Leagues and even academies so I think the WRU need to realise that too. Hopefully that will improve, but for now, I am pleased we are still heading in the right direction.”

Another #bucswednesday and a special shout this week to @CUFencing and Swimming and Water Polo in #BUCSBigWednesday semi final action! @CardiffUni_RFC have a long trip north to @NewcastleUniRFC in @BUCSsuperrugby play offs! Good luck guys! ?? ????‍?? ??

And the next step forward for Cardiff could well be BUCS Super Rugby and after a season of 13 wins from 15 matches, another victory to add to their tally would be a landmark result in their recent history.

Davies added: “From our perspective, it is a bit of a cliché with what the All Blacks say about leaving a legacy, but you are only at university for a short amount of time and we always talk about leaving things in a better place so the opportunity the guys have on Wednesday is a good one. To go to the Super League would be a great honour for them.”