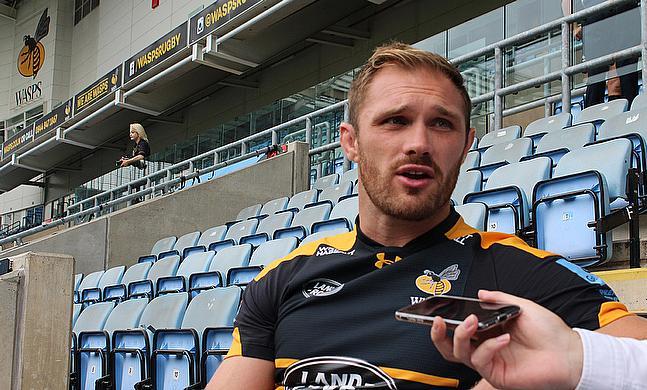 Joe Atkinson has started both of Wasps' opening games this season.
©TRU

Wasps’ Joe Atkinson spoke to TRU about the importance of his time at Loughborough University and the positive beginning to his Premiership career.

The 26-year-old has started both of Wasps’ opening two fixtures this term against Worcester Warriors and Exeter Chiefs after joining from London Scottish in the summer.

Atkinson has hit the ground running at the Ricoh, but his journey to the Premiership began at Loughborough University after suffering a setback early in his career.

Speaking to TRU, the back-rower said: “I went to university. I didn’t get my academy contract when I was at London Irish which was tough, so I went down the university route with Loughborough.

As a Loughborough player, Atkinson played BUCS rugby, represented England Students and also achieved promotion with their National League side before grabbing the attention of Championship outfit Cornish Pirates.

Rugby in the North East of England is certainly on the up and the thriving link between @FalconsRugby and their local @BUCSsuperrugby clubs is only adding to the positivity.... #GallagherPrem #unirugby pic.twitter.com/R81pe909Jr

Atkinson is just one of many current Gallagher Premiership players who have taken the university route to progress their career and with a number of younger athletes flourishing in the spotlight of BUCS Super Rugby, he believes studying and playing a high level of rugby is a perfect combination.

He added: “A lot of clubs like to make sure the players have got something outside of rugby to fall back on. Rugby doesn’t go on forever and it is not something that sets you up for life so you have got to have a backup so a university degree as well as playing good quality rugby is a step forward.”

Atkinson is now hoping his own rugby journey can continue on an upward trajectory. He was one of a handful of signings from the Championship in the off-season to move to the Ricoh and having being thrown straight into the starting XV, the flanker is excited for his future at Wasps.

“It’s been a massive step up, but I’m enjoying it”, he said. “There is a lot of talent in the Championship so it is just good to see the Premiership clubs look to the Champ to help the progression of a few of the lads.

“In the back row, I have got the likes of Nathan Hughes, Nizaam Carr and Ashley Johnson to look at as well as Thomas Young. They are all top players so I’ve got so much talent around me to learn from.

“I just want to do whatever I can for the team. I want to be playing as much as I can but it’s about continuing to up my game. I am constantly learning and getting better so I’ve got to keep on that upwards curve.”

??WATCH New signings @atko7 and @Searly10 look ahead to the @gallagheruk_ @premrugby Rugby game at the @RicohArena against Leicester Tigers.

Don't miss Joe, Billy and the team in action on Sunday. Get your tickets now from https://t.co/u0fvkrVdhn pic.twitter.com/Gk6sEskWGt

Wasps have begun the season with a narrow win over Worcester, but suffered a defeat in their first home game of the campaign against Exeter last Saturday.

Dai Young’s side host Leicester Tigers this weekend and Atkinson admitted Wasps are aiming for honours this term.

“We have been in the top four for the last few years, but now it is all about silverware. We need to get something on our mantlepiece.”