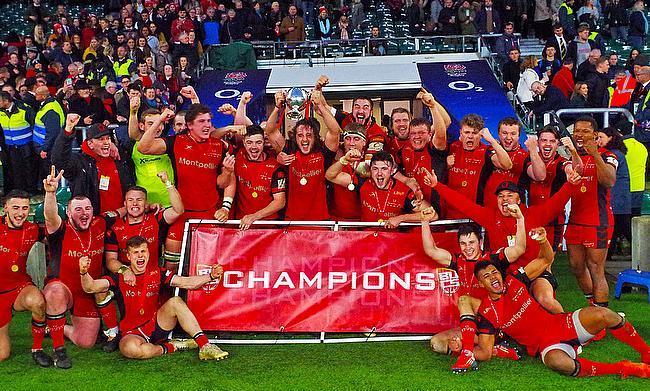 Should we expect another compelling season? If the last two years of BUCS Super Rugby are anything to go by, then prepare for drama throughout the 2018/19 campaign.

With Cardiff University arriving into BUCS Super Rugby as well as the new talent mixed together with quality players that have already cut their teeth at this level, we have all the ingredients for another exciting and unpredictable term.

The new season kicks-off on Wednesday afternoon with a Midlands derby as Nottingham Trent University host Loughborough University so let’s take a look at the 'Class of 2018/19'.

The University of Bath are heading into the new campaign looking to improve. Last year, Head of Rugby Aaron James insisted his side were the “architects of their own defeats” as the Blue and Golds ended the term with 11 losses to their name.

Bath will be fully aware that they to need progress this year if they are to take the next step in BUCS Super Rugby and with the likes of Tom Doughty and Alex Burrage in their ranks, they have the quality to really challenge this season.

Alun Wyn Davies will not tolerate any complacency from his @CardiffUni_RFC side as they aim for a place in #BUCSSuperRugby pic.twitter.com/7yX5gHtVsi

Cardiff University are entering BUCS Super Rugby ready to showcase their abilities and give the division a good crack.

Last year, we saw newly-promoted Nottingham Trent finish bottom of the table so this term, Cardiff will be hoping to avoid a similar fate in their maiden season at the top level.

The Welsh outfit were irresistible at times in South A last season as they picked up 12 wins from their 14 matches to secure the league title as well as a BUCS Super Rugby play-off spot.

Cardiff continued their fine form over two legs against Newcastle University (winning 87-34 on aggregate) to reach the top tier.

Wyn Davies’ side did go on to face Bath in the Championship Round of 16, losing 58-15, so can Cardiff handle the rip-roaring nature of BUCS Super Rugby?

I don’t even think losing in the BUCS Super Rugby Championship Final would have taken much gloss off an outstanding season for Cardiff Met.

Danny Milton’s side improved significantly from the inaugural BUCS Super Rugby season (where they finished in seventh place) to produce a major title challenge and come extremely close to Twickenham glory.

After fighting back in April’s final against Hartpury, Cardiff Met saw the Championship crown slip away from them, but that disappointment could spur them on this term and with a squad full of potential, they will be looking to build on a positive 2017/18 campaign.

Durham University highlighted their qualities at the back end of last season as Alex Keay’s side produced an excellent performance at West Park Leeds Rugby Club to clinch the BUCS 7s title.

After Durham’s success in Yorkshire, Keay admitted that his XV-a-side squad had found life tough in BUCS Super Rugby last season and too many times, they were on the wrong end of some close results.

The north-east outfit have always been ambitious and after winning just four matches throughout the course of last year, they will be aiming for a stark improvement if they are to deliver consistently enough to challenge for honours this season.

The University of Exeter are beginning the new season hoping to go one better this year. The Green and Whites clinched the BUCS Super Rugby domestic title, but fell at the semi-final stage of the Championship competition to deny them a third consecutive Twickenham appearance.

Keith Fleming’s side will no doubt be challenging for the league and cup double this season and with the likes of Sal M’Boge, Sam Morley and Jack Rouse at their disposal, Exeter will be a force to be reckoned with in the 2018/19 campaign.

It was a familiar feeling for Hartpury back in April as they retained their BUCS Super Rugby Championship crown in some style against Cardiff Met.

The Gloucestershire side had a sluggish start to their title defence, but just before the turn of the year, Hartpury clicked into gear. The domestic trophy was one step too far for Sean Lynn’s men, but in the knockout rounds, it was all to play for and they showed their class.

Once again, Hartpury tasted Twickenham success and they are the ones to beat this year. They looked extremely sharp in the second half of last season and if they can carry that intensity into the new campaign, the current champions will have a fantastic opportunity to make it a hat-trick of BUCS Super Rugby titles.

For Leeds Beckett, this season will be about building on their much-improved performance of last term.

The Yorkshire side lost all 14 of their BUCS Super Rugby matches in the 2016/17 season, but Beckett responded by finishing in the top four and now they are looking to kick on.

Rugby Programme Manager Kerry Wood described university rugby as a ‘transitional cycle’ and after a couple of years of learning and developing as a side, Beckett could be ready to launch a serious bid for silverware for the first time since 2015.

Loughborough University are maybe one of the sides that will be keen to forget last season and focus on the future ahead.

The Midlands club finished in the top three in 2016/17, but last term, inconsistency plagued them throughout the campaign so they will be hoping they can carry those lessons into this season.

Loughborough’s last Twickenham appearance came in 2016 and with a mixture of players overlapping between their BUCS side and their National One team, they do have the resources available to compete for top spot on the university stage.

Nottingham Trent had quite a strange season last year. After earning promotion from North A, the then newly promoted side managed just two wins from their 16 domestic games.

It meant the Midlands club finished at the foot of the BUCS Super Rugby table, but what will be encouraging for Trent, is the way they ended last term. Those two aforementioned victories came in their final fixtures of the season and they also went on to beat Durham in the BUCS Super Rugby Championship Round of 16.

With their strong links to Nottingham, plus the way they concluded the 2017/18 campaign, Trent will feel like they can really compete this season as look to improve in their second year at this level.

Rugby in the North East of England is certainly on the up and the thriving link between @FalconsRugby and their local @BUCSsuperrugby clubs is only adding to the positivity.... #GallagherPrem #unirugby pic.twitter.com/R81pe909Jr

Northumbria University, along with Cardiff Met, were the surprise packages of last season. Following their sixth-place finish in 2016/17, Darren Fearn’s men blew everyone away and thoroughly deserved to end the last campaign in second place, only narrowly missing out on the domestic title to Exeter.

A disappointing defeat at home to Bath in the semi-finals would have been tough to take for the north-east side, but this term, no-one will underestimate Northumbria especially with the likes of Newcastle Falcons’ George Wacokecoke and James Elliot ready to take BUCS Super Rugby by storm.