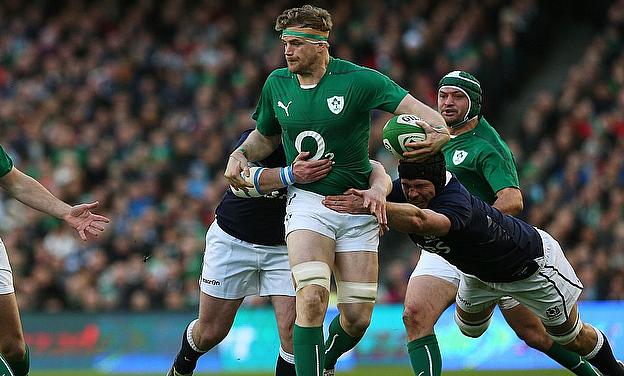 Unruffled Ireland refused to let Munster lock O'Connell's absence shake them off their stride, dispatching Scotland in what ultimately became a routine victory.

But Kiwi boss Schmidt will be at pains to warn Ireland just how much of a step up the visit of Wales will prove in round two on Saturday.

After the gut-wrenching 24-22 last-gasp loss to New Zealand in November, Ireland were desperate to hit back to winning ways.

Objective one complete, Schmidt will demand more when Warren Gatland and Wales roll into town next week.

Scotland dominated territory and possession in a gritty first-half, only for Ireland to break that stranglehold in the final exchanges.

Scott Johnson has been at pains to build an extra attacking dimension to his Scotland side.

The visitors were prepared to whip the ball wide at every turn, but in doing so failed to find sufficient midfield incision.

Impressive number eight David Denton powered close after a scrum deep in the Ireland 22, that followed the hosts failing to clear their lines on a number of occasions.

After that Scotland were unable to threaten seriously again in the half, with Duncan Weir's drop-goal fake not leading to any gain.

Laidlaw struck the post with a penalty after five minutes, and later he punted to the corner when he should have shot at goal.

Scotland lost the ensuing line-out, squandering any points at all in going for the ill-judged jugular of a try.

Crucially the hosts kept defensive shape and discipline, admittedly escaping punishment when O'Driscoll was rushed into a blind pass from a set scrum move that gifted Scotland good field position.

As time ticked down on the half, Sexton slinked through two Scotland tackles to race from danger zone to the other.

The Racing Metro fly-half fired out a pass to captain Heaslip, who cantered down the left wing heading for the corner.

The Leinster loose-forward touched down as he rolled the tackle, only for TMO Carlo Damasco to rule him in touch.

Ireland sustained the pressure from two driven line-outs in the Scotland 22 though, claiming just reward for persistence when Trimble sneaked home in the right corner.

Heaslip capped a water-tight driven line-out as Ireland wrestled control after the break, bundling over to blunt the Scots' power.

Dave Kearney was forced into touch in his own 22 after misreading Weir's punt into the corner.

Toner hit a ruck from the side after the line-out to gift Scotland a penalty, and Laidlaw delivered the points from the tee.

Ireland then built tight phases for the first time in the match, Henry blasting in three times, with O'Mahony, Heaslip and Best all burrowing in too.

Sexton's wayward pass handed Scotland a scrum, but Ireland managed to turn it over.

Luke Marshall found Dave Kearney with a dangerous wide pass, before Ireland won a penalty with Scotland killing the ball.

Ireland punted to the corner, pushing for their second try.

And skipper Heaslip delivered after a fine driven line-out, to make up for the score ruled out in the first half.

Sean Lamont strayed offside to hand Ireland a kickable penalty, and Sexton slotted his third goal of the day.

Weir's astute chip into the left corner forced Ireland into a pressure line-out five metres from their own line as Scotland battled for a foothold.

Replacement Jack McGrath produced a fine turnover to set Ireland back on the front foot, only for Tim Swinson to steal an intercept.

Ireland recovered the ascendancy though, with Sexton's tactical kicking to the fore.

And the hosts added their third try when Rob Kearney capped a neat break from Henry, for a score on his 50th cap.

Schmidt emptied his bench with the match clearly won, with more than one eye on the fast-approaching visit of Wales to Dublin, on Saturday.

Scotland's replacements battled manfully to force some kind of consolation, but in truth the visitors were outclassed.

Paddy Jackson's chip almost put Dave Kearney in for a try at the death, but the TMO ruled it out.