Discipline stopped us against Ireland - Dingwall 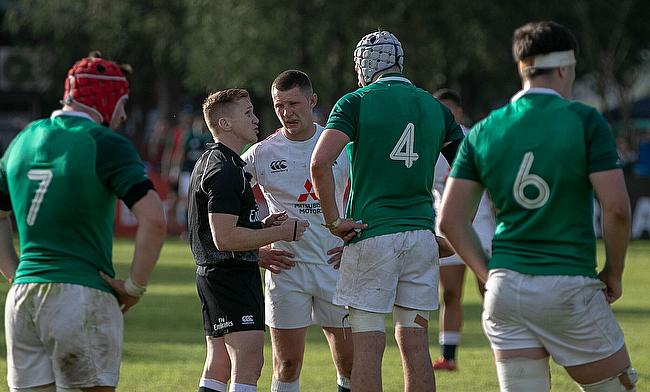 Ireland stun England in opening round of World Rugby U20 Championship
England U20s boss Bates: Players will want to 'dish out payback' against Ireland
We want to make our own legacy - Sleightholme
We owe one to Ireland - Fox

Fraser Dingwall has admitted discipline hampered England’s chances of beginning the World Rugby U20 Championship with a victory after they lost 42-26 to Ireland.

Four months after falling to a narrow defeat against the Irish in the U20 Six Nations, England were keen to redeem themselves.

Steve Bates’ side flew out of the blocks thanks to an Ollie Sleightholme try, but England’s temperament let them down as both Aaron Hinkley and Manu Vunipola were yellow-carded.

Alfie Barbeary was also sent-off in the second-half and the forward won't play any further part in the tournament after receving a five-match ban for 'lifting and dropping' an opponent.

“The mood was low in camp because of the Ireland result, but it is about getting a response from the next two games because that is all we can really do,” Dingwall explained.

“I did think we played well for large parts of the game and had the upper hand so it was frustrating that we didn’t build on top of that.

U20s Highlights: @IrishRugby get their #WorldRugbyU20s Championship started with a win after epic encounter with England pic.twitter.com/hjl0QsqNWt

“The thing that probably stopped us a little bit was probably our discipline. We gave silly penalties away which let them back into the game, as well as our poor accuracy at times. If we had been more accurate in everything we did, then I don’t think the Irish would have been able to get into the game.

“We weren’t quite good enough in various areas, but if we tighten a few screws, then it will be a completely different outcome.”

In attack, the Young Roses did look threatening and Dingwall played an integral role in Sleightholme’s second score just after half-time, but he believes England need to sharpen up in other areas if they are to bounce back in their next game against Italy.

“I think we can only think about ourselves,” the Northampton Saints man added.

“If we can be more accurate, then it gives us a good platform because our defence was very solid. If we can stop giving teams ‘easy ins’ like penalties at the ruck, then we will very much be dominant.

“We scored some good tries against Ireland and it shows that when we get things more accurate, our attack is very dangerous. It is just a shame we didn’t manage to do more of it and that let them into the game.”

Steve Bates’ side will know they cannot afford too many errors in their remaining pool matches against Italy and Australia.

In the U20 Six Nations, England struggled in the first-half when they faced Italy back in March, but they were able to race clear in the second period and with the Azzurri to come on Saturday in Santa Fe, Dingwall expects another tough contest.

“They [Italy] are a strong side,” the England captain said. “They asked a lot of questions of Australia in their first game of the tournament and I am sure they will do the same to us.

“It is a team you can’t take lightly and they will target having a big pack up front. They are a very passionate side so we have to focus on ourselves in order to respond.”

Australia beat Italy 36-12 in their opening fixture of the World U20 Championship and with Jason Gilmore’s side currently topping Pool B, England know they must gain a positive result against Italy before facing the Junior Wallabies on June 12th.

Dingwall added: “Yes it [Italy game] is a must win, but if we want to go far in the tournament, you have to focus on winning each game.

“The tournament doesn’t last for one game and it is not over for us. There are still two more games and if we can sort a few things out, we can still get into the semi-finals. The real thing for us now is to focus on the Italy game and taking the Australia one when it comes as well.”