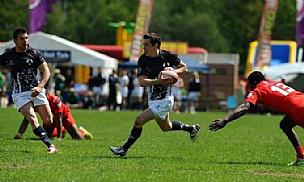 Combine an American Footballer with Usain Bolt, throw in a music festival and fancy dress and you have the phenomena that is 7s rugby. During May there have been animals at Twickenham, naughty schoolgirls at Kinsale and Roman Emperors at Manchester. This can only mean that Rugby Sevens is back in town.

Long seen as an off-season low impact,keep fit version of rugby; Sevens is now emerging as a stand alone sport with Olympic and Commonwealth Games recognition. Many argue it is one of the world’s fastest growing sports. It’s a rugby party;it’s a full blown festival that goes beyond just watching the game.

Major global sponsors are now heavily invested; they include Heineken, Emirates, HSBC, Party City,Marriott, Cathay Pacific. It is interesting to note that the only International competition in the USA is in Las Vegas – that makes sense!!

There can be no better venue to fully describe what 7s rugby is all about. Its non-stop, fast flowing and ablur with action every second. Thinking about it, that sounds like Hangover the movie but it is Rugby 7s. Last year at the Las Vegas tournament, players scored tries, on average, every 80 seconds.

At its heart is the same size pitch as traditional 15 man rugby but with half the players that means‘SPACE’. That is what every coach dreams of; space allows players to score more points. The inclusion of Sevens at the Rio Olympics in2016 has create a change in the levels of funding that national sporting bodies are making available; most notably the USA but beware of China. Sevens is well suited to the Olympics with games being two halves of seven minutes. This allows organisers to have up to 30 games per pitch in the day.

The game of Rugby 7s appears to be moving away from what a rugby player does over the summer and towards specialist 7s players who have full time contracts. Nations are emerging in the field of Rugby Sevens in un-paralleled way. Countries like the USA, Kenya, Spain and Portugal. These countries are setting up dedicated training centres and employing top international 7s coaches; for example Mike Friday.

All over the world the party is growing. At the highest level Rugby Sevens is a competition between national teams with HSBC Sevens World series and the RWC ( Moscow June 28-30 2013 ). You can find more details on rwcsevens.com and irbsevens.com

There are then invitational events that run alongside these competitions above; most notably Hong Kong and Dubai. Party themes continue to grow with great tournaments established in Scotland, Ireland ( Heineken Kinsale 7s celebrated its25th anniversary this year ), UK and the Netherlands. The Bournemouth Festival is gaining importance as a festival. Prize money is at the low end for elite teams and the costs of access for players expensive. However, the organisers are able to attract 20,000 to the festival by combining great rugby with a music festival.

Elite and Social Teams compete alongside each other and it really is non-stop rugby 7s of the highest quality. The party atmosphere never stops and from 10am until mid-night you can combine live music with International rugby.

Some teams will compete for prestige,some teams for the prize money but all of them for the party atmosphere. 2014 sees more new venues added most notably Argentina;see you there for Rugby and Salsa!!!

Sevens season begins with a blast