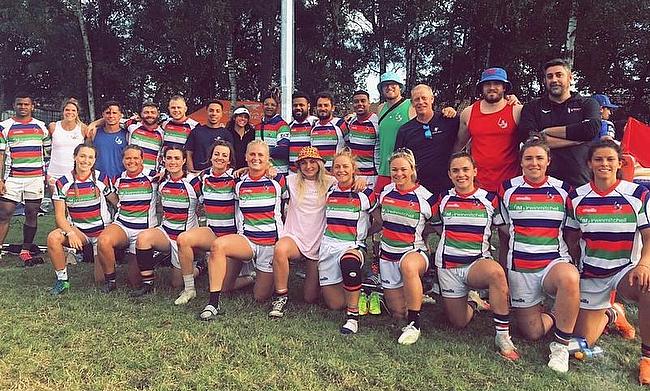 Australia edge out New Zealand 19-14 to win London leg of World Rugby Sevens Series
Emerging Talents and The Ones To Watch | Rosslyn Park National Schools 7s
Bournemouth 7s - The Sporting Glastonbury is Back!
All eyes on the Home Nations for English Universities Sport

For many Sevens players, last summer just wasn’t the same.

With tournaments having to be cancelled or rescheduled due to the impact of Covid-19, rather than teams clocking up the miles across the UK or even hopping on a plane to take part in competitions abroad, their weekends suddenly became free.

Some clubs would have feared the worst. With limited or no rugby at all on the amateur Sevens circuit, how would they rebuild their team? Would sponsors pull out? Where would their funding come from for 2022?

As restrictions did begin to ease 12 months ago, it did allow a sprinkling of tournaments to go ahead but the process of preparing and hosting an event - with the pandemic still very much in people’s minds - presented a huge challenge for competition organisers.

In the case of Bournemouth 7s, the forward-thinking of CEO Roger Woodall meant the ‘Sporting Glastonbury’ moved to the Bank Holiday weekend in August but after a Sevens calendar which was disturbed and disjointed in 2021, the sense of normality and enthusiasm is now palpable on the circuit.

Already, various competitions have taken place in their usual slots and this weekend, Bournemouth will be no different - other than shifting a few days into June due to The Queen’s Jubilee.

It is a tournament which continues to be at the front of the pack and with thousands expected to flock to the south coast, the quality of Sevens which will be on display will be in sharp focus and those attending Bournemouth wouldn’t have it any other way.

Among those competing towards the top end of the tournament will be the English University 7s and the Wooden Spoon Marauders 7s.

“Absolutely delighted,” says English Uni 7s Head Coach Rob Jones. “First of all, you are back working with other great coaches with Jeffers [Mark Jeffreys] and Hubsey [Alan Hubbleday] and the rest of the team so just being around those people again is brilliant. Working with the outstanding athletes across the country and bringing them together and just giving them that opportunity to put on the shirt again is superb.

“We are definitely working with a smaller budget to what we have had in the past but everyone on the committee at English Uni’s across the board has worked so hard to give this opportunity to the players so massive, massive credit to them.”

English Uni 7s are seemingly in good shape heading into their only tournament of the summer, but due to financial constraints last year, they were unable to attend Bournemouth.

With minimal university rugby taking place in 2020-21, for Jones and his fellow coaches to even piece a men’s and women’s team together was a challenge in itself, but with the BUCS season resuming in its usual guise back in September, squad selection for this summer was less of a headache.

However, given the cyclical nature of student rugby, pulling together a group of players from all corners of the country is never an easy task: “There is so much happening across the university calendar so where do you put a trial for example, especially around exam time for many students?” adds Jones, who hosted a trial event at Manchester Met University back in April.

“I was at both the BUCS 7s Championship and the Trophy and there was so much talent across both tournaments so we definitely picked up some class there. You can see by the universities which are being represented in our teams, across both the men and the women, there is a real mixture.

“There is just some outstanding talent. There is some absolute class there that I am convinced will go on to big contracts and have a really successful rugby career. Despite everything, I actually think we couldn’t have picked two stronger squads!”

Across both teams, 12 universities are being represented with a flurry of players beginning to forge their careers in the sport. The likes of Ronnie du Randt [Nottingham Trent] has represented England 7s whilst on the women’s side, Mia Venner - who has been capped by the Red Roses - spearheads a strong Hartpury contingent who won the BUCS National League this term.

The opportunity Jones and his coaches are providing players does have its parallels with the Wooden Spoon Marauders. Whilst English Uni 7s has been tailored around featuring at just Bournemouth this summer - with the vision to relaunch the Home Nations competition in 2023 - WS Marauders are certainly one of the more established clubs on the circuit, highlighted by the success of some of their past and present representatives.

Grace Compton (Bristol Bears), Ellie Boatman (Wasps) and Lauren Torley (DMP Durham Sharks) have been involved with Team GB and the England 7s set-up this year and the latter is actually part of the English Uni 7s squad for Bournemouth due to her affiliation with Newcastle University.

Our student athletes are currently preparing for the upcoming @Bournemouth7s festival on Friday 3 & 4 June ??

Please join us in congratulating all the students who have been selected ??

“Last year, we had a large number of our squad - both men and women - get capped and move on to professional rugby so there was a big hole to fill this year!,” WS Marauders Director of Rugby Keith Boatman tells TRU.

“When you look at the squad, it is difficult to pick players out because they are all at a really good level. We have got guys like our captain Louis Flynn on the men's side and Adam Hakimian who plays for Barbados and he came through last year. I think he is going to be a real star.

“We have got a young lad, Jonny Searle, who is ex-Brighton College, and he is playing some really, really good rugby and I think he is someone who is on the fringe of the England squad. I think it would be very wrong not to mention our Fijian colleagues as well.

“Our squad has probably got at least a 30 per cent Fijian element and they bring a flair that you can't comprehend at times. They are fantastic and some have gone on to represent their nation. If anyone was saying, 'why would you watch the Marauders?’ I would say it is that eclectic mix of Fijian, English and Welsh players which is phenomenal.”

Last year, the talented WS Marauders teams were able to attend a handful of tournaments on the SuperSevensSeries circuit as well as Bournemouth, and as they prepare to depart for the south coast in 2022, they have already played in five competitions including a trip to the Costa Blanca 7s two weeks ago.

Whilst Boatman is delighted to see both the men’s and women’s sides back in full swing, he admits there was “some worry” in 2021 because of the impact of the pandemic.

The unwavering support from their sponsors and kit supplier helped one of the oldest Sevens clubs in the UK navigate their way through a difficult period. The fact WS Marauders can now showcase their quality at the flagship competitions this summer as well as promote the amazing work of their partner charity - Wooden Spoon - is the “real achievement” according to Boatman.

The charity and the club will celebrate their 40th anniversary next year and whilst WS Marauders will want to enter 2023 on the back of a successful Sevens campaign, there is very much a sense that this weekend is also an opportunity for this level of the sport to shine in the spotlight.

Boatman and Jones will hope to see their respective sides go deep into their competitions but considering the amateur Sevens circuit is seemingly finding its feet once again, the experienced coaches are aware of the bigger picture for both their teams and their players.

“The whole English Uni 7s programme is designed to give people an opportunity and to put them in the shop window and people will be watching,” says Jones. “When you put on that shirt, you become a target, don't you? There is a real hunger as well to perform and not just be happy with being selected. They want to just go out there and make a name for themselves which you have to admire.”

“We have had a history of players going into professional rugby out of our academy structure and for us, it is still about encouraging young players,” Boatman adds. “It is about development as well as performance.

“At Bournemouth, you have got some really, really top sides. I think the really good thing about Bournemouth is there is a big crowd. If you are going to be a top international player, you have to be able to perform under pressure. Having a big crowd creates its own pressure and puts you in focus. That experience is invaluable to aid player development.”

And for teams like English Uni 7s and WS Marauders, the talent and action on display will be captured by Veo, a global leader in AI-powered sports recording and analysis.

In total, they will be filming on six pitches across the course of the weekend and they have already given us a glimpse of what to expect from the WS Marauders in particular, with the club utilising their technology.

Veo were in attendance at Bournemouth last year and Boatman was impressed by the added coverage they provided.

“Veo gave us the ability to watch back our performances from Bournemouth 7s,” he says. “It just allows thousands of people who aren't there to actually watch back afterwards and that is spreading the game. It is also giving those players that platform to perform on. I know that several of our players have been spotted through the videos and have consequently gone on to play professional or international rugby. That is a real help.

“The concept of Veo where you can just put it on the pitch and you don't have to have camera operators all the time is invaluable because it makes it attainable for the average tournament and coaches at these events rather than just the pure elite and international level.”

With the festival announcing it was effectively sold out on Tuesday, the excitement is building towards another packed weekend.

It is a tournament which is earmarked right at the beginning of the Sevens schedule and despite 2021 throwing some spanners in the works, from teams competing at the elite level like English University 7s and Wooden Spoon Marauders right down to your social sides, everyone is ready to go again.

“A lot of clubs make the mistake of forgetting the fun element,” Boatman adds. “The fun element is really, really important. In all the research when you look at why do people play Sevens, the number one factor is enjoyment. You get enjoyment in buckets full down at Bournemouth. You have to control it to an extent because if you take it too far, you are not going to perform but is a lovely balance for the guys and it is really, really social and let's not forget that.”

“Sometimes you go to these events and everyone is so serious,” says Jones. “It has got to be fun and the ability to be able to switch on and switch off is key.

“When we looked at the tournaments we could go to, Bournemouth was the obvious one because of the crowds. I hope we are on the podium at the end of it and the guys can go and have some fun on the Saturday night, but we just can’t wait to be back playing some high-quality Sevens again.”