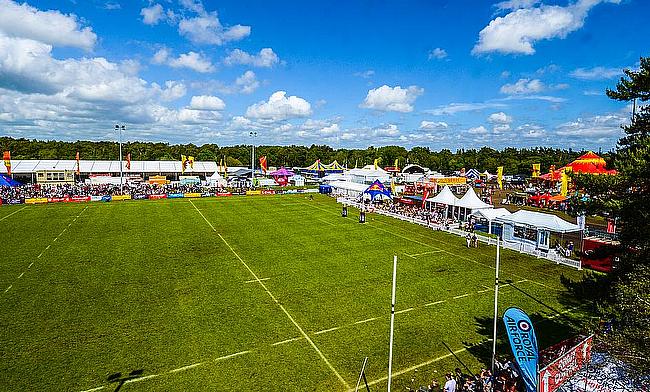 Why the 'Sporting Glastonbury' can spark the amateur Sevens circuit back to life
Jamie Adamson Exclusive: “As far as sevens seasons go, it is a big year”
Watch: 'I've seen the elite level - I just want to keep progressing!' Emerging Talent | Connor Cross
Bournemouth 7s - The Sporting Glastonbury is Back!

At the beginning of the month, Bournemouth 7s opened its gates once again as the ‘Sporting Glastonbury’ returned for yet another year.

The event on the South Coast mixes sport and music together to create one of the standout weekends on the calendar. From a Rugby Sevens point of view, it is a breathless few days of high-quality action with some of the best amateur teams on the circuit showcasing their talent.

It might be a sweeping conclusion to suggest Bournemouth 7s is the most impressive tournament on the schedule, but judging by some of the tries scored during this year’s competition, it is hard to disagree with that viewpoint.

Capturing some of the very best moments were Veo, a global leader in AI-powered sports recording and analysis and in total, they covered five pitches across the weekend.

One of Veo’s many qualities is for players to self-analyse their performances, but who doesn’t like watching themselves produce an outrageous piece of skill or score a scintillating try?

Here are some of the highlights from the Class of 2022:

The Cherubs RFC competed in the brilliantly named Cider Cup this year and everyone at Bournemouth 7s would have been raising a glass to this superb try. THE DUMMY!

The reactions are great too!

This next clip might not be what Rugby Sevens is most famous for. Take it away Underdawgs. Ouch!

Now, Sevens is a game of skill and sharp thinking and the lads at Beer Battered Rugby, who were competing in the 10s competition, optimised this perfectly. The flick of the hand is all it takes…

Millfield is one of the most established rugby schools in the country with many of their former pupils going on to achieve great things in the game such as former England captain Chris Robshaw and current Saracens star Mako Vunipola.

The talent which the school nurtures and produces cannot be understated and a few of their old boys showcased that at Bournemouth. Teamwork most certainly makes the dream work...

It is not just the exceptional pieces of individual brilliance Veo picks up. It can even spot something which the officials might not have seen….Veo never misses a moment.

And finally, we all know the quality of Cheslin Kolbe. The World Cup winner is one of the most skilful players on the planet.

Wearing a scrum-hat out on the wing has become a trademark of his and one of the players at Lonely Goats 7s channelled his inner Kolbe. From South Africa to the South Coast….

If you want to see more action from Bournemouth 7s or want to pick out your very own Veo moment, footage from Pitches 2, 3, 4, 5 and 6 is now available. Just click HERE

If you also like what you see from Veo, you can claim a £100 discount on your very own camera by using the code TRU100 at checkout.