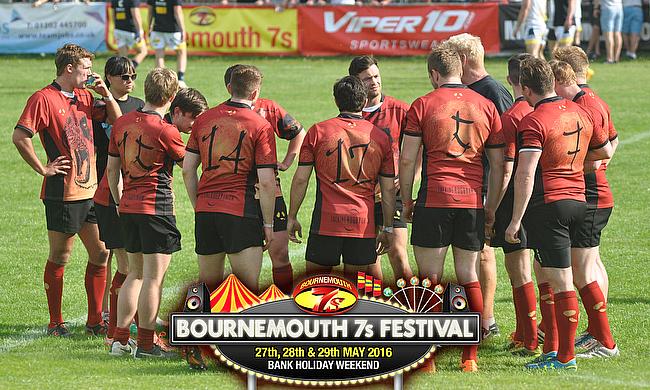 Fiji coast to World Sevens Series quarterfinals despite defeat to England
Habana sets his return to sevens off with a try
Bournemouth 7s Delivers On All Fronts
Bournemouth 7s Festival: The Sporting Glastonbury

With the sevens spotlight firmly on the coast of Brazil this summer, much closer to home, attention turns to the shoreline of England as the biggest sevens tournament in the country takes centre stage this Bank Holiday weekend.

The ninth edition of the Bournemouth 7s Festival – also known as the ‘Sporting Glastonbury’ - will welcome 30,000 people and 400 different sports teams to the picturesque setting of Bournemouth Sports Club for a bumper weekend of great sport, live music and superb entertainment.

It is the world’s largest sport and music festival which sees over 5,000 players competing in a wide variety of social and competitive tournaments in Netball, Hockey, Dodgeball and of course Rugby.

The National Cup for Rugby7s is the main event of the weekend with the elite competitions across the sport welcoming some of the best talent in the country.

12 months ago, Black Sheep were able to retain their National crown but won’t be bidding for their third straight title as they will be competing in the Bulmers Cup (The Social Cup) this year. They beat a strong Viper 10 Allstars side 33-26 in the Elite final last May, but now the tournament really is anyone’s to win this weekend.

Other formidable teams competing in the Viper 10 Cup (which is the elite competitions) are the RAF Spitfires - who won the plate competition last year - Viper 10 Allstars and Brayanston 7s, National One side Esher, The British Army and Red Panda 7s.

Red Panda will be supporting the national charity Tom’s Trust this year. The charity funds clinical ppsychologists who work within the UK’s first ever rehabilitation service based in Cambridge. They support children with brain tumors and their families from the point of diagnosis, throughout treatment and beyond.

Away from the National tournaments, there are seven other competitions which are taking place including the Ladies Beer and Cider Cups where a few teams will be making their bow at Bournemouth this year.

From the high quality rugby, to the top notch entertainment which is always on show at this festival. Fatman Scoop has officially been announced to be the headline act while General Levy will also be performing in one of 10 themed Festival Arenas.

There is something everyone at Bournemouth. There is a brand new iPro Sports Zone for the family day on Sunday, a big screen showing the live sport (most likely the Premiership Final between Saracens and Exeter on Saturday) and a range of competitions supported by some of the UK’s most recognisable brands. You can also set up camp at the Viper 10 Campsite located just 50 metres from the main festival arena or if that is not for you, why not try the Glamping Packages.

Also, in celebration of the 2016 Rio Olympics, this year’s fancy dress theme will see festival goers fasjiong their interpretation of Olympics vs Carnival.

In truth, this is just a snapshot of all the great sport and entertainment that will take place on the South Coast this weekend. It will no doubt be another outstanding festival of sport, entertainment and music so if you’re interested in attending, there are still tickets available, but I’m sure they won’t be around for much longer. Click on the link for all the available tickets and their prices:

Keep up to date with all that goes on at the Bournemouth 7s this weekend via Talking Rugby Union’s Twitter Account @TalkRugbyUnion as well as Red Panda 7s’ account: @redpanda_sports