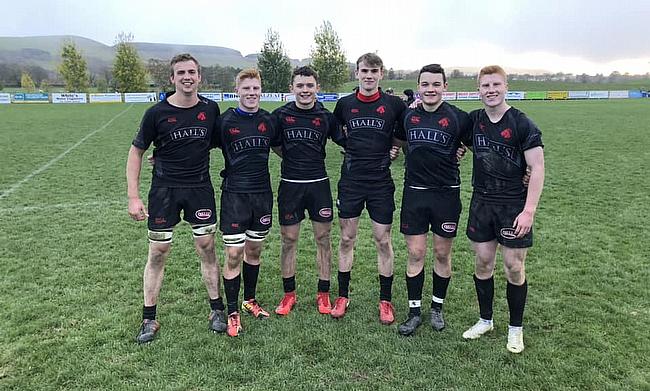 Murrayfield ambition fulfilled for Horne brothers
Meet the Scottish women's side who trained with Gregor Townsend
'That email came in February and by the middle of March, I was living in Budapest'
Scotland's Craig Jackson has had a summer to remember

Biggar has always been a proud community club within Scottish rugby - and this term they have also been keeping things in the family with three sets of brothers running out for the first XV.

When they hosted Preston Lodge at Hartreemill late last month, they went into the game having won their first eight matches in Tennent’s National League Division Two.

They continued the good run that afternoon with a comprehensive 49-0 victory and on the day, three sets of brothers played for the team with one brother from each pair scoring a try.

Eighteen-year-old twins Matthew and Lewis Stewart were involved at centre and back-row respectively, with the former crossing the whitewash.

Centre Gregor Stewart, 21, and younger brother Rowan, 18, played with the latter scoring a try from the wing.

And second-row Jamie Orr was a try scorer with the 23-year-old’s younger brother Robbie, 18, turning out at full-back.

Matthew and Lewis have played in the same teams since they were young coming through the ranks, but the former admits it is extra special playing for the first XV together.

“It is great being in the same Biggar team as Lewis,” Matthew told TRU.

“We obviously play in quite different positions, but we have grown up talking about and playing rugby, so to have come into senior rugby and been part of a team that has got off to a good start has been brilliant.

“We still have a lot to learn, but in general, it is a pretty young team so we are all on this exciting journey together and we are all good mates which means that the team spirit is really good.”

Rowan is the same age as Matthew and Lewis and he has made a seamless transition into senior rugby having scored 18 tries so far in 2018/19.

“Our family has had links with Biggar for quite a long time with dad being involved so the family have been proud to see myself and Gregor in the same team,” Rowan stated.

Spot the difference??
.
.
6 of the superstars that were apart of our 49-0 win yesterday over PL?? all three sets of brothers contributed at least one try to the win and its the first time they have all played... https://t.co/hG5ONQFWgg

“Because Gregor is a few years older than me, we never played in the same age-grade teams growing up, but to have him at centre nearby me in the team is reassuring and a big help.”

And Gregor joked that he has been the one setting Rowan up for his superb try tally as the weeks have gone by.

“Joking aside, it has been really good having Rowan in the team with me,” Gregor said.

“He has been doing really well and seems to learn quickly and it would mean a lot to us both if we can continue playing our part in a good season for the club.”

And the Orr family probably spend more time than most at Hartreemill with the two brothers training and playing regularly, their dad being the vice-president, sister Alison being the physio and younger sister Emma playing for the girls’ age-grade team.

“Yes, we are hardly away from the place at the moment,” laughed Robbie.

“Jamie has been in the first XV for quite a while now and it has been really helpful for me having him there to talk to and ask about things when I have to.

“There is such a great buzz about the place just now, the clubhouse is often full after games and we just want to try and stay at the top of what is a difficult league.”

Since the victory over Preston Lodge, Biggar won a further game away from home against GHK (61-7) to make it 10 wins from 10 before suffering their first loss last weekend at home to old rivals Peebles (10-7).

That means that Biggar are top by four points ahead of Highland in the 12-team league as they prepare to face Dumfries this weekend.

It is going to be quite a battle to see who ends up in top spot come the end of March, but with the Stewarts, the other Stewarts, the Orrs and their team mates pulling in the same direction, Biggar will certainly give themselves a chance.

They are also coached by Gary Mercer, the father of Zach who is set to start for England against Japan this weekend, and it is great to see him giving so much youth - and brothers - the chance to shine.