Meet the Scottish women's side who trained with Gregor Townsend 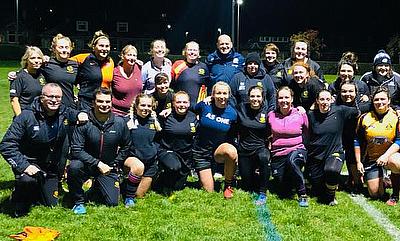 He's an excellent player with a big future ahead of him - Townsend
'That email came in February and by the middle of March, I was living in Budapest'
Scotland stars beginning to develop a French connection
Scotland star Jade Konkel aiming to shine in Tyrrells Premier 15s

It is not every day that an international head coach pops along to your training ground on a wet and windy midweek evening to pass on their knowledge.

So, there is no doubt that Greenock Wanderers Ladies team will head into their first post-split Tennent’s Women’s National League One Pool B fixture this Sunday with a spring in their collective step.

That is because, recently, Scotland men’s head coach Gregor Townsend took time out of his busy schedule preparing for four Autumn Tests to take a session with the squad at their Fort Matilda ground.

Team member Lesley Cadenhead entered a competition on Facebook via Vitality UK and thought nothing more of it for a few weeks.

“Someone made contact with me saying that I had won the competition and at first I thought it was a joke, but then I started getting emails through and it was all a bit real,” Lesley said.

Team captain Hannah Mutton, 24, takes up the story and told TRU: “Thousands of people entered so we just hoped that we would be the lucky ones to win a training session with Gregor.

“We were all so excited and shocked when one of our forwards Lesley told us that we had actually won! The team Whatsapp group went a bit mad and we were talking about it every night in the build up to the training session.

“We saw it as a once in a lifetime experience that we needed to grab and we are extremely grateful for it.

“As the night approached there was a lot of excitement, but also some nerves flying about.

“A few of us were quite nervous, but as soon as he arrived we all calmed down and just enjoyed every minute of the session. He was very down to earth and had a laugh with us throughout the training.

“The experience was unbelievable and one that we will all treasure.

“Everyone gave it their all and the tempo during the session was brilliant. He helped us to work on the basics, gave us lots of attacking tips and was very positive throughout.

“At the end we had a Q and A section with him where we were able to ask him for any advice. The most useful message he gave us was to stick together as a team and support each other through the highs and the lows.”

Huge thank you to @gregortownsend for coming down to coach our @gwrfcladies tonight! Amazing turnout and such a buzz?????? #legend pic.twitter.com/R6FuxCxwDK

So, has the session left the squad feeling on a high ahead of their final three league matches of 2018?

“We had a bright start to the season and then a couple of hard games. He boosted everyone’s confidence by saying that he thought we had a very strong team with a lot of skill and potential. Hearing that is exactly what we needed at that time and helped to raise some heads.

“We now look to compete in Pool B after the split. We hope to once again build as a team, score some tries and put pressure on other teams.

“We would love to win our section post-split, however, we are up against some strong teams and are aware of the hard work that we will need to put in to be able to do this.

“We have been a team for nearly five years now and it’s amazing to see lots of new and experienced women’s teams doing so well across Scotland.

“We have an under-15s girls team which is gathering momentum and within our own team, we have had girls that have been playing since the team was formed and many others that have joined along the way and had fun learning this great game.

“All of them and the other teams across Scotland contribute to the growth in women’s rugby.

“Personally, I started playing almost five years ago when the team was formed, I was a gymnast who had never played rugby and thought I would never be able to tackle someone!

“One of my friends Caitlyn Haldane formed the team and asked if I would come along to a session. I went and haven’t looked back since.

“I’ve made friends for life over the years who have been there for me on and off the field. They are a fantastic group of girls who make this sport a very special thing to be part of. I’m extremely lucky to be their captain and will look back on this time with immense pride.”

Townsend enjoyed the session with the Greenock girls and said: “I enjoyed it, they were great fun, a good team and they had plenty of skill too.

“Rugby is a brilliant sport because you can form strong social bonds and get some exercise at the same time - the girls certainly had smiles on their faces which was great to see.”